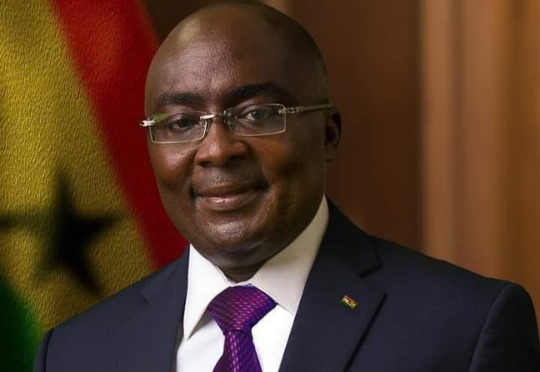 The Vice President, Dr.  Mahamudu Bawumia, has reiterated his conviction in the indispensable role technology plays in the transformation of economies in the 21st Century.

Speaking at the launch of the Ghana Electronic Pharmacy Platform (ePharmacy) – Africa’s first national-scale ePharmacy in Accra on Monday, the Vice President, who has been credited with Ghana’s ongoing digital transformation drive, highlighted the value of the global digital economy, adding that countries that do not embrace it, will be left behind.

“According to the data, the global digital economy is valued at $11.5 trillion (15.5% of GDP). Global cocoa market on the other hand is valued at S12.6 billion,” Dr. Bawumia said, to buttress his point on the need for a developing economy such as Ghana to prioritize digitalization for economic growth.

“This is why we are focusing on these ideas, systems, and institutions.”

The Vice President laughed off and labeled claims he has stopped economic issues and focused on the digitalization of the economy as ignorant, adding that those who make these claims do not know the inseparable linkage between digitalization and modern economies.

“People will say, ‘Oh, you’re not doing economics.’ But your economy cannot function in the 21st Century if you don’t have the systems and institutions. That is why we are focusing on building all of these systems; the digital platforms as we go forward in the 21st Century,” the Vice President said, adding that the country’s ongoing digitalization drive has significantly boosted efficiency and revenue at some digitalized government agencies while also restricting many corrupt practices.

“Our interest as a government in digitalization stems from the fact that the 4th Industrial Revolution is a digital revolution.” “Digitalization helps us to reduce bureaucracy and corruption in the delivery of public services, increases efficiency, reduces the cost of doing business, and makes life easier for Ghanaians by solving problems through the use of digital platforms,” he said.

Dr. Bawumia said, in spite of all these, the government’s digitalization drive, is confronted by “people with the minds of impossibilities” who have doubted every digital innovation the government has initiated.

He listed a number of these innovations, which when he announced, such people said he was lying, but they have since been implemented and are being used by Ghanaians.

“They do not realize that through the Ghana card, we have been able to increase the proportion of Ghanaians with Tax Identification Numbers from 4% when we came into office to 85% too.”

“People did not understand why the Ghana card, certified by ICAO, could be used as a travel document and they mocked the idea. Today, it is a reality and our diasporans can use the Ghanacard and travel to Ghana without a visa.”

“People could not understand how the zipline medical drone service could be used to deliver medical supplies to save lives. They tried to convince people that drones were to be used for taking pictures of women in bathrooms. Today, as we speak, Ghana has the largest drone delivery service in the world. “

“Unfortunately, for people of governments that try to lead our country to a new level, they are confronted with a mindset that only sees impossibilities; a mindset that refuses to believe that an African country like Ghana can lead the world in implementing digital technology.”

“This is why I enjoy proving the skeptics wrong all the time. Usually, when I say we are going to do this, they say he is lying. And when it comes, they keep quiet. Ultimately, we must all remember that you cannot transform an economy with just brick and mortar. You can only transform an economy with ideas, systems, and institutions. Not just brick and mortar. “