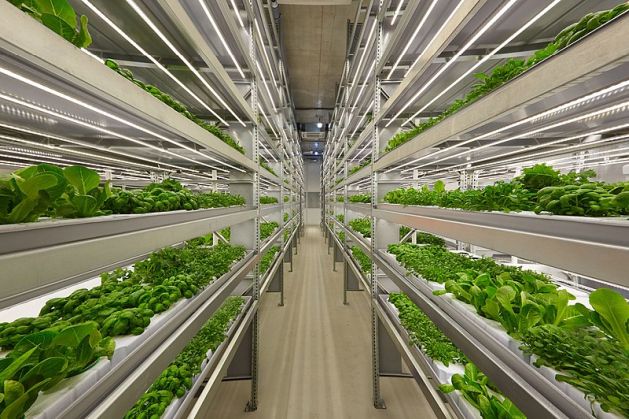 Cities across the world including New Jersey and  California, a State that is home to a multi-billion dollar agricultural industry, have continued to experience climate change-linked extreme events including scorching temperatures, extreme heat events, heavy storms, and flooding with devastating impacts on agriculture, food security,  and food systems.

Challenges in agriculture and food systems, particularly in urban areas and cities around the world, present an opportunity to re-imagine urban agriculture and increase the production and processing of food in and around urban areas.  Doing so could feed billions, but it will take investment, collaboration, research, and innovation.

Promisingly, there are several innovative approaches to growing food in urban areas around the world that are already helping. One example is vertical farming which uses abandoned buildings, warehouses, and skyscrapers to grow food. Other approaches include growing food in trendy rooftop gardens.

These urban growing food approaches that are no longer a futuristic concept have several advantages to traditional farming.  First, these approaches do not need soil. Instead, they use other growing mediums such as hydroponics and another nutrient-enhanced growth medium. Second, because production happens indoors with no definitive growing seasons, reliable production can take place all year round. Third, vertical farms use less water and have short production times.

Moreover, fresh food grown on vertical farms travels fewer miles to the grocery stores as opposed to conventional produce that must travel thousands of miles by plane or truck. Because the crops are shielded from several challenges that conventional agriculture faces including extreme weather events, and crop devouring insect pests, vertical agriculture could see increased yields and food production. Vertical farming can indeed meet food production needs in an environmentally sustainable way.

Urban city consumers have also contributed to an increase in vertical farms, as they are increasingly taking into consideration the ecological footprint of the food they are consuming.

Encouragingly, in recent years, there has been a gradual increase in the number of vertical farming enterprises, particularly in Asia and North America. In the US, there are several vertical farms including AeroFarms, Green Spirit Farms, BrightFarms, Gotham Greens, Freight Farms, Chicago, New Jersey, and Detroit.

The growth in vertical farming and urban farms and the accompanying research evidence demonstrating that urban farming can be highly productive is a good trend that should have support by governments, private industry, philanthropists, NGOs and research institutions, and universities.

To encourage continuous growth in vertical farming and growing food in urban areas, and make urban areas agricultural powerhouses, there needs to be sustained research, innovation, and funding support from diverse funding sources.

The good news is that some of the key things that need to happen to sustain the growth of vertical farming are happening.  The United States Department of Agriculture, for example, convened a stakeholder workshop that solely focused on vertical agriculture and sustainable urban ecosystems and further held small group discussions that focused on many areas that are critical to thriving vertical farms such as plant breeding, engineering, and pest management.  Additionally, USDA released a call for funding, to support research on urban agriculture.

At the same time, there has been an increase in peer-reviewed articles and research about vertical farming. This includes research addressing its economic feasibility, system designs, and optimizations, breeding plant varieties, optimizing nutrients used in vertical farming,  use of robotics technology to automate harvesting, and effective and best practices for the management of pests.

Of course, to upscale vertical farming and to ensure that all cities, and not just a few cities, have at least one vertical farm, will take much more. Among the things that are needed is the formation of task forces consisting of diverse stakeholders that will be charged with coming up with strategic plans, policies, recommendations, and assessments of what it will take to grow urban farms in cities. In the US, for example, the White House in conjunction with the USDA and all elected city mayors and public and private research universities can join efforts.

The time is ripe to re-imagine urban agriculture with vertical farming. The ongoing global food crisis, particularly in urban areas, presents a unique opportunity to grow and strengthen this revolutionary and sustainable food production approach.

Dr. Esther Ngumbi is an Assistant Professor at the University of Illinois at Urbana Champaign, and a Senior Food Security Fellow with the Aspen Institute, New Voices.