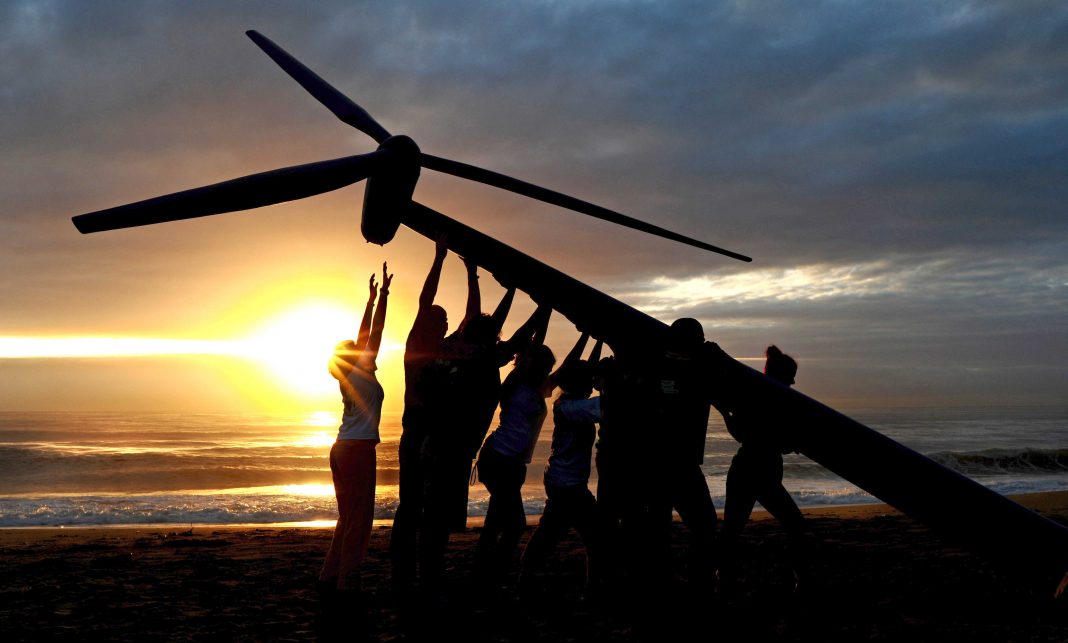 If someone were to put me on the spot and ask me to name an environmentalist group, I’d probably blurt out the first thing that comes to mind, Greenpeace. There are obvious reasons for this: Greenpeace has been around for more than 50 years, and it has done a masterful job of bringing environmental concerns to the world’s attention and keeping them there. The group has a strong track record when it comes to advocacy and awareness, and it has a global reach. It’s truly one of the most visible non-governmental organizations (NGOs) in the world.

And that’s why I see it as significant that Greenpeace’s African division has come out swinging for a major new oil pipeline slated for construction in Uganda and Tanzania. Let me explain what I mean.

The agreement serves to remove one of the final obstacles to the building of the pipeline, which will transport crude oil from fields in western Uganda, near Lake Albert, to a port on the Tanzanian coast. As such, it also clears the way for Total and CNOOC to set a concrete schedule for development of the upstream assets that will fill the line — and for investors to start pumping more than $5 billion into East Africa.

Greenpeace believes that Uganda and Tanzania ought to turn down this foreign direct investment (FDI). They explained their position by pointing out that EACOP poses environmental risks – which is hardly surprising, given their record on all seven continents. But they also argued that there were hard economic and political reasons to ditch the pipeline. Specifically, Greenpeace asserted that the building of the pipeline would have the following negative effects:

These are strong words to use, and they deserve a strong — and serious — response from Africans.

I have one: Greenpeace and Western Anti African energy groups, you’re wrong.

Oil vs. Renewables: “Both-And,” Not “Either-Or”

First, you’re wrong to predict that renewables will be crowded out if an oil pipeline is built. That’s not true.

EACOP is an export-oriented project, in that it’s designed to pump 216,000 barrels per day (bpd) of oil, or about 83% of peak output from Uganda’s Kingfisher and Tilenga fields, to the Tanzanian coast so that it can be loaded onto tankers and sold on the world market. In other words, most of Uganda’s oil won’t be going to refineries so that it can be processed into fuel for local power plants.

As a result, EACOP won’t help Uganda or Tanzania overcome their domestic energy deficits, which are considerable. These two countries will still need more electricity to support industrialization initiatives and improve citizens’ quality of life after the pipeline is built. They’ll still need power plants — and they should try to meet that need by building solar farms, wind parks, and hydroelectric dams. I happen to think they should also build natural gas-fired thermal power plants (TPPs), which boast lower emissions than facilities that burn petroleum products, but my point is: There’s nothing about building an oil pipeline that takes renewable energy off the table. (In fact, small-scale, locally-oriented renewable facilities may also have the advantage of not being subject to the deficiencies of East Africa’s transmission networks.)

So it’s wrong to describe this as an “either-or” situation, in which a binary choice must be made. It’s a “both-and” situation. Tanzania and Uganda stand to benefit from pursuing both renewables and an oil pipeline. Let’s not stand in their way by framing the matter incorrectly.

Second, you’re wrong to conclude that EACOP overlooks the interests of Ugandan and Tanzanian citizens and the communities along the pipeline route.

Yes, Total and other corporations involved stand to benefit from this project. (If they didn’t, they’d never agree to pump billions of dollars into it, and they might have a hard time convincing reputable service providers to sign contracts.) Greenpeace has never invested in any country and has never created a job. Okay they create a few jobs for drivers of the western aid workers in Africa.

But Uganda and Tanzania will benefit, too from Total’s investment. These two countries will earn revenues from oil flows through the pipeline and from oil sales. (Uganda alone may bring in as much as US$2 billion per annum over a period of at least 20 years.) Their governments will collect taxes from the local contractors that see their income rise as a result of their involvement in the project. Their businesses will profit from dealings with Total and CNOOC, which will have to hire local contractors in order to comply with local-content regulations and uphold their own contractual commitments. Their people will reap the rewards of the social welfare and infrastructure development projects these companies plan to carry out. Their societies as a whole will benefit from the construction of new infrastructure facilities such as roads, airports, hotels, and communications networks.

What’s more, ordinary Ugandans and Tanzanians will have a better chance of finding work once Total starts building the pipeline, for this project promises to create jobs — tens of thousands of them, and perhaps more than 100,000 of them overall. Samia Suluhu Hassan, the president of Tanzania, said on April 11 that she expected EACOP to create at least 10,000 jobs.

Mary Goretti Kitutu, the energy minister of Uganda, went into more detail, saying on the same day that she expected around 14,000 men and women to be hired directly by Total and CNOOC. About 57% of these people will be local workers, she added. She also stated that the upstream and midstream projects were likely to create many more jobs indirectly, with contractors to Total and CNOOC hiring around 45,000 people and businesses in other sectors taking on perhaps another 105,000 employees to handle the extra activity arising from oil operations. Facts and truth can be stubborn for those who believe foreign aid, begging and immigration to Europe should be the only way out for African youth.

Of course, these jobs won’t all last forever. Many of them will involve construction or related activities, and these will naturally come to an end once the construction projects are finished. While they exist, though, they will give tens of thousands of Africans the chance to earn larger salaries — and, potentially, gain more experience and obtain more training than they had before and start a sustainable business. As such, they have the potential to improve tens of thousands of lives in Africa — not just by increasing wages, but by creating opportunities for local workers to pick up skills they can still use after the pipeline is finished.

So it’s wrong for Greenpeace and the anti-African energy crowd to say these projects merely pay lip service to local communities. Officials in Uganda and Tanzania have worked hard to ensure that the EACOP project has a far-reaching and positive impact, and they have established new laws and policies to guard their citizens’ interests.

Take Up the NGO’s Burden: Who Are the Real Neo-Colonialists?

Finally, Greenpeace and the western anti-African energy crowd are wrong to describe EACOP as a “neo-colonial” endeavor. Come on this gives Chutzpah a new meaning.

Yes, there are foreign companies involved – Total, based in France, a former colonial power, and CNOOC, a company based in China, a rising power that stands ready to assist less-developed countries, provided that they agree to loan terms that are sometimes predatory. And yes, the largest portion of the EACOP consortium has been assigned to Total, which holds a stake of 72%. (CNOOC, meanwhile, has 8%.) But these foreign companies aren’t working alone. EACOP will also include Uganda National Oil Co. (UNOC), with 15%, and Tanzania Petroleum Development Corp. (TPDC), with 5%.

Take a close look at those numbers Greenpeace. You’ll see that both transit states have an equity stake in the pipeline — and that one of them has a larger stake than Total’s Chinese partner. Let me also point out that even if Total does have the largest stake, it is also serving as operator of the project and will assume most of the risk. As such, it stands to lose much more than UNOC, TPDC, or CNOOC if EACOP fails. That is how free markets works. You can’t love jobs and hate those who create jobs. Let’s face it, we in Africa need more free markets than communism. Free markets are still our best path to prosperity.

Tell me, how exactly is this a “neo-colonial” arrangement? Have Uganda and Tanzania really bowed under pressure from powerful external forces, or have they spent years negotiating a deal with two foreign companies that agreed to their conditions?

And speaking of pressure from powerful external forces, is Greenpeace’s approach truly free of “neo-colonial” elements? I didn’t know Greenpeace was a Pan Africanist NGO. Is the NGO using its position as one of the world’s most well-known environmental groups to ensure that local environmental advocates have a bigger bully pulpit? Is its opposition to EACOP rooted in the dreams and desires of ordinary Ugandans and Tanzanians, or is it trying to impose a solution from outside, on the basis of the global environmental movement’s pre-existing animus towards fossil fuels?

It’s wrong to use a historically and emotionally loaded word like “neo-colonialism” in this instance. It’s wrong to imply that Tanzania and Uganda have been coerced into working with foreign corporations, and it’s wrong to invoke colonialism in the hope of convincing Africans to listen to a different group of people who think they know best. Let Africans decide for themselves!

Listen, I don’t fault Greenpeace for the concerns it expresses about environmental risks.

The NGO is not wrong to point out that with pipelines, there will always be the danger of spills, leaks, and damage to surrounding ecosystems and habitats. I hope it continues to advocate fiercely for the African landscapes that Greenpeace mentions, such as the Murchison Falls National Park, which is the largest and oldest nature reserve in Uganda. That advocacy is its mission — and frankly, the business community needs to listen to critics as well as cheerleaders so that it can learn, improve, and give back to host communities. (Government officials must do the same so that they protect their constituents even as they guard revenue streams.)

But Greenpeace is wrong to argue that EACOP is not worth pursuing because it will overshadow renewable energy, because it will ignore the interests of the countries involved, or because it represents some type of neo-colonialism. Instead, it’s overstepping – and in the process of doing so, it’s wasting time that could be spent looking for ways to balance environmental protection with other crucial considerations, such as job markets, entrepreneurship, energy poverty, and budget revenues.

So let’s not waste any more time. Let’s strive towards that balance.

NJ Ayuk is Executive Chairman of the African Energy Chamber, CEO of pan-African corporate law conglomerate Centurion Law Group, and the author of several books about the oil and gas industry in Africa, including Amazon and Wall Street journal bestselling Billions at Play: The Future of African Energy and Doing Deals.