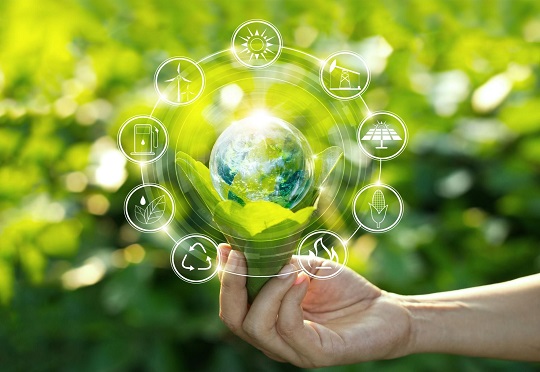 Africa is at a crossroads. As one of the most vulnerable continents to climate change and climate variability, it has a strong incentive to join global efforts to reduce greenhouse gas (GHG) emissions and bolster its adaptive capacity.

At the same time, African governments are committed to industrializing their economies in order to meet the basic needs of growing populations and create jobs and wealth.\

If the continent is to achieve both, it cannot afford to follow the same route to economic prosperity that developed nations have pursued.

Globally, countries are setting out plans to reduce their GHG emissions by the middle of the century in order to limit a rise in global average temperatures that scientists warn will bring ever-more extreme weather events and a catastrophic rise in sea levels, fueling hunger and migration.

Additionally, unchecked growth in emissions in Africa would likely lead to economic impacts, including reduced financing options and emissions-related export penalties, which could weigh on long-term growth and well-being.

Because half of the continent’s potential 2050 GHG-emitting industries have not yet been built, Africa has an opportunity to leapfrog more developed nations and build a low-carbon manufacturing sector from the ground up.

It could therefore avoid future costs by sidestepping the expensive transition from fossil fuels to renewables that the developed world is having to navigate while creating a competitive and more resilient economy that does not rely on resources that will become increasingly more costly.

Many African leaders already recognize this opportunity, as Dr. Arkebe Oqubay, Senior Minister and Special Adviser to the Prime Minister of Ethiopia, says: “Economic development that destroys the environment is no longer a viable option.

However, the transition to a green manufacturing sector will be challenging. Africa already faces difficulties in attracting investments—the African Development Bank estimates a $70 billion per annum financing gap for African infrastructure.

This financing challenge will be exacerbated by the capital needs of green manufacturing and by the fact that some high-emitting industrial assets could become stranded, causing further profitability and capital availability challenges.

In addition, the continent will need to tackle capability and talent gaps, and address the issue that newly created jobs will often be in different regions or countries than jobs that are phased out. Identifying approaches that allow for a “just transition” will be of utmost importance.

Globally, manufacturing and the power it consumes is the single largest contributor to GHG emissions and, as such, has a significant role in achieving the 1.5°C pathway. And while Africa’s contribution to these emissions is currently small, this will inevitably rise as the continent industrializes and if no steps are taken to mitigate the effects.

If Africa’s manufacturing sector follows the growth trajectory of developed markets over the past 20 to 30 years, it will likely double in size, and without any decarbonization efforts its emissions could nearly double as well to about 830 MtCO2e by 2050.

This would not only set the world back on its overall emissions reduction targets but could put the continent at an economic disadvantage. As the rest of the world seeks to pull ahead in the race to net zero, Africa’s manufacturing sector could become uncompetitive and find itself unable to export globally.

Many countries outside Africa have committed to ambitious abatement goals and are starting to pass laws and implement taxes on GHG emissions of imported goods. This could leave the continent even more dependent on international development support.

To remain competitive, our analysis shows the sector would likely need to reduce its scope 1 and 2 manufacturing emissions by about 90 percent relative to 2018 levels as part of the international effort to reach net-zero emissions by 2050 where an overall balance is achieved between emissions produced and emissions taken out of the atmosphere.

The remaining 10 percent could be compensated using additional technologies and tactics such as carbon capture and storage, and reforestation.

The bulk of Africa’s manufacturing emissions—75 percent—comes from four economies (South Africa, 37 percent; Egypt, 20 percent; Algeria, 10 percent; and Nigeria, 7 percent) driven by factors including their level of development, population size, high concentration of high-emitting sectors such as cement and refining, and share of manufacturing in GDP.

The path to net-zero emissions may not be easy, but the risks of not achieving this goal, according to our analysis, outweigh the costs and sacrifices that would have to be made to get there.

Action is more urgent now than ever, as the window to keep global warming below 1.5°C narrows. Across multiple sectors, the technology is readily available today, with additional low-carbon technologies expected to reach maturity and economic viability from 2030 to close the gap to full decarbonization by 2050. Meanwhile, investors and businesses have an opportunity to move fast and seize new green-manufacturing business opportunities.

At this critical juncture, and as Africa seeks to manage the fallout from the COVID-19 pandemic and chart a path to recovery, there is an opportunity to step back and reimagine the continent’s growth path with a more sustainable mindset.

Africa’s manufacturing story can be about innovation, about new kinds of jobs, financing, and technology that are geared towards building a more sustainable and equitable society that will be felt for generations to come.