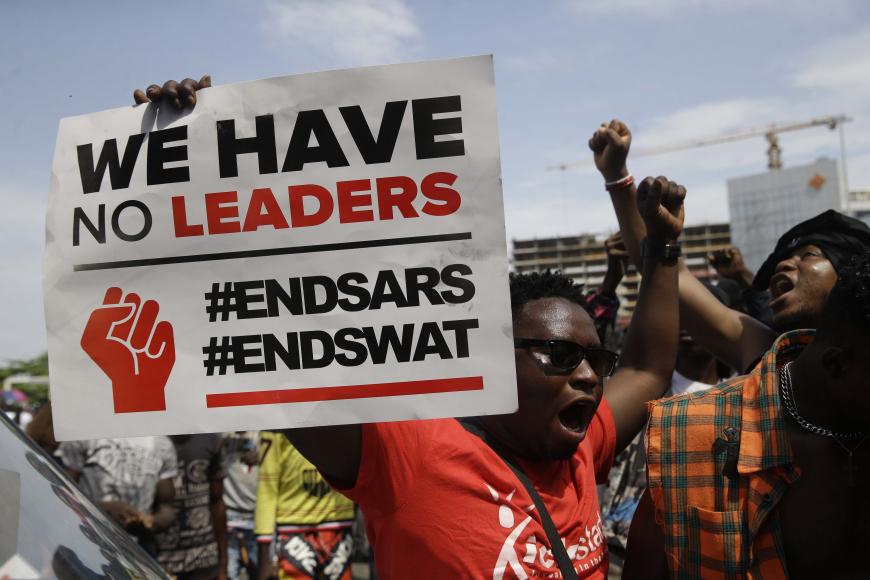 Obianuju Iloanya’s brother Chijioke has not been seen since he was detained eight years ago by a Nigerian police unit notorious for its brutality.

Over the past week, the 25-year-old political science graduate has joined thousands of other young Nigerians who have taken to the streets to protest against the Special Anti-Robbery Squad (SARS), a plainclothes divisionlong accused of gross human rights abuses, including murder, extortion and torture. A video allegedly showing one of its officers killing a man went viral this month, sparking demonstrations and a flood of online outrage.

“We are fed up,” says Iloanya. “A lot of people have been killed … not because they did anything wrong, but just because they exist as a Nigerian.”

After days of civil disobedience in cities across Africa’s biggest economy, President Muhammadu Buhari this week promised to disband SARS and to enact reforms to the police service demanded by the protesters. These include a pay rise for Nigeria’s more than 350,000 federal police officers so that they are less tempted to resort to extortion to supplement meager wages.

“The disbanding of SARS is only the first step in our commitment to extensive police reforms,” Buhari said on Monday. “We will also ensure all those responsible for misconduct or wrongful acts are brought to justice.” The protests come after a summer of renewed global focus on police brutality sparked by the Black Lives Matter movement in the wake of the killing of George Floyd by police in Minneapolis.

Nigerian protesters point out that the anti-robbery squad has been disbanded and renamed several times in recent years. On Tuesday, the inspector general of police called all SARS officers to the capital, Abuja, to undergo psychological evaluation, one of the protesters’ demands. By Wednesday, police announced that a new elite unit would replace SARS, but ex-SARS officers would not be allowed to join.

Many fear the government is simply rebranding SARS and have vowed to continue the protests — which have no single leader — until their demands are genuinely met. According to a list circulated on Twitter, these include a call for an independent body to investigate and prosecute police misconduct and “justice for all deceasedvictims of police brutality.” The government says it agreed to all five major demands, but on Wednesday, the protests continued.

“It feels like [the leader] is all of us, it’s every single person, so when someone … gets tired, there’s someone else ready to pick up the baton and get going,” explains Yele Bademosi, a 29-year-old startup founder who says SARS agents last year forced him to hand over money after marching him to an ATM. “Everyone involved is really trying to make sure it continues.”

The protests are taking placeamid an economic slump. The country is heading into its second recession in five years. Inflation is rising, oil revenues have plunged, foreign investment has all but dried up and more than 55 percent of Nigerians are underemployed or unemployed. For young people, the figures are even worse, with 34.9 percent of people ages 15 to 34 unemployed and 28.2 percent underemployed.

“Nigeria is in a spiral and things have simply been getting worse,” says Cheta Nwanze, of Lagos-based consultants SBM Intelligence. “As the frustration grows, the anger mounts — even if the current protests fizzle away, the next moment will be worse.”

The demonstrations followed an outpouring on Nigerian social media, with users posting stories and videos of alleged SARS atrocities. The squad, established in 1992 to tackle violent crime in Lagos, has since been accused of committing the very crimes it was founded to fight. In a June report, Amnesty International documented 82 alleged human rights violations by the unit in the past three years.

The Nigerian protests have garnered international attention. Global celebrities, including Kanye West and Drake, have joined in online, along with Nigerian pop stars Davidoand Burna Boy,who has set up a relief fund for protesters andvictims of police brutality.

The Redeemed Christian Church of God, one of the biggest and most influential of the many megachurches in deeply religious Nigeria, has also thrown its weight behind the protests.Members of the Lagos tech startup scene, the continent’s hottest tech ecosystem, and others have raised thousands of dollars to support protesters with food, supplies and legal aid.

Mass protests against human rights violations are rare in Nigeria and analysts say the intensity of the demonstrations reflects social change and an evolving labor market.

Those working in the country’s new and thriving startup sector and in gig economy jobs in areas such as marketing and advertising say their casual corporate culture and informal dress code have made them targets for SARS.

Agents have been accused of harassing people with dreadlocks or piercings. People carrying laptops or iPhones are commonly stopped and accused of being internet fraudsters, say protesters.

“We have a lot of young people doing these nonconventional jobs and dressing in a nonconventional fashion, so SARS is coming closer to people now,” says Moe Odele, a 28-year-old corporate lawyer who is coordinating legal aid services for protesters and has organized training for hundreds of lawyers who have volunteered to observe protests and represent those arrested.

In the past, the route to a middle-class life in Nigeria was a government job. This, combined with the country’s culture of respecting superiors, kept past generations from standing up to politicians, says Iloanya.

But now, “we realize we don’t need government jobs, so we don’t have to pander to the government,” she says.

“That’s why we can resist these guys, that’s why we’re out here. We are tired, so we decided: No more. We will not give you respect anymore; you must earn our respect,” Iloanya says.