Home Politics Tunisia – A Decade After The ‘Dignity Revolution’ 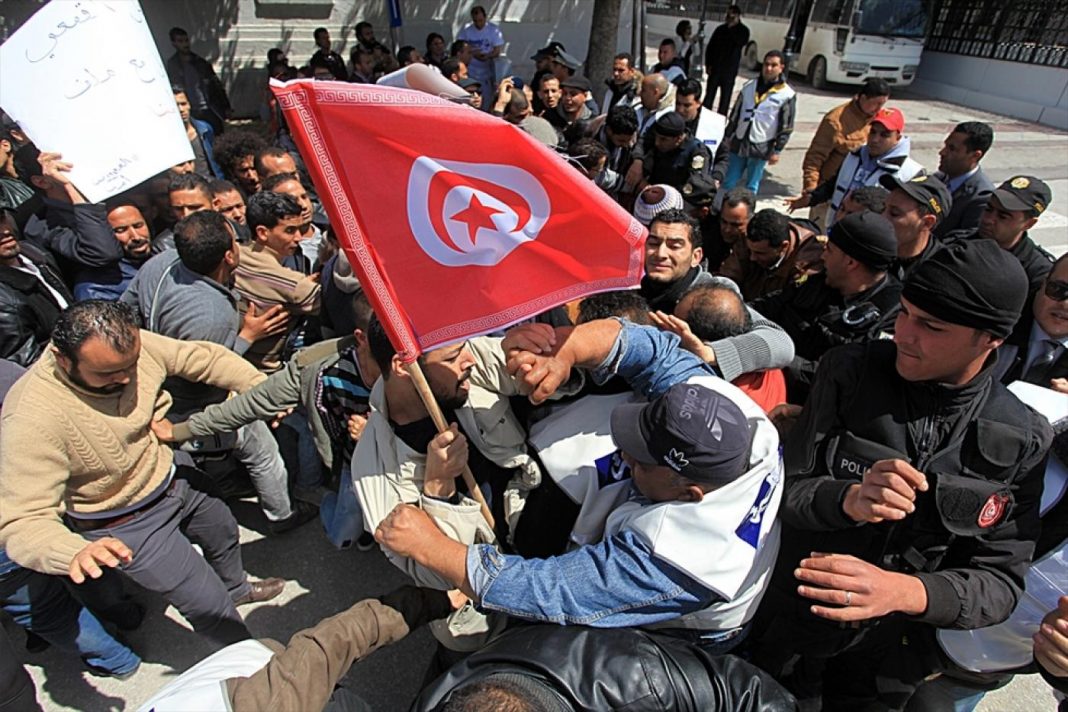 It has been 10 years since nation-wide protests in Tunisia led to the ousting of Tunisian President Zine El Abidine Ben Ali and his regime. Ben Ali led Tunisia for 23 years. Tunisia’s “Dignity Revolution” marked the first time a long-standing Arab autocrat was removed by a mass uprising.

The protests were driven by unemployment, food inflation, corruption, lack of political freedom and poor living conditions in the country.

But too little has changed. Protests continued to escalate after the imposition of a state of emergency in 2015, purportedly in response to escalating terrorism. This year, just days before the 10th anniversary of the Dignity Revolution, the government suddenly announced a lockdown and curfew. Undeterred, people still protested, and continue to do so.

Research on Tunisia’s transition of power and the country’s post-uprising trajectory show that the grievances behind recent protests are the same as those that led to the Revolution.

Then as now, people protested for their socio-economic rights and to achieve a measure of social justice, as well as to have their political voice heard. Successive governments have increased repression of civil-political rights. And corruption –- which exploits ordinary people but benefits the wealthy and influential –- remains rampant. Rather than pursuing the ‘goals of the revolution’, the government rediscovered bad old habits, ignoring, or delegitimising dissent.

Our research has also found that worsening economic conditions, and increasing inequality, aren’t consequences of the Revolution but were produced by austerity measures. These were introduced by the government at the behest of the European Union and international financial institutions.

Through our research, we’ve seen that Tunisians want a social democracy that delivers both socio-economic and civil-political rights. For Tunisians, social justice and socio-economic rights are integral parts of democracy and cannot be treated as mere outcomes.

In interviews, we’ve heard how people express frustration that the demands of 2011 were never met. And call for “another, real revolution.”

Public opinion surveys since 2011 consistently show Tunisians want a responsive government. They want it to provide decent public services and economic security, an end to corruption, democratic government, and social and political rights.

Instead – according to the Arab Barometer, a central resource for quantitative research on the Middle East – two-thirds of Tunisians think politicians are not concerned about people’s needs. Trust in politicians, political parties, or government is extremely low. And fewer than 10% are satisfied with the government overall. They are mostly dissatisfied with the government’s job-creation record, its performance in reducing inequalities, and its fight against inflation.

Signed, sealed, but not delivered

Economic grievances drove the Dignity Revolution, and have been an issue ever since. The government has failed to deliver economic growth, debt reduction, trade or employment. Unemployment remains high, the transition from school to employment is increasingly difficult and jobs have become more precarious.

In addition to this, in its most recent economic assessment, the World Bank highlighted a lack of investment, low private-sector productivity and exports below pre-revolution.

The government isn’t solely responsible for the failure to deliver on deep socio-economic reform. Our research suggests that international financial institutions and Western governments are also complicit. They have encouraged –- sometimes pushed -– Tunisia to adopt neo-liberal economic policies in exchange for aid and trade. For instance, structural reforms to public institutions and state-owned companies, reducing energy subsidies, and devaluation of the Tunisian dinar in line with the market-based exchange rate.

Whatever policymakers think they are doing, it has not worked. Nor has it dented popular dissatisfaction. The Tunisian government, the EU and international financial institutions need to rethink ‘tried and failed’ policies. They must adopt measures that meet people’s demands for dignity, employment, and an end to corruption.

The government could, for example, invest in infrastructure -– especially in the interior –- to create employment and attract both foreign and local investment. A progressive tax structure would redistribute wealth, increase internal demand, and send people a symbolically important signal. As would protection for the unemployed and a concerted fight against corruption.

For its part, the European Union could allow Tunisia greater access to its agricultural internal market, where Tunisian produce has a competitive advantage. They could also mitigate loan repayment conditions or indeed press for reforms making work more –- not less –- rewarding and secure.

This is explains why the transition is viewed as a failure. And why, just as they did 10 years ago Tunisians are calling for “isqaat an-nizaam”: the end not just of a particular autocrat’s rule but of an entire system.

Saerom Han is an Honorary Research Fellow, University of Aberdeen