Home Politics The return Of Russia To Africa 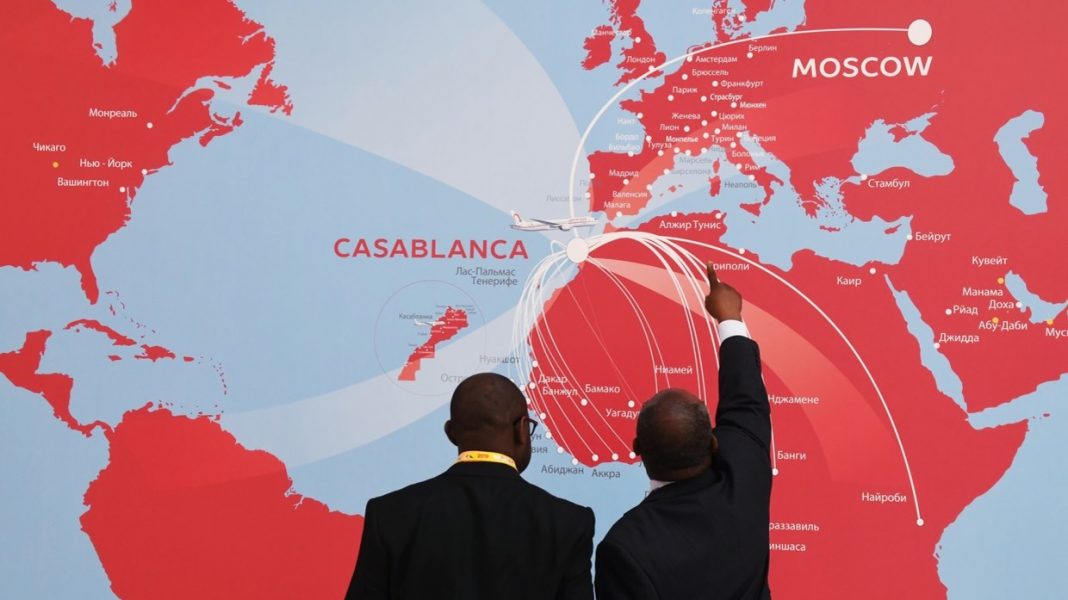 As Moscow attempts to re-establish old Soviet ties and buy influence in the continent, it is presenting itself as the alternative to old self-interested colonial powers.

Russia’s role and profile in Africa, and the factors underlying its activities are rarely discussed in detail.

Some of the reasons for Russia’s interest in the continent include the threat of its diplomatic isolation from Europe and the US over Moscow’s policies in Syria and prior to this the situation in Ukraine, leaving the Kremlin with no alternative but to seek new allies. As competition for resources, political influence and access to markets continue to increase, Russia began to look outside established power centres.

Africa has historically been a prominent field of influence for the United States and then the Soviet Union (USSR). Since the collapse of the USSR in 1991, Russia has been trying to establish its place by setting formative policies to reassert itself on the world stage as a major international power. Bilateral relations between the USSR and African nations were frozen at the end of the Soviet period.

However Russian President Vladimir Putin seems to have new aspirations in Africa to restore his country to strong power status, spurred on by concerns that China, India, Brazil, and especially the United States are intensifying their involvement in Africa.

The past relations and partnerships between African countries and Russia put an emphasis on political ideology, but now, this has shifted. Today, Moscow wants to deepen its understanding of the business climate and explore trade and partnership opportunities in the African continent.

State Duma Speaker Vyacheslav Volodinnotedthat the business component is growing in the development of relations between the Russian Federation and African countries. While, Russia’s Foreign Minister SergeyLavrovundertook a week-long tour of Africa, visiting Angola, Mozambique, Namibia, Ethiopia, and Zimbabwe.

An increasing number of bilateral events have recently been planned, in which foreign relations will culminate in the first Russia-Africa summit of more than 50 African leaders hosted by Russia in October 2019 in Sochi. Russia is returning to Africa and using all of its instruments of power, including diplomacy, energy investments, and military support to accumulate influence.

Putin views geopolitical relations as insurance for Russia’s stability and the pursuit of the country’s assertive stance globally.

Shortage of minerals such as manganese, chrome, mercury, bauxite and chromium in Russia’s industry markets mean that Russia is willing to develop its commercial-economic relations with the continent.

This is being done through Russian firms which operate on the continent utilising a pragmatic framework of economic cooperation, as opposed to historical investment in the African continent, motivated purely by Europe’s greed for natural resources and even China’s more recent investments, which have been criticised as being exploitative.

This increase in economic cooperation is the main determining factor especially in the fields of mining, transportation, infrastructure, construction, industry, agriculture and tourism, a sharp contrast to an approach of neo-colonialism.

Putin’s visit to the Republic ofSouth Africa in 2006was the first ever visit by a Russian leader to sub-Saharan Africa, intensifying Moscow’s desire to foster investment and involvement in the region through political initiatives, business delegations, and securing access to natural resources.

Ethiopia and Russia alsoseekto enhance engagement in the development of a nuclear energy facility in Ethiopia and resume daily flights from Addis Ababa to Moscow as part of speeding up the growing ties between the two countries. From a mining aspect, Russia is also cooperating with Zimbabwe, where it is developing one of the world’s largest reserves of platinum group metals.

Moreover, Russia’s focus in Africa is centred on energy, holding key investments in the oil, gas and nuclear power sector. State-run Russian companies such as Gazprom, Lukoil, Renova, the aluminium company Rusal and the state diamond mining company Alrosa, operate in several areas and domains on the continent by securing their power in industrial African markets.

In the first half of 2018, the trade turnover amounted to approximately$10.5 billion, and the accumulated Russian investment in Africa from 2003 to 2017 amounted to$17 billion.

Furthermore, an essential component of Russia-Africa relations is the domain of the military-technical sector.

Russia often uses development and military assistance to encourage African leaders to grant Russian companies easy access to their energy and mining sectors. Arms sales relations established in the Soviet Union years have always been a priority in order to purchase military equipment and weapons.

Angola and Mozambique are actively cooperating with Russia in this field. Lavrov announced plans to establish a‘logistics centre’at a port in Eritrea. Further to this, Russia donated its own weapons to theCentral African Republic(CAR) when they pleaded for help in fighting marauding militias, countering France’s offers of old guns it had seized off Somalia.

Russian political aspirations in Africa include re-gaining the leverage once enjoyed by the Soviet Union by re-establishing a presence as a non-colonial power, which has been made prominent in media reporting and in official Kremlin statements on African relations.

The question for African foreign policymakers now is how to play it cleverly from a position of relative strength and leverage. With keen interest from not only China, US, Japan, and now Russia, the countries have the potential to take advantage and use the new ties to make the economic gains they so desperately need.

However, increasing economic influence by many foreign players in Africa can lead to potential clashes and escalating competition between Russia, China and Western countries.

For now, Russia wants to support Africa to take it away from US and EU influence and use it as the pivot of Russia’s future development as a global, economic and strategic power. However, its main goal is to decide what unique offer it can make, that hasn’t already been made by Chinese investment or Western ‘aid’.

Aruuke Uran Kyzy works at TRT World Research Centre. She has a degree in International Relations, English and Literature from Istanbul University. Her current area of focus is Russian and Central Asian studies.