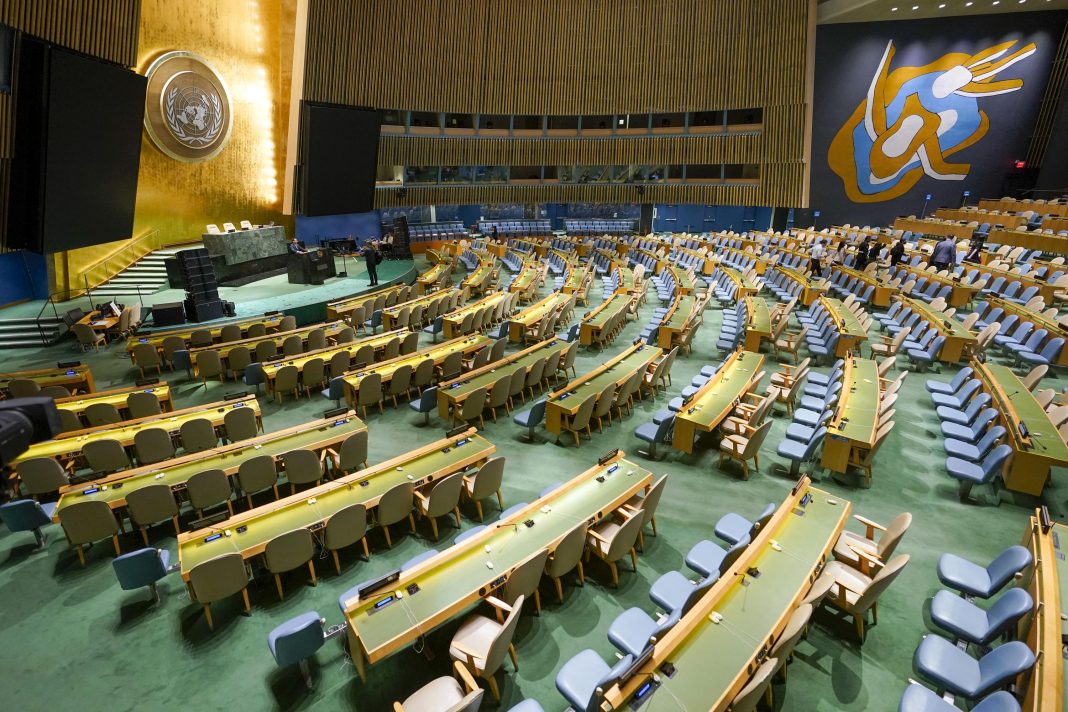 UNITED NATIONS, Sep 19, 2022 (IPS) – When the United Nations decided to locate its 39-storeyed Secretariat in New York City, the United States, as the host nation, signed a “headquarters agreement” in 1947 not only ensuring diplomatic immunity to foreign diplomats but also pledging to facilitate the day-to-day activities of member states without any hindrance, including the issuance of US visas to enter the country.

But there were several instances of open violation of this agreement by successive US administrations.

Stephen Zunes, Professor of Politics and International Studies at the University of San Francisco, who has written extensively on the politics of the United Nations, told IPS the U.S. broke its commitment to the UN by refusing to allow Yasser Arafat, leader of Palestine Liberation Organization (PLO), to come to New York to speak, forcing the entire General Assembly to convene in Geneva back in 1988.

“And there is the periodic US media obsession with visits by foreign leaders Americans love to hate, such as (Iranian President) Ahmadinejad (while ignoring more moderate Iranian leaders before and since speaking of peace and reconciliation),” said Zunes.

And, of course, there are the bizarre and misleading addresses by various U.S. presidents over the years, he added

The move to Geneva was a first in UN history– but it provided a less-hostile political environment for the PLO leader— as the General Assembly, the UN’s highest policy-making body, stood defiant and delivered a resounding slap to the US, momentarily abandoning its New York City home.

Palestine is one of two permanent, non-member observer states, the other being the Holy See (Vatican).

Arafat, who first addressed the UN in 1974, took a swipe at Washington when he prefaced his statement by saying “it never occurred to me that my second meeting with this honorable Assembly, would take place in the hospitable city of Geneva”.

Meanwhile, there were reports last week that visas for Russian diplomats, including Foreign Minister Sergey Lavrov, were either denied or delayed in the run-up to the high-level meeting of the General Assembly on September 20-26.

Asked about the complaints by the Russians, UN Spokesperson Stephane Dujarric told reporters last week: “This is an issue that we have repeatedly brought up with the Host Country”.

“This is an issue that was raised to us by the Russian Federation. I think the Secretary-General feels very much that visas should be delivered to the Russian delegation and to delegations who have a business to be done at the United Nations, especially during the General Assembly.”

Asked at what level this was being discussed, he said: “It’s one that we have been repeatedly raising because, as you say, it’s been going on for quite some time. The Legal Counsel is the point person on this”.

“It’s done through our legal office because they support the Host Country committee, but I know this is an issue the Secretary-General, I think, has raised in a number of phone conversations with senior US officials, as well, and one that has been raised with him by Russian Foreign Minister Lavrov, as well as the Russian Permanent Representative Nebenzia.”

During his first visit in 1974, the PLO leader avoided hundreds of pro and anti-Arafat demonstrators outside the UN building by arriving in a helicopter that landed on the North Lawn of the UN campus adjoining the East River.

Arafat was escorted by security men into the UN building and to the Secretary-General’s 38th floor where he spent the night in a makeshift bedroom.

But that bedroom had not been used for years, and the color of water was brown when the bathroom’s faucet was opened. Mercifully, it was not an attempt by Israeli intelligence to poison the PLO leader.

There was also a legendary story of how Arafat, who was on an Israeli hit-list, never slept on the same bed on two consecutive nights – in order to outwit assassins trying to kill him in Israeli-occupied Palestinian territory.

But whatever the reason, Arafat spent only a single night in the UN building.

Since Arafat, several political leaders—mostly antagonistic towards the US or heading regimes under American sanctions– have either been denied visas or implicitly declared persona non grata (PNG).

As a result, heads of state from “rogue nations,” including North Korea’s Kim Il Sung, Iraq’s Saddam Hussein, and Syria’s Hafez al Assad, never addressed the UN – and perhaps never tried for a US visa either, which may have been refused.

When former Sudanese President Omar Hassan al-Bashir, accused of war crimes, was refused a US visa to attend the high-level segment of the General Assembly sessions in September 2013, Hassan Ali, a senior Sudanese diplomat, registered a strong protest with the UN’s Legal Committee.

“The democratically-elected president of Sudan had been deprived of the opportunity to participate in the General Assembly because the host country, the United States, had denied him a visa, in violation of the U.N.-U.S. Headquarters Agreement.”

“It was a great and deliberate violation of the Headquarters Agreement,” he said.

The refusal of a visa to the Sudanese president was also a political landmine because al-Bashir had been indicted for war crimes by the International Criminal Court (ICC).

But the question that remained answered was: Does the United States have a right to implicitly act on an ICC ruling when Washington is not a party to the Rome Statute that created the ICC?

Meanwhile, some of the military or autocratic leaders who addressed the UN in a bygone era included Fidel Castro of Cuba, Col Muammar el-Qaddafi of Libya, Amadou Toure of Mali (who assumed power following a coup in 1991 but later served as a democratically elected President), and Jerry Rawlings of Ghana (who seized power in 1979, executed former political leaders but later served as a civilian president voted into power in democratic elections).

Libyan leader Qaddafi, made a dramatic appearance at the UN in September 2009.

In its report, the London Guardian said he “grabbed his 15 minutes of fame at the UN building in New York and ran with it. He ran with it so hard he stretched it to an hour and 40 minutes, six times longer than his allotted slot, to the dismay of UN organizers”.

Qaddafi lived up to his reputation for eccentricity, bloody-mindedness, and extreme verbiage, said the Guardian, as he tore up a copy of the UN charter in front of startled delegates, accused the Security Council of being an al-Qaida-like terrorist body, called for George Bush and Tony Blair to be put on trial for the Iraq war, demanded $7.7 trillion in compensation for the ravages of colonialism on Africa, and wondered whether swine flu was a biological weapon created in a military laboratory.

Incidentally, according to one news report, there were 112 different spellings of the Libyan leader’s name, both in English and Arabic, including Muammar el-Qaddafi, Muammar Gaddafi, Muammar al-Gadhafi, Muammar El Kadhafi, Moammar el Kazzafi, Moamer, El Qathafi, Mu’Ammar, Gadafi, and Moamar Gaddafi, amongst others.

The Wall Street Journal ran a cartoon making fun of the multiple spellings, with a visiting reporter, on a one-on-one interview in Tripoli, told the Libyan leader: ”My editor sent me to find out whether you are Qaddafi, Khaddafi, Gadafi, Qathafi or Kadhafi?”

This article contains excerpts from a book on the UN—a motley collection of hilarious anecdotes– titled “No Comment – and Don’t Quote Me on That,” available on Amazon. The link to Amazon via the author’s website follows: https://www.rodericgrigson.com/no-comment-by-thalif-deen/