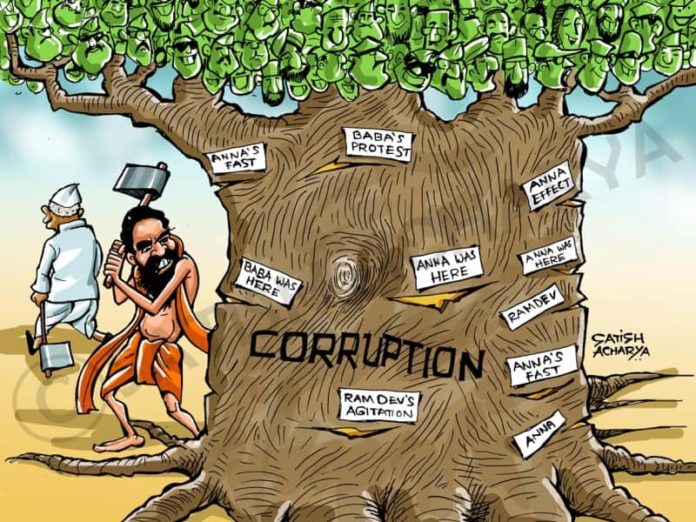 Since political independence of Nigeria in 1960, there has been several efforts aimed at bringing about reforms that could facilitate state-building for development. Such efforts aimed at improving the institutions and well-being of the citizens seem to have been confronted by several challenges which endemic corruption ranks topmost. Evidently, the return to democratic rule in 1999, Nigeria seem to have been confronted with seemingly overwhelming incidences of corruption related cases.

This seems to have defied the objective of establishing two major anti-graft agencies: Independent Corrupt Practices and Other Related Offences Commission (ICPC); and the Economic and Financial Crimes Commission (EFCC) to curb corruption in the country. Incidentally, corruption in Nigeria appears to have become endemic assuming the posture of a permanent feature of the Nigerian polity and almost institutionalized into the realm of culture and value system of the country. Apart from greed, the causes of corruption in Nigeria are not divorced from the lack of capacities of the institutions and structures of government to provide the basic necessities of life.

Despite President Muhammadu Buhari’s anti-corruption posture upon return to power in 2015, sleaze and bribery have since developed their own sophistication of protective forces, having recruited disciples from various segments of the Nigerian society.

Nigeria is not only Africa’s giant in population. It also leads the continent in stolen assets lodged mainly by security chiefs and top public officials in the United Arab Emirate (UAE), Britain, among other countries and islands serving as unbreakable vaults for stolen wealth.

The recent disclosure by the Human and Environmental Development Agenda (HEDA) that out of a total of 800 assets, no fewer than 13 top Nigeria’s top security officials own 216 in UAE, while the remaining 584 assets are owned by public officials reflects how corruption has assumed a pervasive level.

Nigeria’s democracy may have provided freedom to citizens, but it has equally enthroned a terrifying culture of robbery by public officials. Materialism has now possessed the souls of politically exposed persons, with top bureaucrats that should resist corruption leading the way.

The monster of corruption has always been with us even before independence. The fierce battle for the control of the center by leaders of former regions was another form of corruption that would later unleash financial corruption for personal aggrandizement.

Viewing corruption from the angle of illicit financial dealing is flawed and has the capacity of diminishing its devastating impacts on society. What must be understood here is that actions and inactions of governments and highly-placed public officers have promoted corruption and given wings to fraudulent persons to soar without questionings.

As it is now, those who are proprietors of corrupt transactions now have the upper hand as they possess the capacity to influence affairs in various sectors of national life. That explains why the corrupt often get ahead, while those relying on due process most times fall by the wayside.

Corruption is largely perpetrated by those in the corridor of power and other influential platforms. Presently, even before jobs are advertised for prospective applicants, the slots have already been shared among top members of the political class and technocrats. It is common knowledge that juicy agencies and parastatals of government are reserved for children of first class monarchs, retired and serving generals and presidency officials.

Like the chairman of HEDA, Mr. Olanrewaju Suraju, rightly pointed out, illicit financial outflows have continued to hurt Nigeria’s vulnerable poor and threaten unpredictability on the country as mass unemployment continues to fuel violence and lure energetic young minds battling to survive the harrowing experiences of living in Nigeria.

From the report released by HEDA, curbing increasing illicit financial deals, no doubt, is assuming a herculean task, as mainly politically exposed persons insist in continuing their warm relationship with top technocrats that have found willing collaborators with owners of the nation’s financial institutions.

Without the cooperation of Nigeria’s financial establishments, it will be practically impossible for public officials to succeed in perpetrating such unimaginable heists that have continued to cripple our economy and turn our national dream for development into a mirage.

Corruption in the public sector fuels corruption in the private sector. A dishonest public servant has the capacity of not only destroying trust, but also luring co-conspirators from the private sector to unleash heavy damage on various national sectors. In 1986, the Chairman of the defunct Champion newspapers, Chief Emmanuel Nwuanyawu predicted that without reforming the nation’s public service for transparency, the war against corruption would amount to only pouring water in a basket. Nearly four decades after saying this, efforts intended at combating corruption have remained futile.

For a nation that has continued to express its determination in clearing fraud out of its system, HEDA’s frightful revelation clearly reveals how cleaning the Augean stable may prove almost an impossibility. Some of the people promoting corruption are the same public officials mandated with the task of exterminating corruption.

In a situation of prevailing weak institutions, tackling the activities of fraudsters can turn out a mountain too high to climb. When a nation rewards dishonest men and scorns honest workers, what awaits such a nation is nothing less than doom and eventual annihilation.

Nigeria is presently witnessing clouds of uncertainties hovering over its skies. The exploits of corrupt men and women have exposed the underbellies of the country’s hypocrisy as lovers of corruption. In total submission to the indispensability of corruption, citizens are no longer astonished at the massive level of looting. Their sense of outrage has been weakened by the hope that someday, between now and the future, the time to steal from the common patrimony may come.

On the strength of the hope that everyone’s day will inevitably come, Nigerians seem to have given up on the fight against corruption. It is a white lie that the government and their officials are interested in catching thieves as many Nigerians see leadership as an opportunity to steal. If the words of political leaders support claims of truly waging a war against fraud, their actions prove the contrary.

Fighting corruption is not rocket science. Deployment of technology has always been used to fight corruption in many countries. In the 21st century, billions of Naira are still being lost on a monthly basis to the ghost worker syndrome. N10 billion is presently paid monthly to the workforce of Nigeria’s collapsed refineries that have not produced a litre of fuel over the past five years or more.

The worst malaise foisted on Nigerians is the perception that nothing works without resorting to some crooked ways. Parents are now engaged in bribing their ways to secure admissions for their children and wards in public universities and other tertiary schools. Nigeria’s education is now in the pots, just as everyone is out for himself, but no one for the country.

Teachers have now embraced financial inducements even when their rewards are still in heaven. Banks and telecommunication companies now fleece customers, using all manners of deductions. The Police Force, despite increment of their salaries, are still hungry for meagre bribes from erring commercial transporters.

For those who think the stolen assets in UAE are shocking, Europe is undoubtedly still the storehouse of Nigerians’ stolen wealth. Western nations know this and they are not in any way convinced of assisting Nigeria have these wealth returned to us. The economic strength of their economies depends on Nigeria’s stolen assets and that of poor African countries that have been cursed by an incompetent leadership.

Make no mistake. Nigeria will continue to experience the shattering trails of these pen robbers until strong institutions and systems are built to rein in the activities of these corrupt officials. It is not enough to establish the Economic and Financial Crimes Commission (EFCC) and other anti-graft agencies. Bad elements that are willing to collaborate with fraudsters must be shown the way out.

Apart from strengthening the regulatory framework of the various anti-graft bodies, leaders must learn to do what they say and not do what they don’t say. What Nigeria needs is a ruthless leadership that is committed to fighting corruption in all ramifications.

Musa Simon Reef is a Nigerian journalist based in Lagos .