Home Politics Nigeria: How To Rethink Responses To Women Displaced By Boko Haram 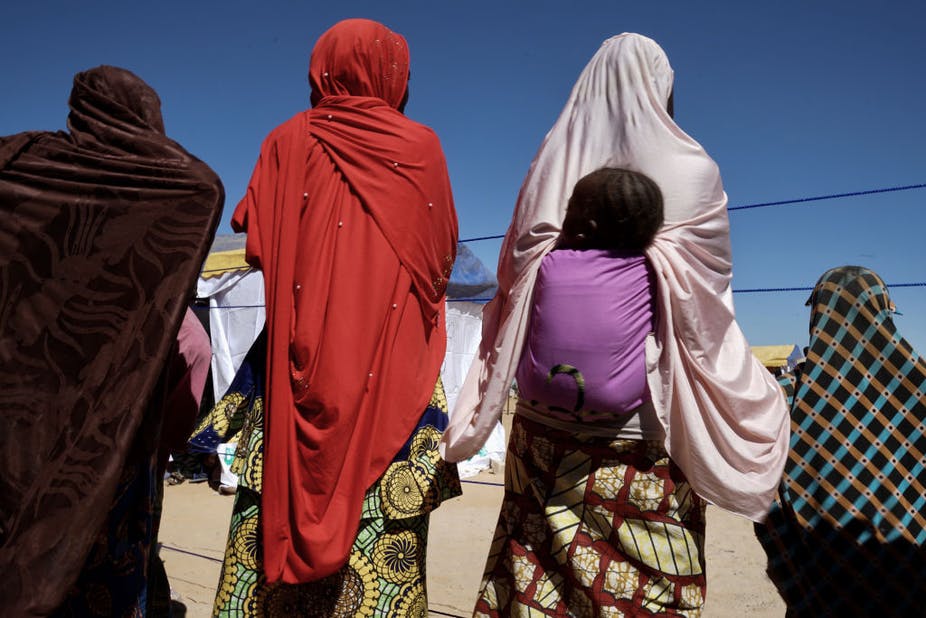 People’s experiences of conflict and violence are shaped in part by sex and gender. Women and girls are especially vulnerable to the threat of sexual violence, owing to cultural practices of gender inequality. Gender norms also have an impact on the roles that both sexes play in conflict contexts.

In Nigeria, women and girls make up at least 79% of approximately 2.5 million people displaced across the country’s northeast as a result of the 11-year conflict between the armed group Boko Haram and the Nigerian government. This population is dispersed in camps and host communities in six states in the region and in Cameroon, Chad and Niger.

Inaccurate data and other logistical challenges mean that these figures are probably even higher. This situation has numerous protection and humanitarian implications for women.

Yet women’s experiences of this displacement have received scant scholarly attention.

I conducted a study to look more closely at the assumptions underlying much of the scholarship on women and displacement. I argue that women’s experiences of conflict and displacement derive foremost from their unequal status in Nigerian society, where violence against women has been seen as normal. And yet, in spite of their low socio-cultural status, displaced women are using their agency. Through peacebuilding and political mobilisation and engagement, they are compensating for the shortfalls in policy and humanitarian responses. They are not necessarily helpless victims. Some have even chosen to return to Boko Haram, though ‘choice’ is paradoxical given their circumstances. Evidence suggests that thinking about displaced women in new ways can change their experience of displacement for the better.

My study highlights the need for policy and humanitarian interventions to take more notice of women’s specific and multi-sectional experiences and priorities.

I interviewed 71 people in Abuja and Maiduguri in 2018. Some were women who had been displaced inside the country. Others were human rights and humanitarian personnel, female members of the civilian joint task force, police, activists, politicians, security experts and journalists.

In their own words, safety and security are of prime concern for women and girls. Both before and during displacement, they routinely face sexual and gender-based violence from Boko Haram, as well as camp officials and security actors. The Nigerian government has repeatedly denied such misconduct by its forces. So far, there is only one documented case of disciplinary action against an air force officer who raped a 14-year-old girl in September 2018 — he was dismissed.

In camps for displaced people, women face mental and sexual health challenges in a context of limited access to quality healthcare and justice. Inconsistent humanitarian support has led to a cycle of food and nutrition insecurity, economic deprivation and dependence.

The euphemism “transactional sex” barely disguises the desperation that drives women and girls to exchange their bodies for food and survival, nor the exploitation and abuse of power that it entails.

The protracted and ongoing violence means that the displacement crisis will not likely end soon. And those worst affected by it will continue to suffer inhumane living conditions.

Policy and practical responses to the displacement crisis, from the national to the international, have not been very gender-responsive. To cite one example, a Tripartite Agreement for the Voluntary Repatriation of Nigerian refugees signed in March 2017 between the governments of Nigeria and Cameroon and the United Nations High Commissioner for Refugees makes no provisions for the special needs of women and girl refugees.

Skills training, monetary handouts and other interventions aimed at empowering women are not taking their context into consideration. There is a mismatch between some women’s new found “power” as heads of households and a patriarchal context that sees them as subordinate. Also, women have had experiences as direct and indirect agents of violence – including as spies, smugglers and suicide bombers.

Failure to recognise women’s diverse experiences leads to misaligned responses that either do not transform their circumstances or catapult them back into the situations they were rescued from.

Until the conflict ends, a rethinking of approaches to current interventions could create opportunities for empowering women.

First, it must be recognised that context matters. Nigerian women’s experiences of conflict are a mirror of their unequal status and the normalisation of gender violence. Effective empowerment cannot happen without addressing gender inequality norms. And some approaches to empowerment create more problems than they solve. For example, giving women money can fuel domestic violence because it makes some men feel disempowered.

Second, women have agency in situations of conflict and violence and they do not always use it for peace. Some have demonstrated this by returning to Boko Haram as a way of coping with the difficulties of displacement.

Consultation with women displaced by Boko Haram is critical to understanding their needs and how best to achieve them.

Titilope F Ajayi is a Researcher at the University of Ghana