Home Politics Nigeria: A Year On, No Justice For #EndSARS Crackdown 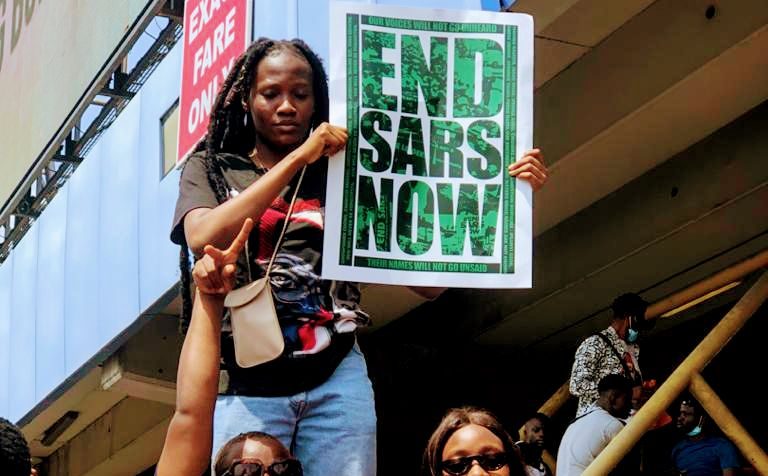 The victims are still awaiting justice a year after security forces violently suppressed protests calling for an end to police brutality in Nigeria, Human Rights Watch said today. The prospects for accountability remain inconclusive and bleak. Nigerian authorities should take concrete and decisive steps to ensure that those implicated in abuses against protesters are held accountable.

In October 2020, young people across Nigeria took to the streets calling for disbanding an abusive police unit known as the Special Anti-Robbery Squad (SARS) and for ending brutality in a movement tagged #EndSARS. Security forces responded with excessive force, including gunfire, which resulted in death and serious injuries.

“Nigerian authorities should clearly demonstrate that they are serious about holding those responsible for abuses against protesters to account,” said Anietie Ewang, Nigeria researcher at Human Rights Watch. “Failure to pursue justice will strengthen the culture of impunity and reinforce the perceptions that brought protesters to the streets in the first place.”

Between October 2020 and August 2021, Human Rights Watch interviewed 54 people, including victims and their family members, protesters, protest supporters, representatives of civil society groups, medical service providers, political analysts, and journalists, on how the crackdowns unfolded and how the victims have been affected. Human Rights Watch also wrote letters to the Nigerian Police Force and the Nigerian Army to share findings and ask questions about officers’ conduct during the protests but has yet to receive a response.

One of the worst crackdowns was at the Lekki Toll Gate in Lagos on October 20, when army officers arrived in about five trucks and surrounded a large group of protesters holding a peaceful sit-in. The soldiers trapped the protesters, using a tactic known as “kettling,” then fired in the air and at the crowd. Kettling is a method of confinement used by police to trap a crowd of people in a specific space.

After the soldiers left, police officers arrived and, according to multiple witnesses, began shooting at protesters who had not managed to flee. Witnesses described a gruesome scene with bloodied, lifeless bodies on the ground and many others with gunshot wounds whom they tried to rush to hospitals.

Human Rights Watch was not able to ascertain the total number of those killed by the military during this incident. Witnesses said that they saw what appeared to be at least 15 lifeless bodies and that military officers had taken away at least 11. Witnesses also reported that the police shot at least two protesters and took their lifeless bodies away with them.

People who survived the use of excessive force at Lekki and other locations had tales of woe about the aftermath. Human Rights Watch confirmed that a 32-year-old generator mechanic died on the way to the hospital after the military shot him in the chest and stomach. Another protester, Wisdom Okon, remains missing. Their loved ones said that efforts to report what happened to the police or gather information from the authorities have been futile.

The brother of the man who died said:

“We feel bad but there is nothing we can do because we can’t fight the government. We tried to make a report at the police station after he died but they [the police] didn’t allow anybody near their stations, not even close to the gate, talk less of [reaching] the counter [inside the station] to make a report.”

Peace Okon, the sister of the missing man, said that she has been looking for her 18-year-old brother since October 20, 2020, when he was last seen by their neighbor at the Lekki Toll Gate protest site around 4 p.m. She suspects he may have been shot or injured at the toll gate and has since visited several hospitals, mortuaries, police stations, and a prison in Lagos to try to find him, to no avail.

She said officers at the police stations and the prison she visited wanted bribes before helping her. She said:

“I can’t report to anybody that I know will do the right thing. My mom has developed high blood pressure, she calls me weeping, asking for her son… I am helpless and I feel responsible because I brought him to Lagos [from our village]. This our country is not fair, there is no justice for the ordinary man, the government has forgotten about those people who were killed or missing from Lekki Toll Gate.”

Human Rights Watch interviewed and inspected the wounds of four people who said they had gunshot wounds and interviewed a doctor who confirmed that three people brought to the hospital where he works had limbs amputated after being shot at Lekki.

A 30-year-old events planner shot in his upper thigh said: “I am still alive, but we lost others in the struggle just because youths decided to speak up. If nothing is done to those that shot us, then it really means that our lives are nothing in this country.”

Despite repeated calls for accountability for abuses committed against protesters, Human Rights Watch has not been able to determine that any members of the security forces or police have been arrested or tried for their roles in the crackdown.

The Lagos State Judicial Panel of Inquiry and Restitution for Victims of SARS Related Abuses was set up on October 19, 2020, alongside other state panels to receive and evaluate public complaints of police brutality and extrajudicial killings and to recommend compensation for victims and officers for prosecution. The mandate of the panel was later extended to include investigations into the Lekki tollgate incident.

The panel is expected to conclude its work on October 19, but it has no authority to make binding decisions and can only present its findings and make recommendations to the Lagos State governor. If the recommendations are adopted, they can be enforced as a judgment of the State High Court.

However, a Nigerian lawyer and security sector reform expert told Human Rights Watch that courts cannot automatically assume jurisdiction over police or military officers. Charges can only be brought against them after internal disciplinary processes lead to their being fired.

Despite the slow progress, justice could still be achieved, but the full cooperation and support of the federal government, the Lagos State government, and the Nigerian military and police force will be critical. Officers who have been summoned by the panel should testify and answer necessary questions, and the Lagos State government should also commit to releasing the full report of the panel’s findings and recommendations. The federal government should then ensure that those implicated in abuses against protesters, including as a matter of command responsibility, are brought to justice.

Beyond accountability for abuses during the #EndSARS protests, the authorities should tackle the systemic problems that foster a culture of impunity in the security sector and push forward comprehensive and meaningful reforms to end the abuses and injustices Nigerians have long experienced.

“Nigeria’s authorities should take effective steps toward accountability to show victims that their loss, pain, and suffering is not in vain,” Ewang said. “Anything less will worsen distrust of the government and reinforce the perception that the lives of citizens do not matter.”