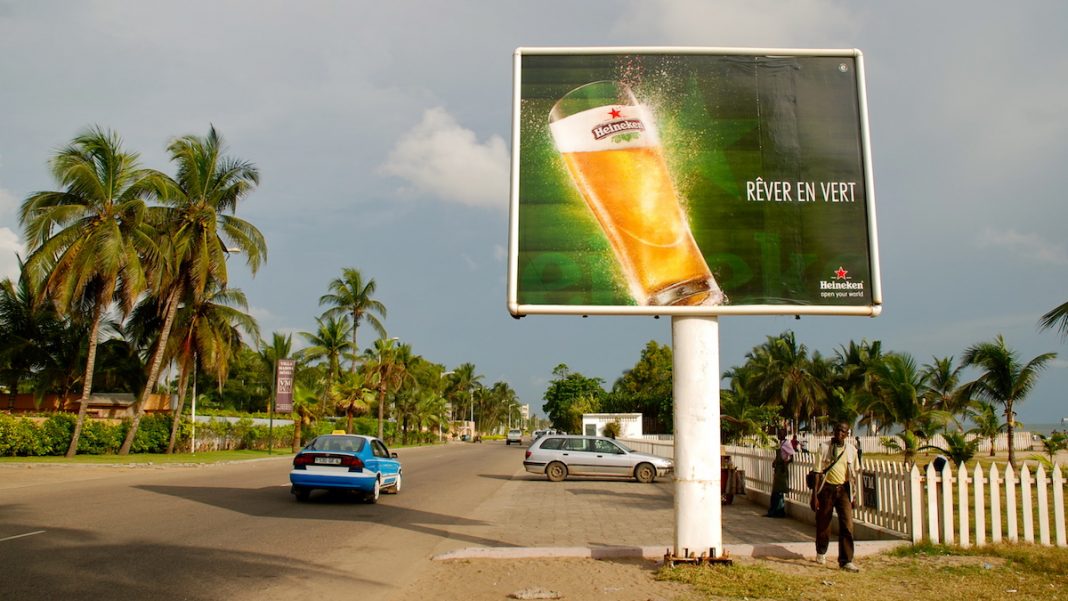 Multinational corporations are considered motors for development in Africa and the Dutch beer giant Heineken is often cited as one of the best examples. The reality is different and distressing.

In the Netherlands, there’s an old secret that involves a local, world-famous beer brand. Only we Dutch know that Heineken is actually an average beer: nothing wrong with it, but nothing special either. It’s somewhat similar to eating a hamburger at McDonald’s: the taste is unlikely to upset most people and you can even experience a burning desire to eat one, but you know it’s not great and might regret it afterwards.

However, thanks to decades of successful marketing campaigns, people across the globe believe that Heineken is a so-called premium beer, for which many are prepared to pay a premium price. People consider Heineken a drink for winners who compete in European Champions League soccer and Formula One auto races, just two of the major sports events the corporation is sponsoring. These days, even secret agent James Bond alternates between his classic vodka martini and the green bottle from Amsterdam. An iconic former CEO of the brewing company, Freddy Heineken, used to say: “People don’t drink beer. They drink marketing.”

In Heineken’s global beer empire, Africa holds a special place. The company doesn’t only expect substantial future growth from the continent’s emerging economies, it already makes mouth-watering profits here. According to the latest available results, Africa is 42 percent more profitable than the worldwide average for Heineken. Nigeria is one of the three most important global markets for the company, ahead of big western markets, such as the United States, the United Kingdom, or France.

Like elsewhere, marketing is of great importance and to the delight of the industry there are few limits for advertising in many African countries. In Kinshasa, the capital of the Democratic Republic of the Congo, Heineken has painted whole neighborhoods in the color of a popular local brand, including beer logos on a police station, pharmacies, and school buses. In several countries, the brewing company has put logos on the walls of primary schools it has renovated. And in Lagos, Nigeria, Heineken has organized several beer and health conferences, where the audience was told that drinking beer would increase their life expectancy, prevent diseases, and make them more beautiful. People were recommended to drink 1.5 liters (51 fl oz) of beer each day to benefit from all the supposed advantages.

Across the continent, Heineken hires thousands of young women to promote its beer at bars and clubs. They used to be called “promotion girls” but Heineken now calls them “brand ambassadors.” Many of them have to deal with sexual abuse at work: they are victims of groping, are put under pressure to have sex with managers to keep or get the job, and/or sell sex to supplement their meager earnings.

In 2018, when I first uncovered the widespread sexual abuse of these women, Heineken promised quick improvements. If the company couldn’t guarantee good working conditions in a particular country within three months, it would cease its promotion activities there. Yet, when I discovered that in Kenya nothing had changed after the self-imposed deadline, Heineken broke its own promise and simply continued exposing the women to sexual harassment.

Moreover, instead of taking full responsibility, Heineken’s current CEO, Jean-François van Boxmeer, blamed the intermediary agencies that hire the women in most countries. “We can’t control everything,” he said in an interview in the Dutch financial newspaper FD. Commenting on the short and tight dresses the women have to wear on the job, in which many feel uncomfortable, he said: “Should they walk around in a sack of potatoes instead of a nice dress? You can endlessly discuss about that.” Van Boxmeer further pointed at the “huge cultural differences” between various countries. The Heineken CEO considers #MeToo “a western phenomenon.”

During last year’s annual shareholder meeting, he admitted to having an affair with a beer promoter when he was expat director in Kinshasa in the 1990s. He called it “a consensual love relationship” and he was applauded by his shareholders for admitting to the affair, which had no consequences for his position.

The treatment of the promotion women is one of many examples of Heineken’s controversial business conduct in Africa. After more than six years of investigating its operations, I discovered that the global number two beer company (behind Anheuser Busch Inbev) got involved in structural malpractice and numerous alleged crimes, including high-level corruption and fraud. Through a Belgian subsidiary, the company has set up a scheme of tax avoidance.

In my book Heineken in Africa, I show that the company was also allegedly complicit in crimes against humanity. Currently in Burundi, Heineken’s activities represent 10 per cent of the GDP and more than 30 percent of the tax revenues. Thus it’s the main pillar and lifeline for Pierre Nkurunziza’s authoritarian regime, and it can be argued that Heineken is complicit in the crimes that were committed there; in Congo, the company collaborated with the violent rebel movement RCD and was a source of revenue for another, M23; while in Rwanda, it played an important role in the 1994 genocide. There, Heineken continued to brew beer in Rwanda, knowing that it was used to motivate and reward the killers. And it continued to pay taxes to the regime that committed the genocide.

The book also argues that Heineken’s contribution to economic growth, employment and development in most countries is negligible and likely to be negative, if the costs for the economy and society are taken into consideration.

Despite these concerns, Heineken is a company with an outstanding reputation for its activities on the continent. The company has convinced governments, business partners and NGOs that its presence is highly beneficial to African host nations—a win-win. To emphasize this, Heineken uses slogans like “Brewing a Better World” and “Growing Together in Africa.” It created the Heineken Africa Foundation, a charity that spends just over $USD 1 million per year to “bridge the gap between the haves and have nots in Africa.” Heineken’s African activities are the equivalent of its “Dutch secret”: the company that transformed an average beer into a premium product cherished by the world has likewise succeeded in presenting itself as a corporate benefactor for Africa.

Essentially, the company is using the same recipe: marketing and story-telling. Over the years, Heineken created a positive narrative in Africa. The continent is presented as a minefield: people are poor so they can’t buy as many beers as elsewhere, the infrastructure is in bad shape, so it’s hard to distribute the product, and poor education levels make it hard to find skilled employees.

But Heineken, almost miraculously, conducts successful business here, claiming it complies with all the laws and international guidelines. At headquarters in Amsterdam, a former manager spoke to me of his company as “an island of perfection in a sea of misery.” Although obstacles to business certainly do exist in many African countries, Heineken fails to mention that those same obstacles also make the continent very attractive. Poverty and bad roads make a competitor think twice before entering the market—and fewer players means higher profits. The lack of government regulation and poor education systems make it easier for Heineken to convince people that drinking its product is good for your health.

Nowadays, many governments, both in the west and in Africa, have put their hope in multinationals as motors for development. “Aid for trade” is a new mantra and Heineken has received huge sums in government subsidies for its African investments—with USAID as an important contributor. Heineken keeps growing in Africa, creating wealth for mostly western shareholders.