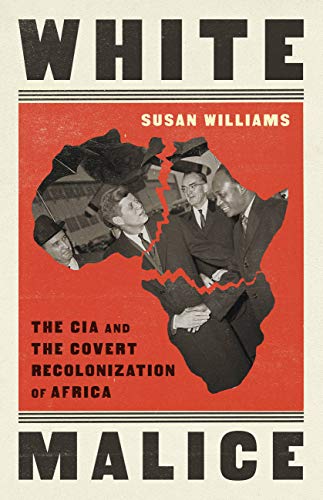 In November 1959, the CIA created a dedicated Africa division. According to British researcher Susan Williams, the CIA’s brief in Africa was to, by any means imaginable, secure American power across the continent.

CIA officers, and CIA cash, had been present on the continent since the agency’s inception 12 years prior. But as more and more African nations gained freedom from European colonial powers, the Cold War-paranoid United States grew increasingly concerned with controlling African nuclear material, African public opinion, and African governments, as Williams details in her sprawling new bookWhite Malice. In it, she treats CIA meddling in Ghana and the Congo as a lens on neocolonialism across Africa.

No single book could prove such a broad point fully. It seems to me, in fact, that attempting to use two nations’ histories to make a continent-wide argument dooms Williams’ project to partial failure. Still, althoughWhite Maliceis framed far too expansively, it overflows with fascinating information, original research, and bold ideas.

In fairness to Williams, too,White Malice‘s overwhelming geographical breadth does have some grounding: The book’s intellectual patron saint is Ghanaian prime minister Kwame Nkrumah, a brilliant Pan-Africanist who thought “the unity of Africa [was] the only vision that would secure the autonomy of individual African nations.”

Per Williams, the CIA undermined not only Pan-African unity but many African governments’ stability in order to obtain control over the continent’s non-aligned countries and, crucially, its natural resources — most of all the uranium at the Congo’s Shinkolobwe mine.

Nkrumah’s ideas may be atWhite Malice‘s heart, but the book’s actual narrative centers on the Congo’s first prime minister, Patrice Lumumba, a charismatic leftist who CIA director Allen Dulles characterized, per Williams, as “‘worse than Castro’.” American spies and diplomats, blinded by a combination of anti-Black prejudice and Cold War hysteria, wrongly pegged Lumumba as a Soviet dupe.

Williams uses declassified archival documents, including meeting transcripts, State Department memos, executive orders, and more, to effectively show that although the CIA covertly channeled money to him during his political ascendance, U.S. intelligence worked against him from the moment he took office, ultimately conspiring to kill him — although it remains unknown whether the Congolese secessionists who did murder him were backed or funded by the United States.

Even with this question open,White Malicewould be an infinitely stronger, more compelling book if it told only the story of Lumumba and the CIA. Williams relies heavily on archival research in her work, and she deploys primary sources to powerful effect when describing Lumumba’s rise, his rule, and the war that led to his fall.

Williams draws a vivid, appalling picture of the United States’s hostility to Lumumba. On his first state visit to Washington, President Eisenhower blew off their meeting, deploying an advisor to tell the Congolese delegation that he “prefer[red] to go and play golf than meet Lumumba.” Meanwhile, the CIA funded opposition figures including Joseph-Désiré Mobutu, the military officer who later became the dictator Mobutu Sese Seko.

It organized protests against him and planted newspaper articles that undermined popular support for his rule, Williams writes. Before long, the CIA was actively encouraging Congolese politicians to overthrow Lumumba. Williams implies that, without these clandestine American activities, there would have been no Congolese civil war; whether this ascribes more agency to the CIA than it had, or de-emphasizes other forces’ role in Congolese politics at the time, is hard to say.

Still, she effectively proves that American intelligence worked relentlessly to stack the deck — already stacked, of course, by global anti-Black racism and the legacies of Belgian colonialism — against Lumumba’s odds of establishing an independent democracy in the Congo.

It is difficult to know how great an impact the CIA truly had on the Congolese civil war, as it is difficult to know whether its plot to assassinate Lumumba ultimately had any success. According to the Congressional Church Committee, which began to investigate CIA malfeasance in the 1970s, the CIA did not kill him. But Williams distrusts the committee’s findings. She focuses a full chapter on justifying her belief that American intelligence had a clandestine hand in Patrice Lumumba’s death. Although she cannot prove this point — her argument hinges, ultimately, on a CIA asset’s gas reimbursement paperwork, a finding too small to be conclusive — she effectively calls the Church Committee’s findings into question.

IfWhite Malicewere more focused on Lumumba, it might end with a call to action, asking both historians and the American reading public to seek a new inquiry into the Congolese prime minister’s murder. Instead, its final chapters rove between countries and topics, sometimes sliding into conjectures about other un-provable CIA misdeeds.

It is unfortunate that Williams lets herself get distracted in this way, and more unfortunate still that her desire to write a book applicable to all of Africa’s post-colonial history overshadows her excellent, infuriating work on the CIA and Patrice Lumumba. Were this a narrower book, it would be a better one by far.

Lily Meyer is a writer and translator living in Cincinnati, Ohio.