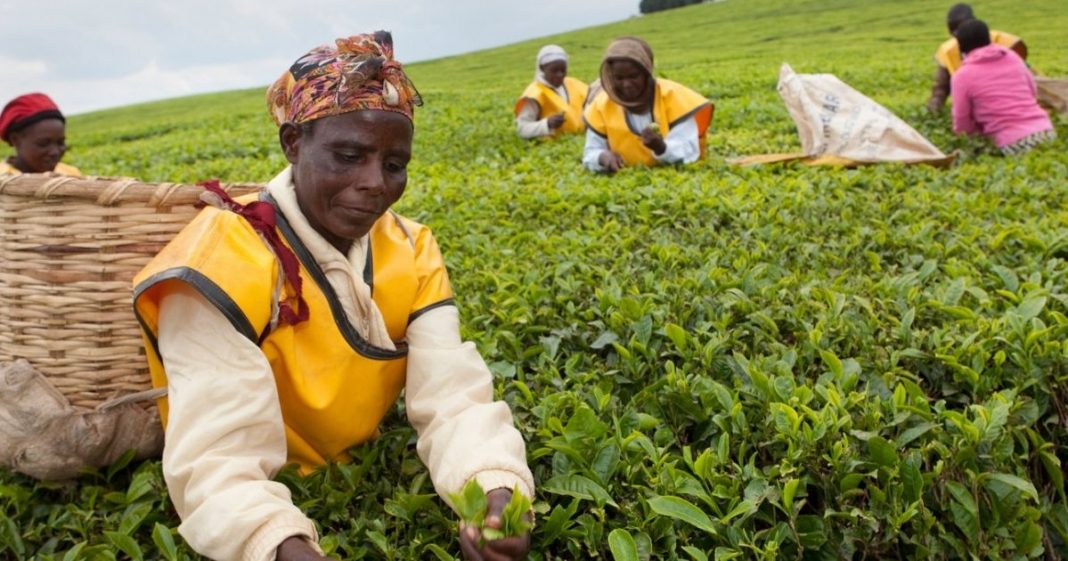 On a cool Tuesday evening in Kapkugerwet village in Kenya’s Kericho County, Lucy Cheres puts a tea basket on her hunched back and heads out to the small tea farm in front of her house. There, she starts plucking tea leaves for the next day’s sale. It is an art she has perfected after 15 years of working as a casual labourer at a nearby tea plantation owned by the British-Dutch consumer goods conglomerate Unilever. But in 2015, Cheres was among the thousands of workers who lost their jobs after the company introduced tea picking machines.

“This same tea I’m picking right now is what I planted using my salary from the company job,” says the 58-year-old mother of five. It is back-breaking work that demands long hours for very little pay, but it has helped feed her family for all of these years. Cheres currently sells her leaves to the Kenya Tea Development Agency (KTDA) for about 16 Kenyan shillings (US$0.15) per kilo. She and her family only have enough tea planted to pick about 60 kilos a month, which is done over two days. For the rest of the time Cheres picks tea for other smallholders where she makes just Ksh7 per kilo.

Kenya is the world’s biggest exporter of black tea and Kericho County is Kenya’s leading tea producing area. Tea farming in Kenya is practised by small-holder farmers, like Lucy, who account for 60 per cent of tea production in Kenya (and mostly sell their tea to the KTDA), and on tea estates owned by large-scale producers, like Unilever. Until quite recently, the tea estates relied on manual labourers who would pluck the tea leaves as workers had done for almost a century.

But these days, there are fewer workers, replaced in large part by plucking machines. Each machine is operated by two workers and can harvest hundreds of kilograms of tea leaves within a short period of time. But what the machines achieve in volume they lose in quality as they can only reach the larger, older leaves which aren’t as fresh as the delicate, young leaves (of the ‘two leaves and a bud’ plucking standard) that skilled manual pickers are able to obtain.

Kericho is dominated by huge swathes of tea plantations set up on land violently stolen from the Kipsigi and Talai peoples by the British colonial administration in the early 20th century. In 2019, more than 100,000 people – the descendants of those forcibly removed by the British – petitioned the United Nations for reparations and an official apology from the UK government for the murder, torture, rape and mass displacement of the traditional owners of the land. To date there has been no apology nor any form of reparations from the UK government.

And yet, UK-headquartered companies such as Unilever (which owns 20 tea estates and eight factories in Kenya, manufacturing an average of 32 million kilogrammes of tea every year), James Finlays and Williamson Tea continue to reap multimillion dollar profits as some of the world’s leading tea producers, employing up to 80,000 in direct jobs and up to three million people throughout the value chain.

In June 2016, Kenya’s Employment and Labour Relations Court ordered the country’s tea companies to increase the wages of its workers by 30 per cent following legal action by the Kenya Plantations and Agricultural Workers Union (KPAWU) over a contested collective bargaining agreement. Immediately after the judgement the managing director of Unilever Kenya said the judgement was not “affordable” for the company.

Two years later, in 2018, Unilever Tea Kenya offered voluntary redundancy to 11,000 workers. To date it is not known how many workers lost their jobs, which Unilever described at the time as necessary to keep the business “agile, fit to compete and efficient”. However, for Meshack Khisa, deputy secretary-general at the KPAWU, there was nothing voluntary about these redundancies. The union says that Unilever targeted unionised workers and broke Kenya labour law. The KPAWU even went to court to try and halt the redundancies but the objection was overruled.

A report commissioned by the Federation of Women Lawyers in Kenya in 2019, and made public last year, revealed that women constitute most of the workforce in the large and small tea farms of Kericho. They are mainly engaged as tea pickers, and, in most farms, occupy the lowest pay grades – mainly because ‘skilled’ labour involving heavy machinery or working at heights is considered unsuitable for women.

According to Khisa, the multinationals are taking advantage of the loopholes that exist in Kenyan law, as well as exploiting the readily available labour to maximise on profits. “As a trade union, we have been reviewing wages after every two years. Now they feel that paying the agreed salaries is too expensive and they want to outsource cheaper labour so that they can pay as low as Ksh 6,000 (approximately US$54) monthly,” he says.

At her village in Kapsuser, a few kilometres south of Kericho town, 34-year-old Gladys Chepkemoi sits outside of her hut as she breastfeeds her infant baby son. She had just gone back to work as a tea plucker at James Finlays after her maternity leave when she was told by a friend that the company was making redundancies.
She says that the news “broke” her. “I was depending on that job to feed my family since all my husband does is drink his money away and leave us to suffer.”

In December 2020, James Finlays let go of 719 workers, most of whom were tea pluckers. The company director for corporate affairs Sammy Kirui tells Equal Times that the retrenchments were an unfortunate necessity: “It’s all about driving down the cost of operation, which has become very high. And you see, low [tea] prices are what is driving the company to consider options to remain profitable and sustainable.” He says that the mechanisation of previously manual jobs is inevitable.

Khisa says this is just an excuse so that the tea companies can avoid paying the salary increases that collective agreements assure permanent employees every two years. “The idea behind it all is that salary scales have grown over the years and they feel paying these salaries is a heavy burden on them. They would rather remove the old serving employees and then outsource or contract out labour,” Khisa asserts.

He reiterates that the majority of those affected are women. “They come from the neighbouring communities, which have been really badly affected by these redundancies,” he says.

Kenya is a signatory to the Protocol to the African Charter on Human and Peoples’ Rights on the Rights of Women in Africa, better known as the Maputo Protocol, which came into effect in November 2005. The Maputo Protocol contains several well-elaborated provisions aimed at ensuring that states take appropriate action to eliminate discrimination against women, protect their right to dignity, and economic and social welfare rights, among other points.

But for the 30,000 women and counting who have lost secure work and are now denied a livelihood in Kenya’s tea supply chain, these rights are completely out of reach.

Dominic Kirui is a freelance journalist based in Nairobi, Kenya. He specializes in themes such as climate change, food security, gender, culture, global development, and governance.