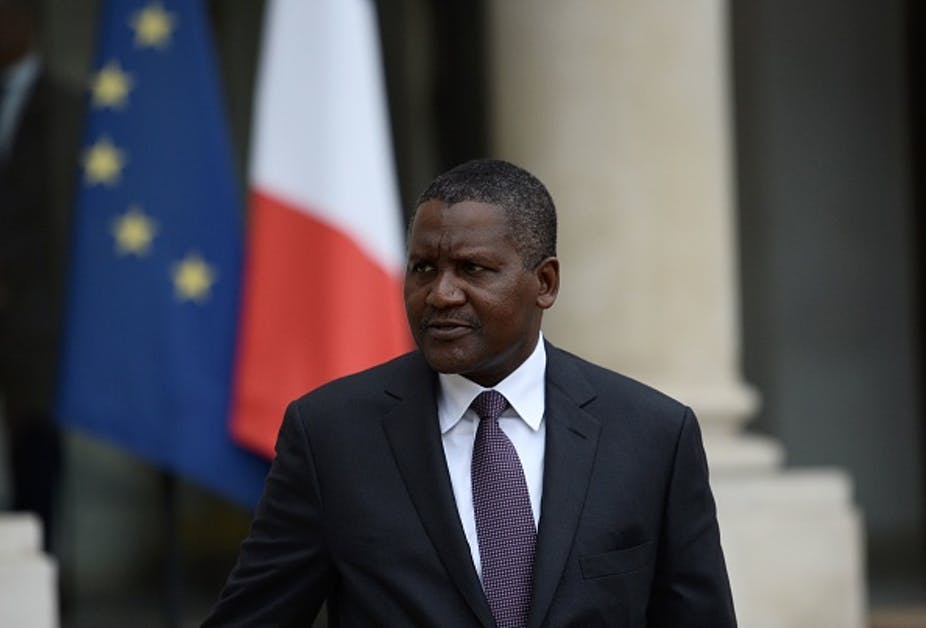 Dangote Industries Limited dominates the Nigerian cement market and is a key player in the rapidly expanding African cement business. The conglomerate has also expanded its manufacturing activities in a range of food processing industries such as sugar and salt. This expansion has made it the biggest group listed on the Nigerian Stock Exchange.

By 2020, the three Dangote subsidiaries listed on the Nigerian Stock Exchange employed 19,672 workers. This is equal to 51% of all workers in listed manufacturing firms.

Dangote has been a main beneficiary of Nigeria’s backward integration policy. Introduced in 2002, it was operated through tariffs, levies, and tax breaks. In the last few years, Nigerian manufacturing has shown some degree of recovery. Manufacturing’s share in output increased to 9.3% in 2017, up from 6% in 2002 (calculations based on UN National Accounts).

The policies were initially designed for cement and beverages. They were later extended to sugar, rice, tomato paste, automotive, oil and gas, and textiles. The changes led to Nigeria emerging as the largest cement producer in sub-Saharan Africa.

Is the rise of Dangote’s group therefore an illustration of successful industrial policy? Not quite, we argue in our recently published research.

Dangote might be an example of a successful and dynamically expanding manufacturing firm in Nigeria. But structural transformation across the Nigerian economy remains very limited.

We tried to unpack why this is so. We argue that a key challenge for late-industrializing nations like Nigeria is to support the development of domestic demand for goods at the same time as policy is being used to develop the capacity of industries to increase production.

Both need to work together if there is going to be structural change across the economy beyond the development of a few industrial islands of efficiency.

In Nigeria, public policy has failed to support the development of structures that can nurture the growth of domestic demand for goods. This is itself the result of historically formed power relations or asymmetries between actors in their ability to influence and exert power.

The industrial policy that made import licenses contingent on setting up domestic supply capacity – backward integration – may have encouraged increases in output and productivity in individual firms such as Dangote’s. But these productivity increases were not passed down to consumers through price reductions, higher wages for workers, or other redistributive measures such as taxation of corporate profits.

If that is the case, for any given level of capitalist consumption and investment, effective demand and output will fall. This follows from the economist Michał Kalecki’s “paradox of costs”. While an increase in wages increases an individual firm’s costs of production and cuts into profit margins (that is, profits per item sold), the aggregate level of output that can be profitably sold increases. And with it overall sales and the profit rate.

This is because workers and subsistence collectivities have a higher propensity to consume than capitalists.

In contexts where firms respond strongly to increases in demand as has been the case in Nigeria, the results are only individual islands of efficiency as well as limited structural transformation in the economy as a whole, given that demand growth has not been supported by industrial policy.

Structural change is almost universally recognized as the key development challenge for sub-Saharan African economies. There is equally growing recognition that industrial policy is necessary to ignite structural transformation because productivity increases rely on tacit knowledge about how to operate machines and organize production.

This can only be acquired through the production process itself.

The key issue revolves around the conditions under which industrial policy can be successfully implemented because learning ultimately depends on the active effort of firms. This can be difficult for government to enforce. A significant analytical breakthrough here comes from the insight that industrial policy instruments have to match the distribution of power in society.

We argue that the likelihood of successful implementation of industrial policy increases with expanding markets (rising demand). Expectations by industrialists of market expansion can act as an incentive to achieve productivity increases.

Conversely, if market conditions are contracting, the “size of the prize” might be too low for firms to warrant high levels of effort in learning beyond cashing in subsidies from industrial policy. This was highlighted, for instance, in Ethiopia’s apparel industry.

Hence, the size of the market is critical in sustaining structural transformation across the economy.

We show that substantial capital formation by Dangote’s firms was spurred by expectations about rising domestic demand and that learning has taken place. We did this using data from balance sheets, statements of Dangote’s senior management to their shareholders, and media interviews.

Meanwhile, the cost-revenue ratio in Dangote Cement declined and is substantially lower when compared to Lafarge, its closest competitor in the Nigerian cement market.

Dangote Cement’s revenues increased at a faster rate than their costs, while cost and revenue grew roughly in line for Lafarge. Since the two companies can charge the same price in Nigeria, it suggests productivity increases in Dangote Cement.

As a result of productive investments, Dangote extended its lead over competitors, resulting in monopolistic market structures.

Meanwhile, Dangote has successfully co-opted opposition groups and rival civil society groups as ruling elites change to guarantee the continuation of the government’s backward integration policy. As this paper shows, Dangote Industrial Limited has been a major beneficiary.

It is true that monopolistic market structures are an outcome of productive investment. But the political and economic power of Dangote favored a disproportionate growth in profits relative to the purchasing power of wage-earners and subsistence collectivities.

This meant that the domestic market (demand base) was left vulnerable.

This vulnerability is worsened by economic shocks such as the 2014 fall in oil prices. This resulted in a depreciation of the exchange rate. In turn, this put pressure on domestic prices. The effect was dwindling purchasing power of lower-income households as well as an increase in the costs of imported raw materials needed in production.

More unequal distribution of income and wealth makes the demand base more sensitive to such externally induced shocks and hence undermines the initial driver of productivity growth while also limiting space for other firms.

Notably, profits across the conglomerate increased faster than wages. In Dangote Cement, average wages per employee in 2018 were lower than in 2011. Profits more than trebled in that period.

Moreover, the effective tax rate was just under 5%. This left limited resources for pro-poor redistribution.

Dangote does not single-handedly control the growth of purchasing power of the entire economy. Nevertheless, firm-level observations for Dangote reflect the distributional dynamics in Nigeria and mirror the wider trajectory of the wage share in Nigeria. This has been falling since the wake of structural adjustment of the 1980s.

In short, responses to demand can drive competition and productivity increases and can underpin successful implementation of industrial policy in the sense of enforcing learning effort. Nevertheless, the outcome of such responses to demand can be monopolies, which – paradoxically – can undermine demand by undercutting purchasing power of workers and subsistence communities.

Demand-side conditions for successful implementation of industrial policies and sustained structural transformation have long been absent from the debates both on a theoretical level as well as in policy terms.

But demand growth is closely linked to the distribution of income and wealth. The expansion of domestic markets alongside – and as a basis for – export growth is important in supporting late industrialization. Therefore, successful industrial policy is not only contingent on achieving productivity increases. It is also contingent on pro-poor, pro-labor distributional outcomes.

Richard Itaman is a Senior Research Associate at Jesus College, University of Cambridge

Christina Wolf is a Senior Lecturer in Economics and leader of the Political Economy Research Group, Kingston University