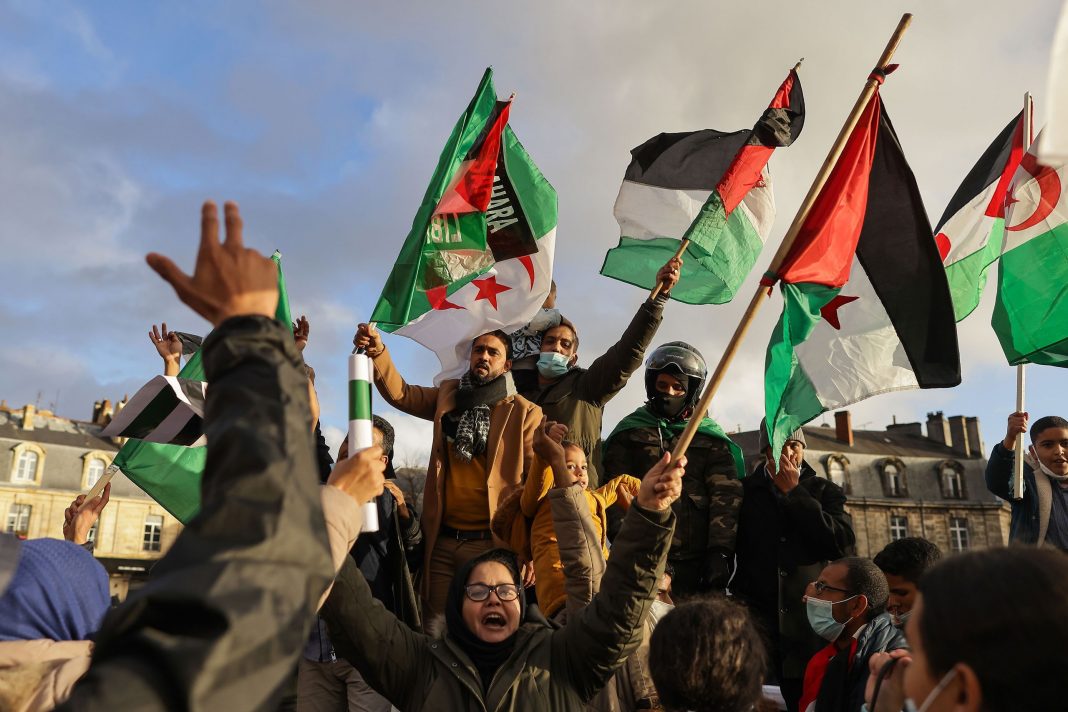 One of Donald Trump’s last acts of foreign policy was a tweet. On December 10th, he announced that he had signed a proclamation recognizing the Moroccan government’s claim to the Western Sahara, a sprawling and bitterly disputed former Spanish colony that Rabat annexed in 1975. In return, Morocco agreed to recognize the state of Israel. Jared Kushner, the President’s son-in-law and the orchestrator of the deal, claimed that the Administration’s goal was humanitarian. Kushner said that the American declaration of a Moroccan victory would improve the lives of members of the Polisario Front, who have called for the independence of the Western Sahara for forty-seven years. “We want the Polisario people to have a better opportunity to live a better life, and the President felt like this conflict was holding them back,” Kushner said.

Trump and Kushner’s statements reflected a mix of opportunism, cynicism, and ignorance. In his tweet, Trump said, “Morocco’s serious, credible, and realistic autonomy proposal is the ONLY basis for a just and lasting solution for enduring peace and prosperity!” That language appeared to have been cribbed from an interview that the former French President Nicolas Sarkozy gave to a Moroccan newspaper in 2007, which used the phrase “serious and credible” to describe a Moroccan plan for creating an autonomous Western Saharan region without full independence. Kushner’s statement about wanting to help “the Polisario people,” rang hollow, too. The indigenous people who live in the disputed region are called the Sahrawis; Polisario is the name of their left-leaning rebel group. And most of the hundred and seventy thousand Sahrawi refugees who are currently living in desert camps in Algeria do not want to return to the lands that Morocco seized. They fear the kingdom’s secret police, who have limited freedom of speech and have frequently beaten and detained activists.The United Nations Human Rights Commission’s working group on arbitrary detention recently cited the Moroccans for the arrest and torture of the Sahrawi journalist Walid el-Batal, after videos emerged of him being beaten by police in the city of Smara.

Trump’s recognition-by-tweet of a decades-old Moroccan territorial claim has left the Biden Administration in a dilemma. Weeks before Trump made his announcement, fighting between Morocco and the Polisario erupted for the first time since 1991. A renewed conflict could destabilize a region already beset by active insurgencies in Mali, Niger, and Burkina Faso. Algeria, which backs the Polisario, has been weakened by a constitutional crisis and the covid-19 pandemic. (The President of Algeria, Abdelmadjid Tebboune, was incommunicado for two months last fall, while he received treatment for the disease in Germany.) “I think there’s a lot of potential for this to inject more volatility into a region that doesn’t need more volatility,” Andrew Farrand, an expert on North Africa and the author of “The Algerian Dream,” an upcoming book about the country, told me.

In the two weeks since the Inauguration, President Biden has been silent on the Western Sahara issue. Morocco has reportedly held off on implementing the deal with Israel, and is waiting to see whether the new Administration adheres to the Trump-era plan to open an American consulate in the Western Saharan city of Dakhla, viewing it as a bellwether of U.S. intentions. Polisario representatives told me that they hoped that Biden would reverse Trump’s proclamation. “Someone with the background of President Biden cannot ignore international law, and we are confident that he will not endorse the illegal transaction done by former President Trump,” Mouloud Said, the Polisario’s representative in the United States, told me. “We believe the sooner the Administration rectifies President Trump’s decision, the sooner international law will be reinforced.”

Over several months in 2017 and 2018, I reported on the conflict for the New Yorker. When I arrived in the Moroccan-controlled part of the disputed territory, I was detained before being allowed to disembark from the plane and deported. For years, Moroccan officials have blocked journalists from entering the territory to prevent them from reporting on government repression of pro-independence Sahrawis. In the Polisario-controlled area, members of the rebel group drove me for days through the desert. Teams of young Sahrawis tried to clear mines and cluster munitions, many of which had been sold to Morocco by the United States and European nations. I visited a fifteen-hundred-mile sand berm—the longest defensive fortification in use today—which Morocco constructed in the nineteen-eighties to split the Western Sahara in two. The wall stretches from the Atlantic Ocean to the mountains of Morocco, roughly the distance from New York City to Dallas. Throughout the Cold War, the United States largely backed Morocco in the conflict. The Polisario was seen as pro-Soviet, and received support from Muammar Qaddafi’s Libya, as well as Algeria and Cuba.

I also interviewed James A. Baker III, the former U.S. Secretary of State who worked for a referendum in the Western Sahara in the early two-thousands. As part of a 1991 ceasefire agreement, the U.N. had promised the Sahrawis a referendum on independence. Baker called for continued negotiation between the two sides, and lamented that the referendum has not yet been implemented. After Trump’s tweet in December, Baker released a statement condemning Trump for “cynically trading off the self-determination rights of the people of Western Sahara,” and added, “It would appear that the United States of America, which was founded first and foremost on the principle of self-determination, has walked away from that principle regarding the people of Western Sahara. This is very regrettable.”

Since Trump’s announcement, according to human-rights groups in the Moroccan-controlled part of the territory, police have filled the streets of towns and cities there and prevented activists from leaving their homes. Pro-government protesters have also filled the streets, harassing people who appear to support independence. I recently spoke by telephone to Aminatou Haidar, a leading Sahrawi human-rights advocate, who has been dubbed the “Sahrawi Gandhi” for her embrace of nonviolent resistance. “The situation has deteriorated,” she said. “We are scared that Morocco will be encouraged to abuse human-rights defenders.” She, too, called for Biden to reverse Trump’s proclamation, adding, “I would like to appeal to the Biden Administration to take this on their shoulders, and defend the rights of the Sahrai people.” Naziha El Khalidi, another activist in the Moroccan-controlled zone, told me that she was “shocked” that Trump had traded away the Sahrawi people’s right to self-determination. “It’s against U.S. foreign policy itself, which was seeking for thirty years to find a peaceful solution in Western Sahara and supporting the U.N. process.”

In the spring of 2018, it appeared that the Trump Administration would take a different approach toward the dispute. Trump’s appointment of John Bolton as national-security adviser gave hope to the Sahrawis that their cause would receive more attention in Washington and in European capitals. Bolton had worked on the issue in the past with Baker, and when he unveiled the Trump Administration’s policy in Africa, he said that there should be “intense pressure” to resolve the Western Sahara dispute. Moreover, in 2017, the U.N.’s new Secretary-General, António Guterres, had appointed a special representative to the territory, who was making headway in negotiations between the different parties.

But in 2019 the diplomatic process stalled: preliminary peace talks went nowhere; the U.N. special envoy had to resign in May, due to health problems; and Trump fired Bolton in September of that year. Into that vacuum stepped Kushner, as he travelled around the Middle East, trying to drum up support for his peace deal, which centered on convincing Arab nations to recognize Israel. Barak Ravid, of Axios, detailed how an ex-Mossad agent with ties to the Moroccan business community first suggested the idea of recognizing the claim on Western Sahara. According to the Times of Israel, the Israeli Prime Minister, Benjamin Netanyahu, agreed.

The U.S. Secretary of State, Mike Pompeo, reportedly supported the plan, as well, but his meeting with King Mohammed VI was cancelled when the king declined to back it. Mohammed, who has expressed his support for a Palestinian state in the past, initially decided that outright recognition of Israel would go too far. After several meetings with Kushner, he changed his mind. “Kushner managed to make friends with the king,” Anna Theofilopoulou, a former U.N. official who worked in the region, told me.

One factor that added urgency to the negotiations was the new outbreak of fighting between Polisario and Moroccan forces. Last November, the Moroccan government sent troops into a buffer zone, after a series of protests by Sahrawi civilians. On November 13th, the Polisario leadership declared the deployment of Moroccan soldiers to be a direct violation of the ceasefire. Since then, the Sahrawis have launched regular missile and artillery attacks against the Moroccan-built Berm. Casualty numbers are hard to come by, because the Moroccans insist that the Polisario rebels aren’t causing any damage. Polisario leaders vow that the violence will intensify. “This is only the beginning,” a senior official told Middle East Eye. On Tuesday night, according to a Sahrawi communiqué, five Moroccan soldiers were killed in a raid deep inside Moroccan territory. So far, the Moroccans have not acknowledged any casualties.

A new generation of Sahrawi nationalists say that their desire for independence remains resolute. Hamahu-Allah Mohamed, a young diplomat, told me that his peers are committed to the struggle against Morocco. He said, “The youth, it’s our belief that we will fight until death.”

As has been the case for decades, it is the Sahrawi people who stand to lose the most. After Trump’s tweet, I called several of the Sahrawis I had met during my time reporting there. Mohamedsalem Werad, an editor at Sahrawi Voice, a digital-media outlet in the desert camps, said that prevailing Sahrawi opinion once held that the United States was the upholder of international law. “Now they are spitting in our faces,” he said, referring to Trump’s tweet. “They made us into a laughingstock for believing that there is an international community that cares.” But Hamahu-Allah Mohamed, the young diplomat, said that the one benefit from the Trump episode is that it has made the issue more of a priority to Biden and other international leaders. He told me, “People in the U.S., even academics, didn’t know about this issue until Trump brought it up.”

Nicolas Niarchos is an author currently working on a book about the global cobalt industry.