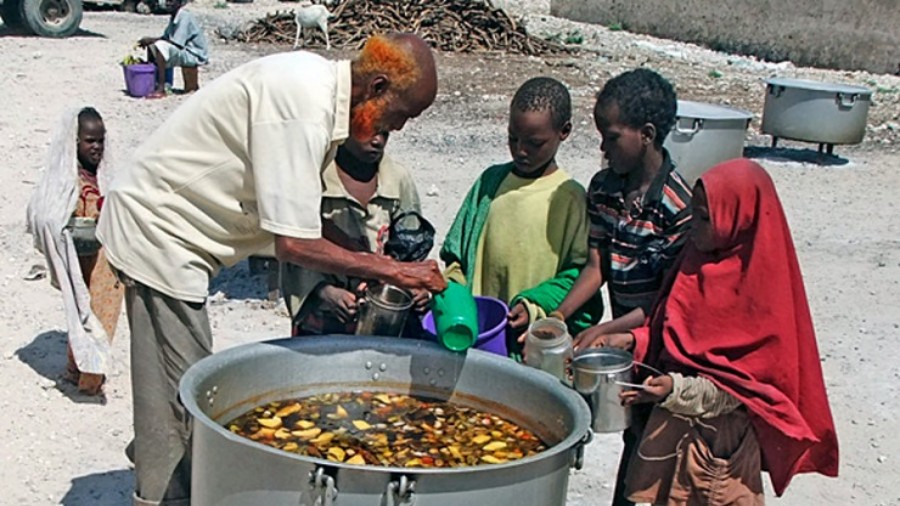 THE same Gates Foundation which is behind every aspect of the COVID-19 pandemic from financing much of the WHO budget, to investing in favoured vaccine-makers like Moderna, is engaged in a major project in Africa which is destroying traditional small farmer production of essential food crops in favour of monoculture crops and introduction of expensive chemical fertilizers and GMO seeds that are bankrupting small farmers. The project, the Alliance for a Green Revolution in Africa, known as AGRA, is directly connected with key global institutions behind the World Economic Forum’s Great Reset.

If we know the actual history of the Rockefeller Foundation and related tax-free undertakings of one of the world’s most influential families, it is clear that in key areas the Bill and Melinda Gates Foundation has inherited the Rockefeller agenda from the medical industrial complex to education to agriculture transformation.

The Bill and Melinda Gates Foundation, working in tandem with the closely allied Rockefeller Foundation, is not only at the centre of the orchestration of unheard-of severe economic lockdown measures for the much-disputed COVID-19 illness. The Gates foundation is also at the very centre of the UN Agenda 30 push to transform world agriculture into what they call ‘sustainable’ agriculture. A keystone project for the past 14 years has been Gates’ funding of something called the Alliance for a Green Revolution in Africa or AGRA.

WHEN the Bill and Melinda Gates Foundation founded AGRA in 2006, joined by their close ally, the Rockefeller Foundation, they proclaimed their goal was to ‘tackle hunger in Africa by working to achieve a food secure and prosperous Africa through the promotion of rapid, sustainable agricultural growth based on smallholder farmers.’ AGRA promised to double the agricultural yields and incomes of 30 million small-scale food producer households by 2020. It is now 2020 and it has been a total failure in this regard. Notably, AGRA deleted these goals in June 2020 from its website without explanation. Based on what they have done we can assume that was never the true goal of Gates and Rockefeller foundations.

In a 2009 speech in Iowa promoting his New Green Revolution for Africa, Bill Gates declared, ‘The next Green Revolution must be guided by smallholder farmers, adapted to local circumstances, and sustainable for the economy and the environment.’ The Gates Foundation proclaimed that the AGRA ‘is an Africa-based and African-led effort to develop a thriving agricultural sector in sub-Saharan Africa.’ Sounds very nice. Reality is quite different.

To further that ‘African-led’ impression, Gates hired the former UN secretary general, Ghana’s Kofi Annan. Annan had just retired amid an Iraq oil-for-food corruption scandal at the UN involving his son. Annan was to be the front face, the chairman of AGRA. In reality the Gates Foundation ran things, with their guy, Rajiv ‘Raj’ Shah, directing implementation of policies in African target countries. When initial attempts to push Monsanto GMO seeds and pesticides on GMO-free African farmers met with great resistance, they shifted instead to sell conventional but Monsanto-owned seeds along with costly chemical fertilisers and pesticides.

Suspiciously, the Gates Foundation and AGRA have been anything but open and transparent about what they have accomplished in 14 years. For good reason. The model they have pushed in 13 African countries  has significantly worsened the food self-sufficiency of small farmers and instead created debt traps in which small producers are forced to take on heavy debt to buy expensive patented seeds, are forbidden to use own seeds or mixed crops, and forced to produce cash crops in a monoculture for export. AGRA has received more than $1 billion dollars from mainly the Gates Foundation, with USAID and the UK and German governments adding smaller sums.

IN A new detailed report evaluating results country-by-country, the reality of the Gates Africa agriculture project shows alarming, but not surprising, results. The report is called False Promises: The Green Revolution in Africa. It was prepared by a group of African and European NGOs in collaboration with Timothy A Wise, senior advisor at the Institute for Agriculture and Trade Policy of Tufts University. The report concluded, ‘yield increases for key staple crops in the years before AGRA were just as low as during AGRA. Instead of halving hunger, the situation in the 13 focus countries has worsened since AGRA was launched. The number of people going hungry has increased by 30 per cent during the AGRA years… affecting 130 million people in the 13 AGRA focus countries.’ That is no minor failure.

In an approach that is little different from the 19th century racist European colonial practices, the Gates Foundation and its AGRA have seriously harmed small-scale food producers by subjecting them to high levels of debt. In Zambia and Tanzania, small-scale food producers were unable to repay the loans for fertiliser and hybrid seeds after the first harvest. AGRA projects also restrict the freedom of choice for small-scale food producers to decide for themselves what they want to grow. AGRA forces them to a one-sided cultivation of mainly maize for export markets, what global agribusiness wants. Not surprising as Bunge and other international grain cartel companies are involved with AGRA. Traditional climate-resistant and nutrient-rich crops have declined in alarming degrees in many cases.

The study found that for millet, an indigenous and vital cereal and fodder grain favoured for 7,000 years due to its productivity and short growing season under dry, high-temperature conditions, AGRA has produced disaster. The report notes, ‘millet production fell by 24 per cent in the 13 AGRA focus countries from 2006 to 2018. Moreover, AGRA lobbies governments on behalf of agricultural corporations to pass legislation that will benefit fertiliser producers and seed companies instead of strengthening small-scale food production.’

Rather than help local small farmers to improve their yield per acre, the AGRA merely repackages the 1960’s Green Revolution in Mexico and India for Africa, home to some of the world’s richest farmland soils. That Green Revolution of the 1960s, initiated by the Rockefeller Foundation, introduced industrial large-scale agriculture mechanisation and introduction of chemical fertilisers and seeds from multinationals which went to the benefit of large farmers and destroyed much of the economy of small producers. That predictably bankrupted countless small producers. The result was that while select wealthy producers thrived, millions of poorer farmers were forced to flee to the cities where they settled in urban slums. But that in fact was a major aim of the first Green Revolution as it created a cheap workforce for the globalisation drive of manufacture that was to follow.

The Gates and Rockefeller foundation-led AGRA in Africa is little different.  In 14 years, AGRA in Africa has influenced member governments to promote buying of multinational companies’ commercial seeds every year and expensive chemical fertilisers, by promising grand gains that do not materialise. In the process traditional small farmers or farming communities are forbidden to use farm-saved or -bred seeds.

This is the same dependency model Monsanto and agribusiness has used with patented GMO seeds in the USA. The Gates Foundation is a significant shareholder in Monsanto, now part of Bayer AG. AGRA has done little or nothing to protect small farmers from being bankrupted by subsidised EU or USA imports. Instead their traditional food crops are being displaced by monoculture maize production for international export, leaving African countries more than ever dependent on more imported foods. The Gates AGRA is succeeding, but not in its cosmetic stated goals. Rather it has made African food production more globalised and dependent than ever on the will of global multinationals whose aim is cheap inputs. Under the ruse of giving farmers a ‘wider choice’ of patented high-yield seeds (mostly for maize), they in fact limit a farmer’s choice. He must buy those seeds and is forbidden to reuse his own indigenous seeds. If at harvest time farmers are unable to sell his AGRA-mandated maize to repay his debt for seeds and fertiliser, they often are forced to sell their precious cattle or to incur even more debt — a classic colonial debt slavery model.

THE Gates Foundation has promoted AGRA as an ‘African initiative’ and put itself as far as possible in the background. The new chairman of AGRA since August 2019 is Hailemariam Desalegn, former prime minister of Ethiopia. Desalegn, former chairman of the Chair of the Ethiopian People’s Revolutionary Democratic Front, the dictatorial ruling party where the World Health Organisation head Tedros was also a politburo member, was forced to resign in 2018 following mass protests.

Less public board members of AGRA include two leading executives of the agribusiness giant, Unilever, and two senior officials of the Gates Foundation, as well as from the Rockefeller-founded Consultative Group on International Agricultural Research. Other board members include a member of the Rockefeller Foundation trustees and a former African partner for the French bank, Rothschild & Cie.

Since 2014 the president of AGRA has been a controversial Rwandan former agriculture minister under the corrupt Kagame dictatorship. Agnes Kalibata also is a member of the Global Agenda Council of the World Economic Forum, the International Fertiliser Development Corporation, based in USA.

In December, 2019, just before the public alarm over outbreak of a ‘novel coronavirus’ in Wuhan China, UN secretary general, António Guterres, named Kalibata to head the 2021 UN  Food Systems Summit. In response, some 176 organizations from 83 countries, wrote to Guterres to repeal her appointment. Their letter stated, ‘Founded by the Bill and Melinda Gates Foundation and the Rockefeller Foundation, AGRA’s efforts have centred on capturing and diverting public resources to benefit large corporate interests. Their finance-intensive and high input agricultural model is not sustainable beyond constant subsidy, which is drawn from increasingly scarce public resources. Since 2006, AGRA has worked to open up Africa — seen as an untapped market for corporate monopolies controlling commercial seeds, genetically modified crops, fossil fuel-heavy synthetic fertilisers and polluting pesticides.’ In her defence 12 voices wrote to Guterres urging him to stand firm. Eleven of the 12 had links to the Gates Foundation. Their voice prevailed.

During the global grain crisis of the mid-1970’s the then US secretary of state Henry Kissinger, another Rockefeller protégé, allegedly declared ‘Who controls the food controls the people.’ The globalisation of world food production and creation of agribusiness, first guided by the Rockefeller Foundation and today with the Gates Foundation taking a more visible lead, is perhaps the most threatening factor to world health and mortality, far more than any coronavirus has shown. Notably the same people promoting fear and lockdowns for that putative virus are busy reorganising world food production in an unhealthy manner. It seems to be no coincidence as Bill Gates is a known advocate of eugenics and population reduction.

William Engdahl is a strategic risk consultant and lecturer. He holds a degree in politics from Princeton University and is a best-selling author on oil and geopolitics.