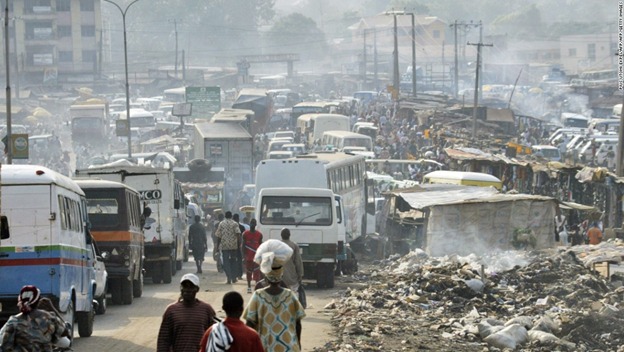 After a normal Lagos night, it’s the early hours of a sweltering morning in the dry season. Throughout the night, the residents of practically every home on the city’s mainland battled two devils: heat and darkness.

They’ve gotten up early in order to catch the next bus to safety. Thousands of people are squeezing into a small number of vehicles. Long lines greet the arrival of each day.

Everyone congregates at the marketplace, the center of business that fills people’s wallets. As criminality increases, legitimate enterprises grow. It’s sometimes a fight against police violence. The youths are protesting, and the streets are alive with their presence. The issues that the Lagosians must consider are tremendous.

The problems that the average person has to deal with are enormous. Every Lagosian is awoken early by the reality of these packed events, but the hot heat also helps. Many people are confused about the source of their perspiration.

Lagos, home to about 20million people has many industries. Virtually every home in the city has a generator. They burn fuels and the ozone layer tells a tale of their presence. But those companies burn nothing near what’s emitted in the Greenhouses in China and India. Vehicles on the roads are hardly any better. The exhaust of the trucks are repositories of unwanted and dangerous bellows.

The environment suffers at the hands of human decisions, but just very little of those decisions are taken in Lagos. The trouble faced by a Lagos family in the middle of a night in the dry season may be coming from the failures of China, the United States, and Russia to make a move. Their inability or lack of will to save the climate.

Less than 10% of the world’s total fossils are burnt in Africa, but the Gambia is making the most impressive moves towards quashing climate change today. Sadly, what the Gambia does changes little to nothing on the global page. The world’s powers, the United States, China, and Russia, where the majority of the depletion is enabled, can not be bothered.

In 2015, almost every country in the world agreed to limit global warming at the Paris Climate Agreement. Every country had taken a foot forward by pledging to save the climate but no country made strong moves ever since. Global Greenhouse Gas (GHG) emissions have been on the rise ever since.

What the Paris Agreement aimed to achieve was limiting the warmth of this century to less than 2 degrees Celsius. The biggest nations of the world have paid little to no attention to the target and fossils have continued to flare up to the sky, destroying comfort, a layer at a time.

World leaders said at the time that they’ll set reachable targets as they aim to meet their global climate goals but ever since not much has been seen in terms of positive strides towards ridding the world of fossils.

Between October 31 and November 2, global receipts will be tendered, and nations will see where they stand on the promises they made six years ago. Joe Biden, Xi Jinping, and hundreds of other world leaders are expected to be in the mix. But as it stands, Jinping and Vladimir Putin may not attend the meeting.

The COP26 Climate Meeting in Glasgow, Scotland will remind the world that actions are not commonplace in the much-talked-about issues of climate change.

Many countries are ramping up their plans and policies on reducing emissions ahead of COP26 but it looks like a race for showboating and showing a false sense of commitment to the rest of the world.

China and India combined are responsible for a third of the world’s total greenhouse gas emissions. With the United States, in addition, that’s more than half of the world’s total, just from three countries whose companies have pledged without action. China’s allure for coal is unrivaled in the world, with its companies belching 10billion tonnes of CO2 a year.

That’s a fifth of the world’s total carbon emission. In what however seems good news, Beijing has pledged to stop giving its backing to new coal-fueled companies abroad. The enormity of China’s coal fleet is a threat to the correction of climate change and there’s a great expectation from that end if the world will experience a fresh breath of air.

The poorer countries of the world also need great help as not much has been heard since 2015 when the rich countries of the world pledged to provide $100bn a year to help them reduce atmospheric warming to 1.5 degrees Celsius. According to the UK, only $80bn of this has been realized so far in public and private funds but all hope is not lost.

Achieving the net-zero target by 2050 also depends greatly on how important the power players of the world consider their Nationally Determined Contributions (NDCs). Many have dubbed it impossible. The smallest nations of the world have little to no effects in the overall scheme of things and some power players including China and India were yet to submit their updated NDCs.

Should the submissions of all 192 countries be considered, emissions are set to rise by 30% in the next 7 years, instead of the 45% drop agreed upon six years ago. That has taken the world many steps backward. By 2100, the world may be dealing with 2.7degrees Celsius of warming. And there’s no unity globally, as various issues including COVID-19 vaccine nationalization, the quest for clean energy, and other diplomatic kerfuffles have hit relationships.

UK Prime Minister Boris Johnson also expressed concerns at the failure to reach an agreement with many countries, telling a group of school kids that there’s “peer pressure” in the decisions taken by nations. Many are following what their diplomatic partners do and this already threatens the summit before it begins.

The reduction or elimination of plastic, deforestation, and the state of the water bodies are also other salient issues not paid great attention so far, in the biggest countries of the world. To a great degree, these are the countries the rest of the world look on to for direction.

While the local businesswoman in Lagos and her neighbor with a family of five sleep in darkness with their bodies dripping, their problem is not poverty alone. Those who hold the grand solutions to their problems are not batting an eyelid on what they feel. The oil and gas oil companies are still flaring in the Niger Delta and incongruent local environmental policies have also led to constant flooding in some parts of Nigeria.

When it rains in Lagos, it pours on the island, no thanks to the not too new but everlastingly dangerous ways of the world. The poor family in the Niger Delta also faces the same issues. His crops and fishes are dying from oil spillage and his environment is continuously degraded.

Corruption also has its ways on killing the present and endangering the future. As the smoke bellows to the sky, there is trouble just beneath it. It’s the world’s way. And the local faces the worst.