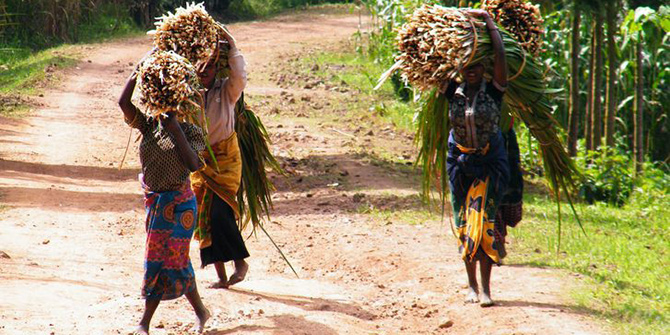 Following the 2018 LSE Africa Summit which explored the unemployment challenge on the African continent, Fadekemi Abiru explores ways of creating a labour market that works for women.

“We have many female entrepreneurs in the informal sector, the issue is enabling them. An enabling environment is key, that is the only way for the continent to absorb its educated and entrepreneurial people” – Dr Aida Opoku-Mensah from the Enrolment to Employment panel at the LSE Africa Summit 2018

According to recent research, sub-Saharan Africa has the highest female labour participation rate compared to other regions including Europe and North America. However, looking closely at the type of jobs will reveal a less rosy picture. Employment for women in African countries is characterised by low-paid and less secure jobs, so that 74% of women make up unemployment in the informal sector, compared to 61 per cent of men.

These statistics are a simple illustration of how labour markets might not always work for all.

The labour market is expected to work like any other one where buyers and sellers meet –  firms ‘buy’ workers who sell their labour. At its most basic level, it is expected that people move in and out of jobs seamlessly until workers searching and firms hiring end up perfectly matched. However, frictions exist in the real world, which means we don’t always get the matches required. For example, consider a worker in northern Nigeria who might be perfect for a job in the south but distance is in the way of this job match.

Similar types of frictions seem to be affecting women in the labour market who form most of the low-income informal economy.

Think again about the buyer and seller analogy of labour markets. If you were going to buy a product, and you had formed beliefs that a certain brand was superior to another, it will influence your purchase decision.

That is how firms buy their labour – beliefs and signals. Due to long-held views about the productivity of women in the workplace, firms in the formal sector might feel that women are unable to meet the demands of full-time employment. Cultural constraints like the ‘man-of-the-house’ model allow these beliefs to stick so that firms looking to fill job vacancies might believe the female candidate, no matter how qualified, has less time to dedicate to her job, making her unsuitable. Therefore, there is less demand for female labour here, leaving them with no choice but to be overcrowded into specific sectors, lowering wages.

The story is not complete without considering that women might be selling their labour to particular informal sector jobs. There is evidence that women have been conditioned to have different preferences for risk and competition, which could influence the jobs they sell their services to. There are both demand and supply factors at play.

Jobs in the informal sector should not be considered as an inferior form of employment, the problem is the conditions which women work under. To an extent, women in the formal sector are protected by rules that make it more costly for firms to discriminate against them. However, the informal sector is able to operate out of reach of legislation, making it easier to exploit workers there, with women feeling the worst brunt of it.

Take agriculture as a reference point. In Nigeria, women contribute between 40% to 70% of the workforce in agriculture depending on if you agree with the World Bank or African Development Bank (AfDB). In Rwanda, the figure is 77%. However, these women face limited job security and are more likely to be smallholder farmers engaged in subsistence farming. Importantly, even though there are more women in this sector, it is usually the men who are more likely to have better access to land rights and technology needed to be more productive in agribusiness.

This is a double blow for African women. First, they are allocated into jobs that are less empowering, and then they are given resources that are less productive. Even in countries like South Africa where women can legally inherit and own land, culture norms still leave women at a disadvantage. Consequently, female farmers end up producing relatively low amounts of produce on smaller plots of land.

With outdated perceptions of a woman’s role in society, African countries already do women a disservice by ignoring the productive work they do at home. The situation becomes even worse when women who manage to venture outside the home are still discriminated against and selected into jobs that are not liberating or empowering.

The distribution of jobs is a clear indication that the labour market, left to its devices, may not produce an optimum allocation. And as economists will argue, intervention is needed to correct this market failure. Lessons can be learnt from the Nordic countries, where shared responsibility and other incentives exist to make it easier for both men and women to participate as much as they want in the formal labour market.

Further, this issue would benefit from policy discussions that focus on how women can be protected in the informal sector if they choose to be employed there –  formal employment is not the only way to be empowered. Already, some African countries are beginning to pick up on this through the elimination of statutory barriers in Rwanda; and joint titling in Ethiopia. With these and more, we can build an African labour market that actually works for its women.

This article was first published on Stears Business.