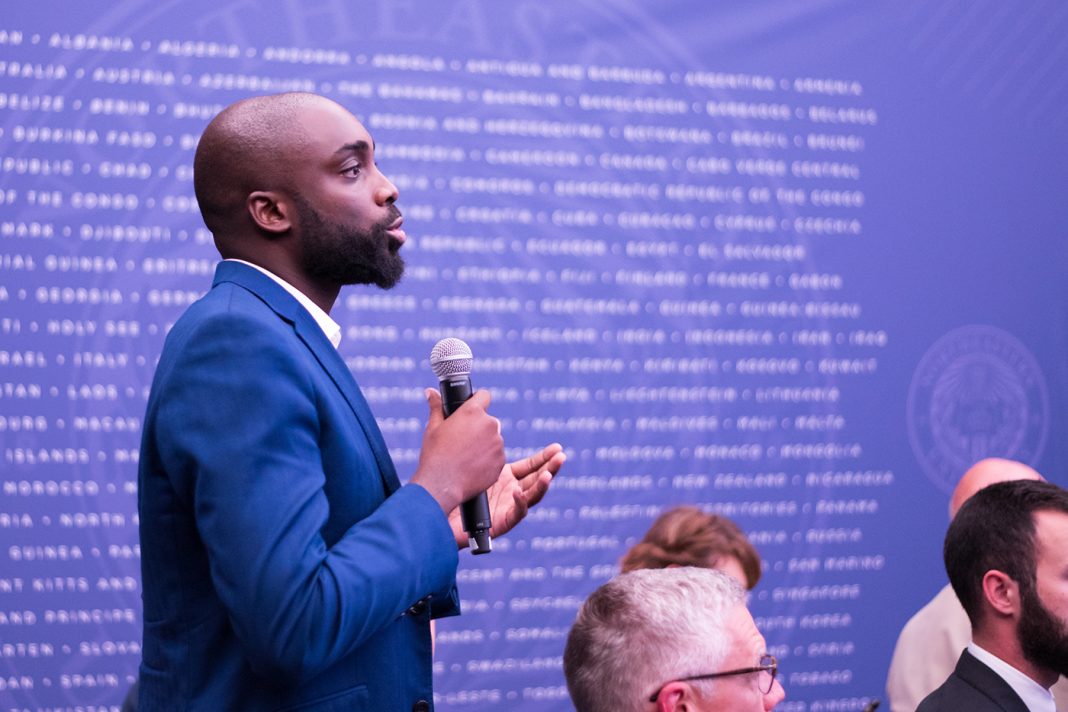 To understand Oriteme Banigo’s philosophy toward work and life, it helps to contextualize where he came from. He had a light-bulb moment in Dennis Shaughnessy’s class on social entrepreneurship at Northeastern 12 years ago, and things haven’t been the same since.

“We were taught that in whatever venture you’re doing, there’s a social impact, that there needs to be a positive impact,” he recalls.

This philosophy has driven everything Banigo does, and there’s no shortage of projects vying for his time and attention. He runs a publishing company that develops, produces, and distributes comic books promoting the history and culture of Nigeria. He also runs an entertainment company that puts on an annual beach music festival in Lagos. And he’s involved in advocacy work in his community in Lagos.

Shaughnessy’s class not only marked the beginning of these entrepreneurial pursuits for Banigo, but it left him with an invaluable lesson that harkened back to a sage piece of advice he keeps tucked in his back pocket: “My father always taught me whatever you do, you need to bring value to people; value to your family, value to your friends, value in your workplace.”

Banigo graduated from Northeastern with an economics degree at the height of the Great Recession, then moved back home to Lagos and worked at a bank for a few years in order to fulfill a Nigerian mandate that requires citizens to work in a minimum wage job in corporate, health, or education for at least a year.

“It was always the plan to move back,” Banigo says. “I thought it would have been a waste to just go and live somewhere else and not utilize my resources here in Nigeria to achieve what I wanted to achieve in terms of impact.”

The son of a Harvard-educated father, Banigo—and his siblings—were raised in Lagos but were sent by their parents to different parts of the world for preparatory school and college. He says that this experience has made him feel as if he has had to straddle dual identities his whole life.

“I lived in two worlds for the better part of my adolescence,” he says.

While working at the bank, he co-founded a publishing company called Panaramic Entertainment, the idea for which was born in Shaughnessy’s class.

In 2012, he co-founded Eclipse Live Africa, and soon thereafter, launched an annual music beach festival called the Gidi Culture Festival. The festival, which draws acts from across the African continent, attracts a loyal following of revelers, this year to the tune of 10,000. Banigo isn’t surprised by its popularity.

“Where we are from, there are not a lot of opportunities for young people to be in a safe space, and to have affordable live entertainment,” he says.

With those ventures healthy and thriving, Banigo has recently diverted his attention to philanthropic endeavors. With some friends, he developed Ventucon Partners, a venture capital company that supports budding entrepreneurs who are building companies that are working to make a positive impact on African society, such as those that are working to help provide affordable housing to students and first-time homebuyers.

He is a trustee for the Echo Foundation, a nonprofit organization that promotes music development in Nigeria, and an advisor for a real estate company that invests in affordable homes in Nigeria.

Banigo advocates on behalf of his community in Bayelsa State by serving as an intermediary in the negotiation of development agreements with oil and gas companies.

“This was a part-time job, but for me it was probably the most impactful because it was directly affecting people from where I’m from,” he says.

Banigo’s community work landed him a position as the advisor of Timipre Sylva, the former governor of Bayelsa State in southern Nigeria. Albeit unexpected, this was “a major milestone” for him, Banigo says.

“It now enables me to be on the government’s side when dealing with a lot of these oil and gas issues in my community,” he says.

Banigo has a few items remaining on his bucket list. Within the next five to 10 years, he wants to be able to help more young people in his community graduate from college by offering them scholarships to support them both inside and outside the classroom.

Another issue he is committed to solving is infant mortality, which affects one in five Nigerian children.

“Because of the lack of environmental protection, and degradation, when you have oil spills it affects the soil, it affects the water, which affects the fish and people in my community consume this fish, which is contaminated and affects mothers who are expecting,” he says. “So, how do you identify solutions to these problems?

How do we protect the community from that exposure?”

Banigo is a member of Northeastern’s Young Global Leaders program, which comprises more than 100 recent graduates who advise university leadership and help to strengthen Northeastern’s network of international alumni.