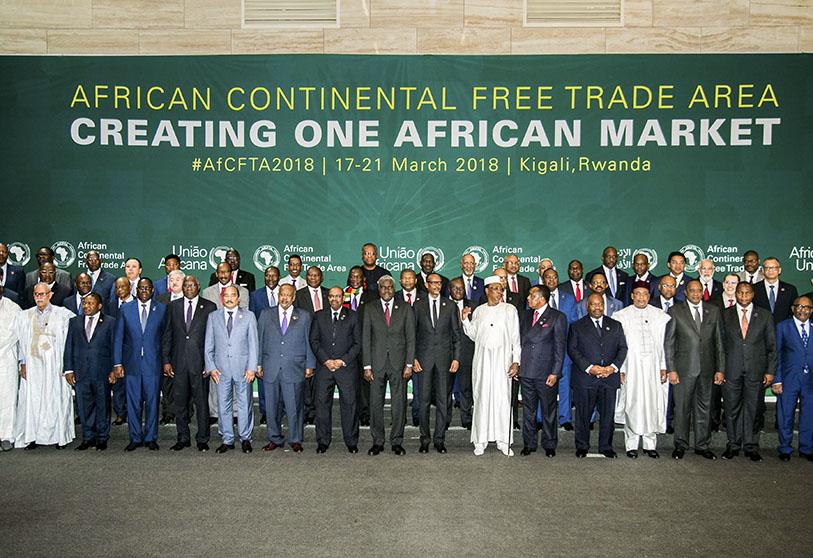 The start of trading under theAfrican Continental Free Trade Area (AfCFTA) agreementon 1 January 2021 marks the dawn of a new era in Africa’s development journey. Over time, the AfCFTA will eliminate import tariffs on 97 per cent of goods traded on the continent, as well as address non-tariff barriers.

Opening up a market of over 1.3 billion people is expected to spur more intra-African trade while increasing the appeal of direct investment in Africa for the rest of the world.

Intra-Africa trade has historically been low. In 2019, only 12 per cent of Africa’s US$560 billion worth of imports came from the continent.

African countries have also been trapped in the lower levels of the global economy by selling low-value raw materials and buying higher-value manufactured goods. This is seen as one of Africa’s major challenges for development. The free trade agreement seeks to reverse this.

The creation of a larger African middle class means more consumption, which should trigger more production and even higher incomes on both national and individual levels. The cycle is expected to continue.

Data showsthatintra-African tradecomprises a higher share of manufactured goods, and meeting domestic demand for these can better position African countries in global value chains. For this, African countries must find answers to several questions including production growth, productivity growth and reduced transport costs.

Increased production for exports cannot happen in a vacuum. The agreement attempts to solve demand issues by creating a single African market, but there are reasons that countries haven’t been able to scale up production to match the consumption of their citizens.

Understanding why Nigerian producers have been unable to meet even the local demand for cars will highlight what needs to change in the context of a single African market. The logic, however, is that a larger market will improve the business case for foreign direct investment, bringing much-needed capital and technology into Africa.

On the other hand, productivity, or being able to produce more output with fewer resources, may be a harder nut to crack. Increased productivity has been recognised as a key driver of growth. Improving productivity will require more efficient allocation of factor endowments like land, labour and capital while leveraging appropriate technologies.

The third issue is transport costs. Tariffs aren’t the only reason intra-Africa trade has been so low – non-tariff barriers like transport costs have played a significant role. Conversations around implementing the free trade agreement have recognised the need for investment in transport infrastructure to facilitate trading. Although several options are being considered, high transport costs continue to pose a threat to the pricing competitiveness of intra-African exports, especially in the cross-regional context.

A beacon of multilateral cooperation in an increasingly divided world?

There will be several other barriers to trade including the deficit in hard and soft infrastructure, certification requirements, bureaucratic red tape and rent-seeking by government officials. Amechanism has been set upfor reporting and addressing non-tariff barriers.

African countries will need to work together to find lasting solutions to these problems. More specifically, for industrial policies to work for and not against the AfCFTA, they may have to be coordinated on the continental level. Otherwise, most African countries could focus on similar goods and services, again limiting themselves to their domestic markets.

Coordinating industrial policies will also help countries or regions specialise production in specific and complementary directions. Specialisation facilitates economies of scale and productivity growth. It can also lead to lower prices and more competitive goods for both the African and global markets.

There have beenseveral attempts– both nationally and regionally – to find collective solutions to these problems. Almost all regional economic communities have created collective industrial strategies at some point. The African Union launched the implementation strategy for itsAccelerated Industrial Development of Africaplan in 2008.

Some of these attempts at supra-national cooperation and coordination have failed for several reasons including legitimacy and enforcement challenges with regional bodies, and insufficient political will from national governments.

From the independence to the post-independence period, leaders like Ghana’s Kwame Nkrumah laid out a vision of unity and cooperation for Africa. With 54 signatories and 36 ratifications, the speed at which African leaders havemoved on the AfCFTAmay signal a new level of commitment to these ideals.

Cooperation has its difficulties, as shown by the decline of multilateralism. African leaders must navigate the path to collective development with sufficient wariness for these issues. The ubuntu philosophy captures the famous African collectivist idea that is often proudly contrasted with the Western individualist version.

Africa could become a beacon of multilateral cooperation in an increasingly divided world. Will the AfCFTA lay the foundation for African advancement? Or will it be a precursor to the premature unravelling of African unity and cooperation? We’ll soon find out.

This article was originally published by the Institute for Security Studies.

Teniola Tayo is a Research Officer with the Lake Chad Basin Programme at the Institute for Security Studies in Dakar, Senegal