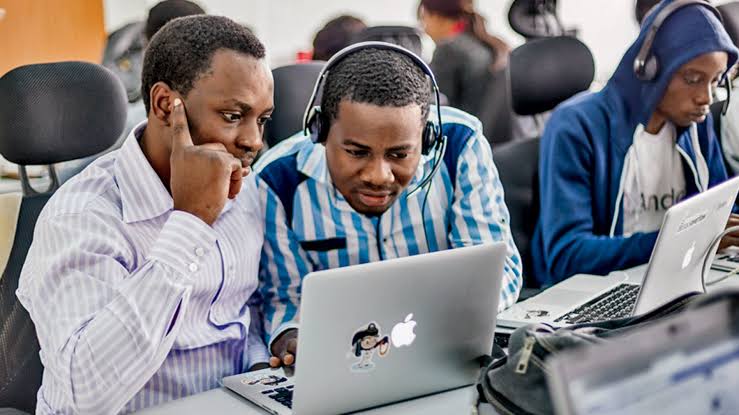 It’s been seven years since a team of six co-founders went on a mission to develop Andela, the world’s first global tech talent marketplace and a leader in connecting brilliant young Africans with global opportunities.

The co-founders started out with one office in Lagos, Nigeria scaling to Kenya, Rwanda, Ghana, and then Egypt and they have since successfully scaled their operations to attract talent from over 90 countries. Andela recently gained unicorn status after a $200 million Series E funding round that involved a pool of investors led by SoftBank.

Andela CEO Jeremy Johnson told The Org, Lagos was the initial priority market due to young Nigerians having a growing interest in software development and how data showed this growth was on an upward trajectory. The company ran its first test pilot without a website and was looking to hire six prospective software developers that Andela could train and place in organizations, but it ended up with 700 applicants.

Andela introduced an aptitude test in the second pilot to narrow down the number of applicants, but still attracted 2,400 — largely through Twitter and Nairaland. Of those 2,400 applicants, 42 were amongst the top 2% of good problem solvers on the planet, according to the company that helped Andela with the aptitude tests.

“We were seen as a bridge for these young talented individuals into the global technology ecosystem, where they could learn from the best engineers in the world of how software is built-in tech hubs like New York and Silicon Valley,” Johnson said.

Andela trained aspiring developers through a six-month fellowship which offered a stipend, but it has since done away with that and is now offering an online training solution called the Andela Learning Community. The new program is run in partnership with Microsoft and Google and it has been a great talent development mechanism, bringing over 100,000 young people into the tech ecosystem.

Initially, Johnson’s assumption was that they were going to have challenges sourcing gifted individuals. The challenge instead was convincing engineering managers around the world to give a chance to people who did not have a resume like those of people they were used to hiring. What helped Johnson was that 2U, the ed-tech company he’d co-founded, had just done an IPO that provided him with a good network in the tech ecosystem in the U.S. He reached out to give their Andela developers a shot, and once those networks tried the model they served as great reference points and were a powerful tool for word of mouth.

“It was a matter of having those engineering managers wake up to the fact that one of the best software engineers in their teams was a young man from Togo or a young lady from Kenya,” Johnson said.

“At that point, our key theory of change was to help the companies we were serving to see something they had never experienced before, that race, gender, and nationality have nothing to do with brilliance.”

The benefit of scale brought by COVID-19

The pandemic brought several opportunities for Andela to scale on both sides of the marketplace due to the growing adoption of working remotely. “On the talent side we have seen a 5x increase of applicants to Andela over the past year and engineering leaders are waking up to the fact that people can be remote and are able to work in real-time and communicate,” Johnson said.

Andela focuses on being a conduit that accelerates the careers of software engineers by not only focusing on their tech skills but also on soft skills and building enduring careers. Through this, they have been able to match individuals who can become great culture fits to companies and have had a 96% placement rate.

The issue of promoting gender diversity in the tech sector has been a priority at Andela and the company has several initiatives in place to articulate how software development is an equal opportunity field and an effective career track for both men and women. It began hosting all-female boot camps in the first 4-5 months of operation because the co-founders believed that the success of the tech industry was predicated on having value being created through diversity and balance in the field.

Promoting mental wellbeing has also been a priority at Andela, and the company leaders acknowledge how remote work has the propensity to trigger work/life imbalance. “We care deeply about the success of the engineers that are placed through Andela and have provided things such as subscriptions to the Calm app, access to coaching, and events about burnout and mental health,” Johnson said.

Having raised $200 million, Andela now holds a $1.5 billion valuation. “The aim of this funding is to enable us to continue to invest in products that simplify the journey for both the hiring managers and engineers. We want to make global hiring to be as easy as pushing a button. This investment will allow us to maintain our position as the world’s first global talent marketplace and the world leader in connecting brilliance with opportunity,” Johnson said.

Andela is now experimenting with branching out into career segments beyond software development, into fields such as data science, salesforce development and cloud engineering. Johnson said the team saw a lot of opportunity in being able to provide Fortune 500 companies with talent in a multitude of areas when building digital products.

Having built a company that has a wide footprint on the continent it’s very clear, according to Johnson, that the future of tech is going to be written in Africa. He believes that great technology can be built if there is great human capital. “Most of the team that built Amazon Web Services was based in South Africa and you have thriving tech ecosystems across several regions in Africa,” he said.

“Andela is giving people an opportunity to earn commensurate with their peers in other parts of the world – which is what you want, to make the world be more equitable and prosperous.”

Johnson’s aspiration is for Andela to be a generation-defining company that is changing how the world thinks about work and building teams. As the future of work changes, Andela wants to be a beacon of how great teams can be built remotely and how they can be just as effective as localized teams. They see themselves evolving into a pre-eminent marketplace primarily for software developers and other tech talents from across the globe.

“What sets us apart is our strong culture of learning. We believe that you can learn and evolve, to be successful as a company. That culture of learning needs to permeate the company and it’s been one of the critical components of Andela´s success.”