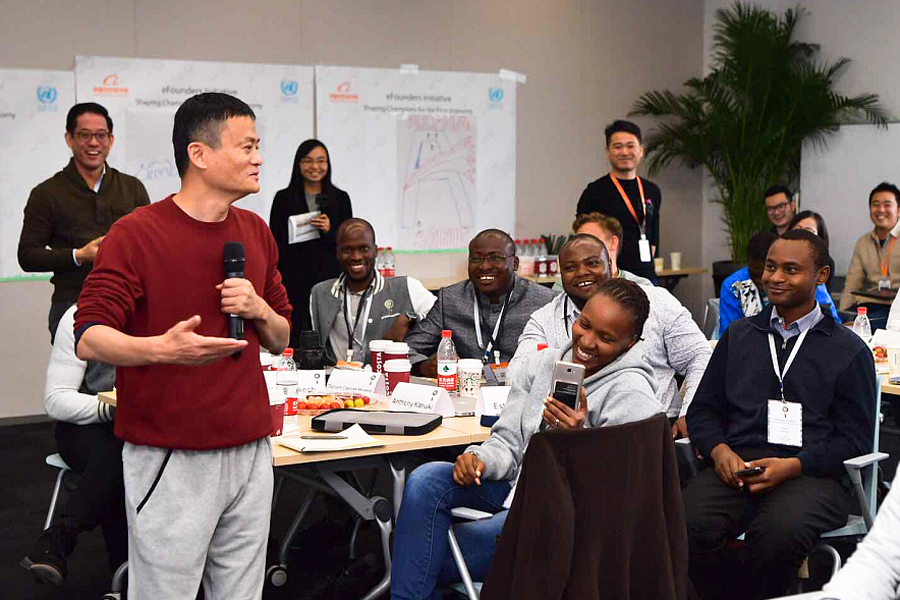 Back in July 2017, Chinese e-commerce billionaire Jack Ma made his first-ever trip to Africa. Visiting Kenya and Rwanda, Ma came away with the view that the Africa of 2017 was “the China of 20 years ago.” His actions since then suggest that he remains of the same opinion.

Indeed, when Ma disappeared from public view for several months following the last-minute withdrawal in November of regulatory approval for the listing of the Ant Group — an affiliate of Ma’s Alibaba Group Holding — the first public event that he canceled was one set to take place in Africa.

So, what might Ma’s regulatory reckoning mean for his farsighted and rapidly intensifying ties with Africa, as well as the long-term future of China-Africa relations?

Firstly, why does Ma view Africa today as China of 20 years ago? Around the turn of the century, China had a large, relatively young, low-income population, alongside poorly developed infrastructure in the retail, logistics and banking sectors.

Two decades later, however, the number of internet users in China has increased from 8.8 million to 850 million, per capita incomes have risen from $800 to some $9,000, and China’s annual e-commerce market sales reached $1 trillion. E-commerce revenues in rural China, long China’s poorest areas, have reached almost $100 billion.

According to Ma, Africa’s 54 countries and their youthful populations could, via deeper integration of digital technologies, continue their path toward becoming the world’s next growth frontier.

It was not because East Africa is closer to China than West Africa that Ma chose to make his African debut in Kenya. A sophisticated e-commerce market, Kenya is home to several established e-commerce platforms of its own, including M-Pesa, M-Shwari and M-Kop.

If all of Africa’s 54 countries can overcome physical infrastructure barriers to trade, including transport for distribution, and telecommunications for transacting and communicating, then the entire continent — as Ma himself has noted — may even be able to advance more quickly than China has thanks to the absence of a dominant state or private-sector financial system to face down.

This is what Ma was referring to in his now-infamous speech to a Shanghai financial forum in October when he compared China’s mostly state-banking system with pawnshops, and which is considered the reason behind the decision to halt the Ant Financial listing.

Nonetheless, as is already the case — in Kenya especially — there remains the need for a continuously adaptive and well-informed regulatory environment that serves consumers and entrepreneurs alike.

Ant Financial itself has established partnerships in Africa, most prominently with the United Nations Economic Commission for Africa. Given Ant Financial’s success in China at making finance far more inclusive — available to the otherwise unbanked — UNECA has been open about pushing African countries to work with Ant with the goal of bringing about equally dramatic social, financial and political inclusion right across the continent.

In parallel, and beyond their success in parts of South Asia and Southeast Asia, Ant Financial executives have expressed their determination to succeed in Africa also. These efforts, however, may be stalled by having less capital available due to the delay to the Ant IPO, as well as Ma’s presumably temporary absence from the public stage.

Ma’s interests in Africa stretch well beyond Ant Financial. After his 2017 visit, the Jack Ma Foundation launched the Africa Netpreneur Prize that offers selected innovative African tech startups access to a prize pool of up to $1.5 million, with the aim of accelerating Africa’s own digital transformation.

Less prominent, but perhaps more important, is the emerging role of Ma’s electronic World Trade Platform, or eWTP. Founded in Hangzhou, alongside Alibaba’s headquarters, the aim of the eWTP is to improve the policy and business environment for small and medium-sized businesses to participate in cross-border electronic trade. With hubs in Rwanda and Ethiopia, the eWTP not only offers access to Alibaba’s online sales networks, but also training and trade-related finance services too. The seeds, in other words, of a bigger Ant Financial-type revolution.

COVID-19, moreover, has since proven the eWTP’s distributional capabilities, having managed to carry donations to every country in Africa in 2020. It was also via eWTP that Rwanda’s coffee farmers, for example, were able to continue selling coffee beans internationally, despite the vast shutdown of global supply chains and trade links.

No wonder that when Ma disappeared from public view, African social media was abuzz with the same shock and concern as elsewhere. If Ma’s empire can continue to grow and foster transformation in Africa beyond the shock Ant IPO withdrawal, and without needing him to play a dominant role, this may even strengthen his company’s long-run investments and interest in African fintech.

On the other hand, if Ma’s regulatory reckoning comes to be seen as a fearsome and unwarranted state-intervention with opaque Chinese characteristics, this may end up harming trust in Alibaba products and services in Africa and beyond. And that in turn, could harm the bigger and more important story of China’s long-term interests in Africa at large.

Dr. Lauren A. Johnston is a research associate, China Institute, SOAS, University of London. She is the founder and managing director of New South Economics.