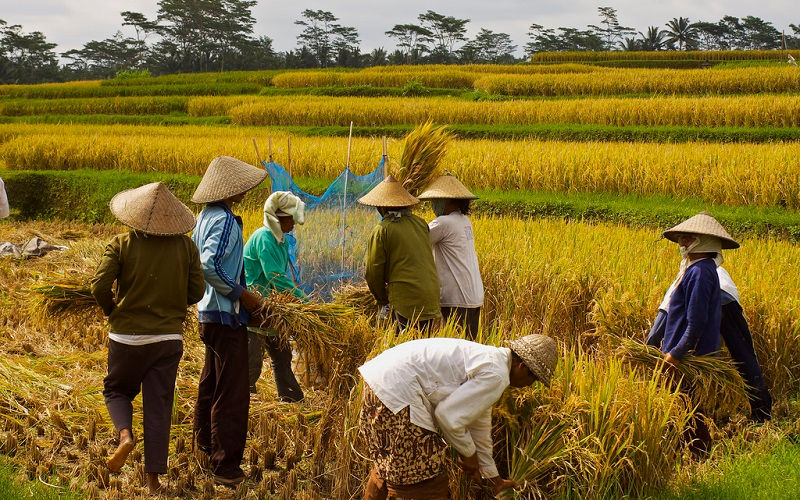 Okey Ikenna, 28, teases a grain of rice with his fingers from a bowl in his grocery store in Lagos. The grain is a blend of milk-white and scanty black seeds in a bag embossed with flower patterns.

It’s part of a new economic design that Nigeria is molding. Since the oil boom of the 1970s, Nigeria hasbuilt its economy around crude, which contributes 90 percent of the nation’s external earnings and 70 percent of its total revenues. In the process, Africa’s largest economy neglected agribusiness and domestic food production, even as its population soared. By 2015, only 30 percent of the 7 million metric tonnes of rice — the country’s staple food grain — consumed in Nigeria was produced locally, the rest imported. But the serial shocks the country’s economy has suffered because of fluctuations in global oil prices are now forcing a rethink.

Meanwhile, the Central Bank of Nigeria won’t facilitate foreign currency transactions for imported foods, including rice. And to cement that move, Nigeria’s land borders with her West African neighbors have been closed to reduce smuggling. Since 2015, the government has offered loans to small-scale farmers. It is partnering with the World Bank to introduce jingles and programs on the radio to help rural farmers relearn their approach to the use of different seed varieties, pest control, fertilizers and chemicals, while also educating them about climate change.

These steps are encouraging local rice brands to take off like never before. New brands such as Mama Choice, Mama Pride and Pure Nigeria have just emerged over the past year.

“In the past, there was no way most of the rice in my shop would have been made in Nigeria,” says Ikenna, tapping bags of local rice stacked on a wooden threshold. “But it’s happening.”

The results are showing up quickly. The Rice Farmers Association of Nigeria (RIFAN), estimates that Nigeria’s annual rice production has risen to 8 million metric tons, and at current growth rates could reach 18 million metric tonnes by 2023, which would allow significant exports after feeding the country’s 190 million people. By reducing Nigeria’s dependence on crude, the crop would fortify the economy against shocks in the global oil market, drive economic diversification, improve food security and create new jobs.

Changing a giant nation’s approach to its economy isn’t easy. For decades,Nigeria ploughed crude oil revenueinto food imports even as domestic food production declined. Young people moved away from farms to instead take up small-paying jobs in cities. Smallholder farmers relied heavily on family labor and crude tools. In most cases, they produced just enough to feed their families. “Farming rice was torture in the past,” says Onyeneke Okorie, a rice farmer based in Nigeria’s southeastern state of Enugu. “It scared people.”

Local brands sold poorly because imported rice was cheaper, as well as better processed and packaged. Then there was a mentality crisis. “People loved anything foreign – not for genuine reasons,” says Omolehin Raphael, professor of agriculture at Federal University Oye-Ekiti. “They believed it was better.”

The efforts at reversing Nigeria’s apathy toward local production have been anchored in making agriculture attractive for young people and major investors who can help ensure that both the quantity and quality of domestically grown rice improve. “The agri-food sector in Nigeria as a whole is expanding,” says Kwaw Andam, Nigeria Program Leader and research fellow with the International Food Policy Research Institute. He links recent progress to “government protection of domestic production.”

For sure, there is still much to learn from global competitors, says Andam, before Nigeria can fully realize “a thriving, competitive domestic rice sector.” Nigeria has arable land, irrigation opportunities and a pool of youth. But there’s more to do. “The countries that have become competitive – mainly Asian countries –invested heavily in research and development and infrastructure.”

The effectiveness of some of the government’s measures is also unclear. Figures from the Thai Rice Exporters Association shows that Nigeria’s rice imports from Thailand fell by 95 percent, from 644,131 tons in September 2015 to around 23,000 tons in September 2017. Thailand is the world’s second-largest rice producer and was Nigeria’s biggest source of imported rice. Yet at the same time, Benin’s rice imports from Thailand doubled in this period, leading to suspicions that smugglers were using the small country to illegally bring the grain into Nigeria, despite border restrictions. And the 2015 loan scheme has failed in several parts of the country, with the government unable to recoup large amounts.

Still, there’s a shift for the better that’s finally turning Nigerian rice farming into an attractive profession, says Okorie. “We now can compete with imported rice,” he says.

Orji Sunday is a freelance journalist based in Nigeria. His work focuses on development, climate change, security, and politics in Africa.