Home Interviews It is time for wind in Africa! 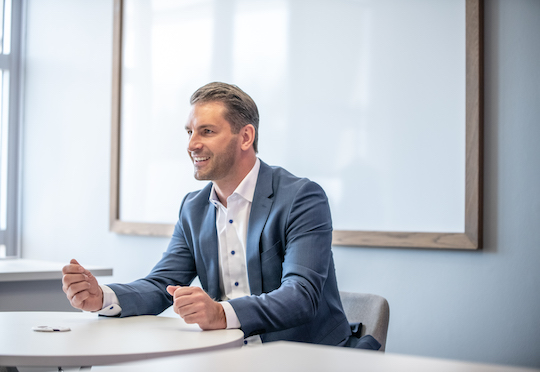 You offer a wide range of products across the energy value chain in Africa. Tell us about this.

Siemens Gamesa has been pioneering wind energy onshore projects in Africa for 33 years. Installations total 4 GW in countries such as Egypt, South Africa, and Morocco, where we have offices and a blade factory, as well as in Kenya, Mauritania, Mauritius, Tunisia, and Algeria representing more than 50% market share in Africa. Moreover, we have two projects under construction in Ethiopia and Djibouti. Many of our projects are delivered under EPC (Engineering, Procurement, and Construction) scheme.

Having installed 117 GW worldwide, we are today 26,000 colleagues working at the centre of the global energy revolution to tackle the most significant challenge of our generation: the climate crisis. The company has a leading position in onshore and offshore wind market as well as in service for wind turbines. We drive at being a global business with local impact, aiming to create local content wherever and whenever possible in strong partnership with our customers.

One of your key areas of focus has also been wind power which provides a relatively secure and affordable source of energy and helps to tackle climate change. Do you think it’s time Africa, especially countries like South Africa took this direction?

Absolutely. It is time for wind in Africa!  While the continent is only contributing to 3% of greenhouse gas emissions, it is the most vulnerable one to climate change, having been hit hard over the past few years with floods, heatwaves, and droughts sweeping through several countries. Today, wind is one of the most competitive energy sources which makes it financially really attractive for Africa which is the richest continent in terms of renewable sources like wind and solar. There is no reason why we should not take advantage of our geographical conditions and become less dependent if not at all on imports of resources.

Today, we are happy to see the positive evolution in South Africa thanks to the Integrated Resource Plan giving renewable energy a leading role in the electricity supply mix. Further, the country has been granted $8.5 billion at COP26 to lessen the country’s dependency on coal, whereas the topic of climate justice was on everybody’s mind at the summit.  While the energy transition is at the doorstep of South Africa, we are happy to continue supporting the wind energy revolution in the country.

You have already installed large onshore wind farm projects in South Africa including 109 units of onshore wind turbines. Talk to us about these projects.

Since 2014, we have installed in the country 8 projects totalling 855 MW, which we are also maintaining and representing 35% market share of the local wind industry.

We are particularly proud to have commissioned two wind farms during the pandemic: the 110 MW Perdekraal and the 140 MW Kangnas wind farms, located in the Western and Northern Cape respectively. We completed these ahead of schedule just before the lockdown. Their commercial operation was possible thanks to the flexibility, the additional trainings, and the major efforts our team on the ground incorporated once the pandemic started.

We are driven by an approach of inclusion to generate a positive relationship between communities. We target to build up a South African supplier base for components and services required for the installation and maintenance of the wind farms. For example, components such as towers, cables, structural components for towers and foundations, fluids such as oil and other lubricants, transportation, and workforce have been localized nearly to 100%.

What other projects are you currently working on in South Africa or even across the continent?

Obviously, we are very much looking forward to being part of South Africa’s new chapter of green energy revolution now that the preferred bidders of the Renewable Energy Independent Power Producer Procurement Program (REIPPP) bid window 5 have been announced, including 1 600 MW from onshore wind. Also, the private PPA market up to 100 MW is taking off which is very exciting for us. We are also welcoming opportunities where we could help South Africa to achieve its ambitious renewable energy objectives by bracing a sustainable Green Hydrogen Economy (GHE) in line with COP26 goals.

In Africa, we are already present in 11 countries, however, the continent offers other markets with strong potential resources in wind power. Wind energy can play an important role in powering Africa’s growth, including job creation and industrial expansion, which is why, as a market leader, we are keen on marking our footprint further with the aim to help the continent accelerate its clean energy transition and stimulate economic growth in a sustainable manner.

At Windaba 2021, it was revealed that the industry has matured to the point that it is ready and able to build an additional 14.4GW of wind power capacity over the next decade. Will this be enough to overcome the current energy deficit in South Africa?

The national electrification rate in South Africa was around 85% in 2019. To close the gap, we will need the right energy mix and most of all a sustainable and predictable policy framework to accelerate the electrification of the country to 100%. Land permits, grid stability, and bankable renewable energy projects are conditions to move forward.

In South Africa, we see ourselves as a South African company and are here to stay. We hope for great economic growth over the next decade and beyond and see the just transition to renewable energy as a big contribution to this growth. We hope and believe that the 14.4 GW will be outperformed by far.

What is SGRE doing to ensure we overcome this energy deficit?

We are working closely with different private and public stakeholders to help define the right policy frameworks to accelerate the energy transition to overcome this energy deficit as soon as possible. As Managing Director of SGRE, I play an active role as a board member of the South African Wind Association. This is a crucial body where all the wind industry leaders come together to act in South Africa for South Africa’s just and green energy revolution.

Moreover, I am involved in SAREM, the South African Renewable Energy Masterplan which has been launched by the Department of Mineral Resources and Energy (DMRE) with the vision to utilize the energy transition in South Africa for economic revival through the industrialization of the renewable energy value chain, creating jobs and to enable inclusive participation of the South African society as this is where the music plays: only with a sound public-private partnership approach collecting the accurate instruments, can we set the right tone.  I am convinced that soon the true symphony will come into place to perform a greater concert that will rock the show.

The wind industry has come a long way since the launch of the South African government’s REI4P and the first bidding window in 2012. What does the future look like? What are the hits and misses?

The future looks bright, considering the integrated resource plan (which may need an update) as well as the private PPA market and as a first step continuing the success story of the industry with the preferred bidders’ announcement of REIPPP bid window 5, South Africa will receive more than 2.6 GW of clean energy in the next two years. This is a huge step forward but what is even more important is the change of mindset that has happened.

The country has understood that the energy transition is a must and that it is not only possible to make it happen in a just and inclusive way, but that we could even surpass the number of jobs we have currently in the coal industry when putting the right measures in place. And here comes the crucial point:  to build and sustain local value chains, an uninterrupted industry and demand is a must, as it will encourage investments and enable continuous component manufacturing. If this is not given, at least local manufacturing of major components would economically not make sense.

Governments indeed play a conditional role, as, without their willingness to put the right levers in place to attract investors, the green energy transition cannot take place.

To name only two main levers: on one hand, governments need to create a stable momentum of continuous and regular capacity procurement through a policy framework backed by a strong long-term political commitment. This means systematic, reliable, and predictable auctions and keeping to the schedule will help attract sustainable investment, encourage local value chains, and support socio-economic development. Legal frameworks need to be reinforced to ensure that contracts are respected and minimize off-take risks such as curtailments at a later stage.

On the other hand, the grid capacity and transmission infrastructure need to be improved. In South Africa for example, we need an increased transmission capacity in high potential renewable energy areas, particularly in the Northern and Western Cape, and ensure long-term, transparent, and realistic grid-capacity planning to improve infrastructure and provide investor confidence.

I think it is crucial to strengthen the dialogue between the wind industry and the government to help formulate more effective policies and ensure the successful implementation of South Africa’s renewable energy targets and broader climate objectives.

Siemens Gamesa will for sure continue being committed to South Africa and its long-term partners involved in making real what matters in the country, for generations to come, with the power of wind.

We Aspire To Build A Google That’s Helpful