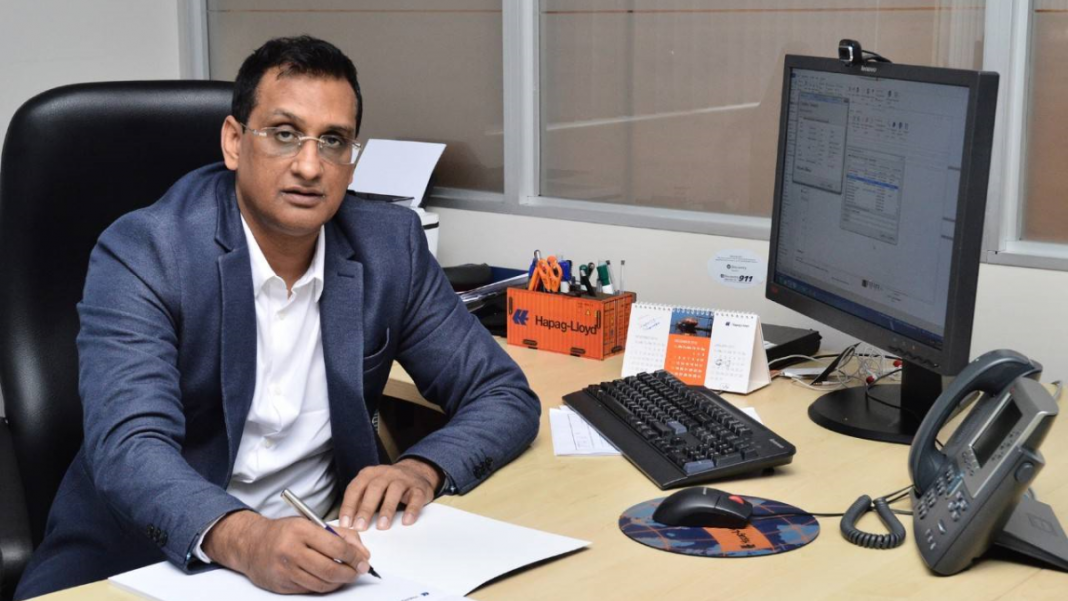 Hapag-Lloyd, the German-based multinational transportation company, has a big appetite for Africa. The continent is important in many ways to the world’s fifth largest

shipping line, including the fact that the region forms an integral part of its growth strategy.

With Africa’s growing economy and huge potentials, Hapag-Lloyd’s overarching objective is to take advantage of the looming economic developments. Through various ambitious public and private infrastructural project aimed at increasing industrialization, billions are already being invested in railway lines from East –West Africa, through Ethiopia to the port city of Djibouti. Sea ports across the continent are also being revamped and expanded to enable the industrialization initiative. The newly created African Continental Free Trade Area, one of the largest free trade zones in the world, is another interventionist policy decision in the direction of stimulating Intra-African business growth.

In addition to its current status as the world’s fifth largest shipping line, Hapag-Lloyd is Germany’s largest ocean liner shipping company. The company was formed in 1970 when Hamburg-Amerikanische Packetfahrt-Actien-Gesellschaft (Hapag), which was founded in 1847 and Norddeutscher Lloyd (NDL) merged. Hapag-Lloyd has a rich history of over 170 years, and unlike some of its major competitors who have diversified into non-shipping activities, Hapag-Lloyd continues deriving the majority of its revenues from deep sea liner shipping business which remains at the centre of the company’s strategy.

Hapag-Lloyd’s shipping operations are sailed through its fleet of 219 modern container ships and a total transport capacity of 1.6 million TEU. After more than a decade of doing business in Africa, Hapag-Lloyd is keener than ever to deliver its expertise to take on the opportunities of Africa’s formidable shipping industry whilst tackling the inherent challenges. These challenges are familiar to Osman Samad, who in March 2015 was named Hapag-Lloyd’s Managing Director for Africa. Since taking the job, Samad has actively steered the company’s growth plan for the Africa area with clear performance objectives and greater accountability. The agenda is succeeding —Hapag-Lloyd now has industry-leading profitability, and has fared remarkably well in Africa’s difficult shipping terrain.

What some of the positive economic developments that Hapag-Lloyd has benefited from since it commenced operations in the region?

Hapag Lloyd has been in shipping for 170 years but in Africa for only 11 years and this explains it all. As the top 5 shipping line in the world, it is very clear we have some catching up to do and this is what we will attempt to do in the future. The various ports upgrade and developments in Africa to reduce congestion are very good, however all players also need the landside logistics and congestions to be fixed. The boost in the agricultural products (also with our reefer expertise) has been in general very positive for us to differentiate ourselves.

How important is it for Hapag Lloyd to be diversified across different markets in the region?

Well each market is different and has its own complexities and challenges as well as rules and regulations. Hapag Lloyd will be compliant and ensure it also respond to local needs.

What was the rationale in choosing Ghana as the location for your newly established West Africa office?

Ghana is politically and legally stable and business friendly with its very sound English written and spoken by general public. It also have a strong regional setup which offers springboard into Africa and access to a market of 350 million inhabitants. More importantly, Ghana is already a base for many multinationals as regional offices in West Africa

What is the volume of importation through Ghana ports?

Ghana market offers roughly around 450,000 teus import and 150,000 teus export as a country and that has been growing by approximately 5-8 % year on year.

Generally for Africa, mining is still very important but for the West Africa market, agriculture continues to play a big role with the main export being cocoa beans. The volumes have also increased year on year but is also dependent on seasons.

How has your operation in West and East Africa enabled you to tie the region more closely to your global network?

We are connecting our main services via Tangiers which is our hub port to connect to all major markets, be it Far East, North America, Latin America, Gulf Countries and Europe.

There are issues around port infrastructure, port congestion, turnaround time in Africa. How do they impact you and your business?

These issues have implications that impacts costs, either through the consumers paying a higher price for imported goods as a result of these inefficiencies or as a result of the competitiveness of our African products vs other markets. It is also very important that stakeholders in the sector work towards curbing congestion and landside logistics for the common good of Africa. As a shipping line, a delay in one port affects the other and it becomes a cycle where one is not able to have a good schedule reliability. For example, exporters of fruits in West Africa are heavily impacted as their supply chain demand advanced supply chain planning from harvesting of bananas to transportation and ultimately shipping. Agri- products do have limited shelf life time cycle and we should not forget this.

What are your strategies for improving and evolving your shipping operations?

Given that the internet penetration and quality in Africa is increasingly, we are offering more convenient products through which customers can operate with us comfortably from their offices, home or even on the go via more EDI services without a real need to necessarily physically come for documents, information and payment. Technology will play a big part in the future, with our staff also being trained to educate our clientele accordingly.

How do you feel about the government’s initiatives in the ports, shipping, and logistics sector?

I think the authorities are aware of the situation and the impact of congestion and inefficiencies in the supply chain and so they are working on them but at the pace of each country. I wish it could be much faster because the target should be about removing the unnecessary costs to be competitive. Ports in various part of the region must be competitive enough to meet international benchmark. Ultimately for example, when talking about transshipment hub, the competitions are with other non-African ports like Tangiers and Algeciras.

How concerned are you about the outlook for the region?

I am not concerned – am very optimistic about Africa (and coming from Mauritius, who plays a big role in SADC and Comesa, am proudly African). We just need to get better at quality and compliance.

What are your thoughts on the recently established African Continental Free Trade?

I think it’s a great move but the small challenge is that the two largest economies in Africa – South Africa and Nigeria – have not signed the full agreement because they are asking for more time for internal country consultation, which is a bit of the flip side of the coin. Despite this challenge, it’s a big achievement and potentially important for Africa’s globalization process. Free trade is the future and it is good that all African leadership are encouraging free trade in region.

What growth potential does free trade pact represent for region?

First of all, this should stimulate industrialization with regional blocks coming together. Industrialization in Africa remains an issue today because many businesses are still very country-based. Intra-African business and volumes (which are already growing faster as trade lanes) would grow immensely once this is implemented.

With Africa’s enormous potentials, why is the region so underestimated?

Underestimating Africa is nothing new (unfortunately). Negative ideas about the “dark continent” already existed, especially in Europe, when the author Joseph Conrad set out on his journey there in colonial times at the end of the 19th century. His voyage took him into the “Heart of Darkness”, the name of the world-famous novel which he later wrote. Even today, many people primarily associate Africa with a lack of prospects – with refugees, for example, who risk the life-threatening journey across the Mediterranean Sea in overcrowded boats. Despite all the challenges that people still face in Africa today, the Sub-Saharan countries in particular have immense economic potential. Africa is thus regarded as the continent of the future – for a number of reasons.

How would you define Hapag Lloyd’s culture?

Consistency and Reliability despite all the challenges we face; else a company like this would not have survived troubled waters for over 170 years.

How do you maintain this culture as the company moves into the future? Constant training and education of our own staffs, our vendors and customers so that we can all move together towards the same goals.