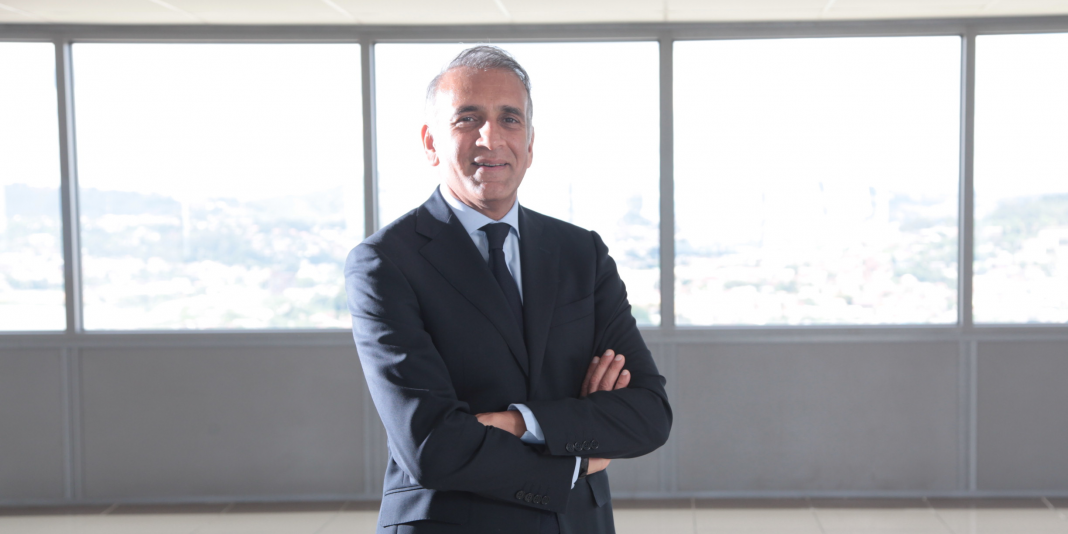 Ylias Akbaraly is the wealthiest man in Madagascar. He is the current successor and leader

of the Sipromad empire founded by his great grandfather in 1918. From a small family trading business, Sipromad Group is one of the leading multi-.million dollar conglomerate in African and the Indian Ocean with interests spanning Business Aviation, Agri-Business, Tourism, Manufacturing, Energy, Technology and Real-estate, Pharmaceutical and Banking. The story of the founding of the Sipromad is a long and interesting one. Akbaraly’s great grandfather, Merally Manjee, was an adventurer with origins in Gujarat, a state in Western India.

The Gujaratis are widely known as the world’s best business people and a trait common with them is that they are never put off by factors such as distance or temperature. Business is their principal business and they can be found managing businesses ranging from corner shops to hotels, from tech start-ups to some of the world’s largest conglomerates. Like the Lebanese and Chinese, the Gujaratis form an impressive global commercial network with substantial influence on some of the world’s most advanced economies.

One other thing the Gujaratis are noted for is their economic migrations flows. A critical case in point in this regard is Merally Manjee, who trudged on Sea for a period of three months, arriving at Belo Sir Tsirbihina, a village on the west coast of Madagascar, where he founded a small commodities trading company that eventually became one of the most successful businesses in the northern province of Madagascar. Flush with success, Merally passed the business on to his son, Akbaraly Merally, who in turn took business to another level. The next in line of successors to the carry the legacy was Sermamod Akbaraly, the grand-son of Merally Manjee. Sermamod, it was, who built upon the success of the business, rechristened it to Sipromad Group in 1972 and stretched it to the bustling Malagasy Capital, Antananarivo.

Before long, Sipromad Group became known, throughout Madagascar, for its diversified business interests. During this period, Sermamod’s son, Ylias had completed studies at the University of California, Berkeley where he graduated with a Master’s degree in Management and Marketing. After a brief working stint in the United States, Ylias was forced to return home to take over the business. Upon return, in 1991 and within a space of 20 years, he successfully turned the company around, making it one of the most successful companies in Madagascar and in the Indian Ocean. Under his leadership, the group grew from 20 to over 3,000 staff with representative offices in Mauritius, Morocco, Seychelles, Mali and Paris. With an imposing 33 –story headquarter building known as the Orange Telecommunication Tower, Sipromad Group enjoys the high prestige of owning Madagascar’s tallest building widely popularly as the “Pride of the nation”.

With a fortune estimated at $800 million, Forbes ranked Ylias Akbaraly as the fifth wealthiest person in Francophone Africa. Through the business activities of Sipromad Group , his ultimate vision is to make Madagascar the pride of the Indian Ocean and Africa.

In 1918 Sipromad was founded — 100 years later, it has grown to become a $350 million (annual revenues) multinational conglomerate. What are the biggest lessons so far? What’s changed in those 100 years?

The growth of the company is as a result our ability to respond to several evolving circumstances. Our operational principles have always been based on perseverance, vision, and pragmatism. To this day, those principles remain our strength. In the years since its founding, what has changed most significantly is the way we have evolved with Madagascar’s industrialization of the 1970s which necessitated conglomerates like ours to support the government’s effort of economic development through job creation. So , in order to maximize the value of Madagascar’s national output, the company was renamed Sipromad Group in 1972 to reflect the diversification of our business interests across the several sectors in which we are now major players in the region.

Madagascar has been roundly described as the potential tiger of Indian Ocean. What are your thoughts here?

Madagascar has always positioned itself as the potential Tiger of the Indian Ocean with huge opportunities for foreign investors. Yes, of course, Madagascar can be the Tiger of the Indian Ocean and the reasons are very simple. First, our location (right in between Asia and Africa), is a very strategic one. Second, we are the biggest country in the Indian Ocean and third, we have a young and vibrant population that is well educated. However, I think the government of my country should look into simplifying regulations that will make it easier for entrepreneurs and foreign investors. I would also like to use this opportunity to mention that Madagascar has huge investment opportunities in mining, renewable energies, tourism and agribusiness sectors.

Access to electricity remains a major challenging in Madagascar, yet in a country steeped in infrastructural deficits, you were able to turn around the fortunes of your family business into a multi-million dollar conglomerate. As the chairman of Madagascar’s largest privately owned company , how have you tackled these challenges?

We are investing in hydropower. The first one is already in operation. We will start a second one for 30MW capacity soon. And then, we will launch a third one for larger capacity. We are also thinking of diversifying into solar power as well; the reason being that we have sun almost all year around. Solar energy is an ideal solution – as it is available round the year, cost effective and with potential accessibility to the population.

As the world’s fourth largest island, Madagascar is known to have an impressive array of biodiversity, natural beauty and cultural resources to support tourism. To what extent has Madagascar highlighted opportunities to strengthen its tourism sectors through regional integration initiatives?

Well, I think we need to first and foremost invest in infrastructure and connectivity because tourism is one of the most important sectors that can drive serious revenue for my country—with its beautiful beaches and unique flora and fauna. Though there are about 200,000 tourist visits each year, there are still many tremendous potential for Ecotourism that could help create more jobs that will in turn be beneficial to the economy. In spite of the infrastructural challenges, there are business potentials for hotels and international airline companies, if only they can be brave enough to take the plunge!

Ok now, let go back to Sipromad that you have grown so exponentially. What are your reflections on the path to the C-Suite, especially some of the key translatable lessons from your time in the US?

United States – compared with Madagascar – is a developed country. My background helped me to transpose my skills on management strategies in order to offer to Sipromad Group a unique management system that’s suited to its own corporate culture. My leadership , conflict management, communication, and negotiations skills has really me in expanding the business. And we always ensure that we never deviate from our reality. Despite cyclical economic crises in Madagascar, Sipromad Group has been able to adapt its strategies based on our values and ethical standards.

Growing up did you always want to be an entrepreneur or something else, and how did that shape what you became?

My family and I are of Gujarati origins. Business is an integral part of our DNA. This legacy coupled with my background is attributable to what I am today.

Where is the biggest opportunity for the future of Sipromad?

Sipromad Group has successfully consolidated its activities in Madagascar as the leader in diversified industry working with international partners as Banque Centrale Populaire, Brinks, Orange, Tozzi Green, Apple, Rohde & Schwarz or Turkish airlines. With political stability, and attractive regulations, we hope to expand further into Africa because that is where the future lies. More importantly, we have identified sectors such as energy, broadcasting and telecommunications as the new focus for us.

In light of the developments and changes taking place in African markets, what is your assessment concerning business relations between Madagascar and the rest Africa?

Madagascar joined Southern African Development Community (SADC) and CommonMarket Eastern and Southern Africa (COMESA) in order to integrate the African market but the questions are : does this integration makes a real difference for Madagascar? Has it achieved what was expected?

To what extent have you promoted trade and investment in Madagascar to pave the way for FDI into to the country?

Sipromad Group is a reliable partner and has worked with a couple of international companies. This partnerships are the result of our respect for the state apparatus which is an essential factor for ensuring soid FDI in Madagascar.

What areas of investment could be most promising for Nigerian businesses?

Mining, tourism, manufacturing, export and energy sector are areas which could be most promising for Nigerian business

Do you have a role model? If you could meet any entrepreneur or business leader from history, who would it be and why?

My political role model is Barack Obama and my business role model is Bill Gates. Bill Gates is a model for me because of the empire he has built and the great humanitarian work he championing through his foundation.

Yes, talking about humanitarian work, you and your wife, Cinzia, established the Akbaraly Foundation. What is the mission here?

My wife and I have always been involved in charitable causes. The mission of the Akbaraly Foundation is to assist the less privileged children and women in Madagascar. Since it was founded, we have established prevention centers and mobile units in the country to detect and treat breast and gynecological cancers among destitute Malagasy women. We have achieved quite much and have even gone on to inaugurate the first oncology center in Madagascar, with mobile health care service that will travel all across the disadvantaged and underserved areas.

Sipromad Group is headquartered in the Orange Towers, widely known as the tallest building in Madagascar. What does this symbolize for the company?

It expresses ourcommitment to look even further ahead and symbolizes our successful financial policy. We also try to demonstrate that by investing in Madagascar, the economy will become more prominent, for the benefit of the nation as whole.