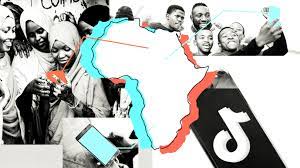 Relaxing after a training session at The Gambia’s Independence Stadium in September, a group of young athletes watched TikTok videos of Senegalese-born star Khaby Lame, who currently has the second-biggest following of any account on the widely popular social media platform, at 111.8m.

Lame’s short videos of comedy skits in which he satirizes people failing at seemingly easy everyday tasks had his audience in stitches. The Senegalese social media star has helped propel TikTok’s rapid growth on the continent since the beginning of the Covid-19 pandemic.

TikTok, created in 2016 by Chinese company Byte­Dance, became the world’s most downloaded app in April 2020, with more than 2bn downloads to date on Apple’s App Store or on Google Play. The latest statistics released by TikTok, in January 2021, show the platform had 689m monthly users worldwide, with numbers expected to have grown rapidly in the course of the year.

TikTok has identified Africa as a key growth market, with its young population, the increase in sales of Chinese-made smartphones, deepening broadband penetration rates, and cheaper internet data tariffs. With millions of Africans now using TikTok daily, the continent’s marketing firms are migrating to the platform to showcase their clients’ brands.

“Creativity is very much hardwired into the DNA of African culture, and even considering the many nuances and cultures, the one thing that cuts across is that we’re a pretty expressive bunch,” says Jacques Burger, CEO of M&C Saatchi Abel, a marketing and communications firm which produced TikTok’s first campaign in South Africa.

“The format is really suited here, with music, art, and dance very strongly linked to a lot of prominent African cultures. And at the height of this pandemic, I think people were looking for some light relief, something to juxtapose the heavy conversations and all the fear and related hardship. It became a bit of a substitute for what you’d normally get from social engagement or a good night on the town,” says Burger.

TikTok has been valued at over $50bn, with parent company ByteDance recording revenues of $34.3bn and gross profit of $19bn in 2020. TikTok makes money by selling advertising to brands on its platform by way of in-feed adds, brand takeovers, and branded hashtag challenges, where brands create their own challenges that appear on users’ discovery pages for their audience to engage with.

WhatsApp has over 10.2m active users in South Africa and Facebook over 9.2m, with Instagram securing half that number. Advertisers and communicators are “scrambling to understand what TikTok can do for them,” says Oresti Patricios, CEO at Ornico.

“Nando’s TikTok account is very entertaining, because they’re going to have an important societal discussion and it will also be funny. Ninety percent of the brands are really boring in their approach, but the best way to engage with TikTok is to create a story around a brand with an influencer whose personality fits that of a particular brand.”

TikTok also opened local offices and created specialist teams in the key markets of Nigeria, Kenya and South Africa, to organise meet-up “creator sessions” with social media influencers, teaching them how to engage with and utilise the platform.

This summer TikTok announced a $57,000 cash grant and mentorship on “content creation and curation” for 20 African influencers, while the Chinese video-sharing platform also launched its TikTok for Business initiative in South Africa to help businesses advertise and leverage trending content.

“What sets TikTok apart from other platforms is the personalised feed experience. Our platform is based on a content graph, not a social graph, meaning that good content will always get more visibility,” says Scott Thwaites, head of emerging markets at TikTok Global Business Solutions.

“In practice that means that videos are recommended based on what – rather than who – you like. To go viral on TikTok, you don’t need a single follower. The platform has a diverse range of users and it’s especially popular among Gen Z and millennials, and we’ve become increasingly popular as the go-to platform for African users to creatively express their authentic selves, and showcase their incredible skills.”

A Nielsen study reported that 71% of TikTok users did not mind ads from content creators as long as they were entertained, and with TikTok data showing that on average users spend 52 minutes per day on the app, a captive audience providing brands with a unique opportunity to advertise has emerged.

But that comes with challenges that many brands and agencies have yet to master. Advertisers have to let go of their brand and content on TikTok, and have it “cut up and fed back to you in all sorts of wild and wonderful ways,” says Burger. That’s a scary place for brands who are used to retaining control.

“But if you can find the right intersection there, it creates a wonderful opportunity for an audience and for consumers to really champion your brand, versus you having to do it completely yourself, which brings authenticity. So I think from that perspective, TikTok does present a unique opportunity for brands to express themselves, and to really hardwire themselves into culture and to create a sense of co-ownership with their audience.”

The app has faced down Donald Trump’s attempted US ban in 2020, challenged perceptions that it’s a fad just for kids, and faced accusations of peddling addiction among children.

Now it must maintain its fun, fresh and authentic image despite Islamic State members using it for propaganda purposes, and one of Egypt’s chief religious authorities – Dar al-Ifta – creating a TikTok account to roll out fatwas to a wider audience. African governments’ cosy relationship with China may protect it from the occasional social media bans that blight the continent’s digital landscape.

According to the Influencer Marketing Hub’s 2021 report, influencer marketing spend is up again, after a slowdown in 2020 – the industry is expected to grow close to $14bn worldwide this year – meaning key African influencers can expect greater paydays as brands choose to hitch their star with homegrown celebrities.

Chad Jones, a South African whose TikTok account showcases videos of him dancing to hip-hop tunes in choreographed dances with his parents, says he has paid partnerships with more than 30 brands.

“I think users and advertiser numbers will grow without a doubt, they are so clever,” says Patricios. “In terms of the fun, ‘vibey’, playful platform – which a lot of people and youngsters want – I think there’s not enough of this ‘let your hair down’ nonsense at the moment because everything else is just too serious, so audience engagement will continue to grow.”