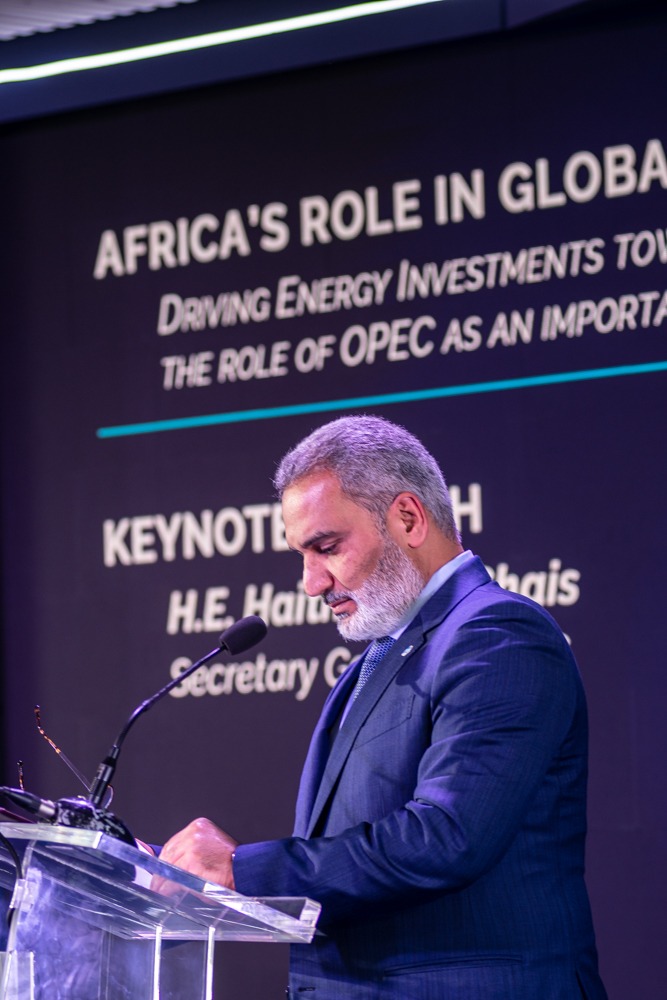 The first day of the African Energy Week (AEW) conference and exhibition saw a keynote address delivered by H.E. Haitham Al Ghais, Secretary General of the Organization of Petroleum Exporting Countries (OPEC). During his speech, the Secretary-General talked about OPEC’s global outlook, the biggest problems facing oil markets around the world, and Africa’s important role in the group.

H.E. Al Ghais began his address by saying, “African Energy Week continues to go from strength to strength and is now a leading event on the global calendar. I would like to thank the President of the OPEC organization for his leadership during these trying times.”

Speaking on ‘Africa’s role in global energy security: Driving energy investments towards a sustainable future and the role of OPEC as an important source for energy security,’ H.E. Al Ghais provided key insight into the organization’s strategies for driving stability across Africa and the role the recent Declaration of Cooperation plays in improving stability.

“The producers of the declaration of cooperation remain a vital stabilizing force despite being in a period of great uncertainty. The last meeting was held a few days ago and the heads of delegations unanimously decided to take a proactive stance to create stability in global markets. With the very real potential of a global recession, there was a consensus among the Ministers. I would like to thank the African heads of delegations for their ongoing support to provide lasting stability in global oil markets.”

Touching on the state of play of the global oil outlook and the organization’s outlook, H.E. Al Ghais stated, “Our actions in the short term most certainly have an impact on the longer term. On October 21 we will be launching the next edition of the OPEC World Outlook. This flagship publication provides a detailed overview of the long-term forecasts for global energy markets. Demand for energy will continue to rise dramatically. Despite a minor decline, oil will still share the largest share of the energy mix by 2025. The combined share for oil and gas is expected to remain above 50% by 2025.”

Meanwhile, in addition to market challenges, climate change will continue to have significant impacts on global economies, with H.E. Al Ghais explaining that, “OPEC supports SDG 7 which seeks to increase access to affordable, reliable and sustainable energy for all. Energy, like education and healthcare, should not be considered a luxury but a basic human right. The overarching issue of climate change and energy transition will have massive implications for Africa. Countries around the world continue to adapt to the rapidly changing dynamics of the industry. In this context, Africa is in a very fragile position. African countries stand to be on the losing end of the consequences of climate change. OPEC will continue to advocate for Africa.”

Thereafter, H.E. Al Ghais discussed Africa’s key role in OPEC, highlighting that, “With seven members, Africa makes up more than half of OPEC’s overall membership. This increasing presence led to the establishment of the first-ever high-level OPEC-Africa energy dialogue. Through this dialogue, we look forward to enhancing our focus on this continent and its energy future. Africa’s energy future is bright and the opportunities are vast. As of 2021, Africa’s proven oil reserves amounted to over 120 billion barrels. There are increased opportunities for enhanced intra-African trade. Despite the many challenges that lay ahead, we will continue to see Africa’s energy sector thrive and develop for years to come.”