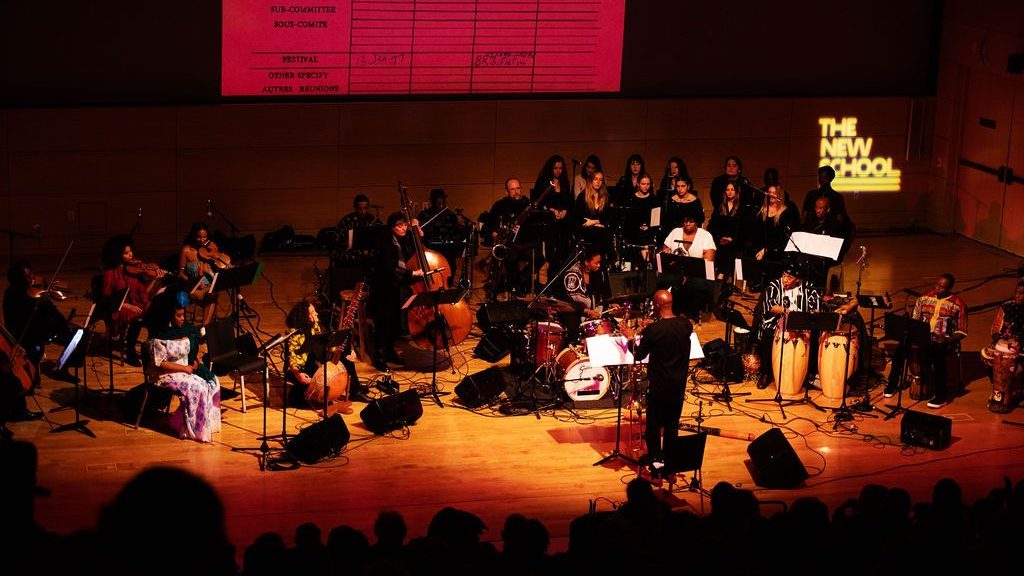 The Chimurenga arts collective explores the relevance of FESTAC, a near forgotten, epic black arts festival held in Nigeria in the mid-1970s, for our age.

In January 1977, Nigeria’s government hosted 17,000 artists from Africa and its diaspora for 29 days at the 2nd World Black and African Festival of Arts and Culture (FESTAC) in the country’s commercial capital, Lagos. (The first such festival was held in Dakar, Senegal in 1966). FESTAC remains the largest gathering in one place of black and African artists as well as intellectuals from the continent and in the diaspora. One group that stood out by their presence was the African-American delegation. This contingent included Sun Ra, singer-songwriter Stevie Wonder, the feminist academic Audre Lorde, and writer Alice Walker, among many others.

At the beginning of October 2019, three Chimurenga staffers—Ntone Edjabe, Dudu Lamola, and Graeme Arendse—were to travel to New York City to accept the prize. Chimurenga is widely known for its publications, most notably the Chronic, but it also runs a music project, the Pan-African Space Station (PASS). The latter consists of concerts, an archive, and a pop-up radio event, which Chimurenga has hosted in a number of cities including Cairo, Harare, Helsinki, London, and previously in New York. As part of the festivities for the prize-giving, Chimurenga wanted PASS to recreate the experience of FESTAC.

Upon Ntone, Lamola, and Arendse’s in New York, the white-cube gallery of the Aronson Galleries at The New School—the venue for PASS—transformed almost overnight. Before a wall covered in a soft but serious red—Chimurenga red—was a plush sofa set adorned with kitenge print fabric. Pastel colored, retro armchairs huddled around coffee tables throughout the rest of the room. A black and white photomural of young, African-American artists in a conference hall in Lagos covered the adjacent wall. This image was captured by Calvin Reid, a photographer who had been a part of the US delegation at FESTAC. Once the setup was complete, the room felt like a personal library, but one owned by an erudite person with a taste for making guests feel at home.

As the first day of the broadcast got closer, I tried to articulate for friends and on the VLC’s social media platforms what was meant by a “Pan-African Space Station.” It’s a literal space station? Well, it’s at the New School gallery. Oh, so it’s an exhibition. No, there won’t be anything hanging on the walls. It’s more like a radio show. So, they’ll be recording there and we can listen in? Yes, but the point is to have guests present. Huh? Yes, think of it as a radio show hosted before a studio audience. I exhaled. That sounded close. But I knew it wasn’t quite right. This implied a separation between audience and speakers, between backstage and frontstage. But the layout spoke to something else entirely.

PASS would begin with a reflection on afrofuturist bandleader Sun Ra Arkestra’s performances at FESTAC. Jazz musicians Craig Harris and Ahmed Abdulla, who traveled to Lagos as then members of the Arkestra, would join Edjabe, photo documentarian Calvin Reid, and jazz educator Richard Harper for this conversation. On day two, the poet Harmony Holiday would host black, female artists who had attended FESTAC. Among her guests were official FESTAC photographer Marilyn Nance, sculptor Valerie Maynard, and novelist Louise Merriweather. Day three would explore the visual memory of FESTAC through the archives of photographers who had documented the event, including Nance and Reid.

PASS would culminate in a rare performance led by Craig Harris, who had written a jazz suite commemorating the spirit of FESTAC soon after his return from Lagos. Harris had only performed the suite once before, in 1982.

The day finally arrived, and it felt like a homecoming. FESTAC alumni greeted one another with such emotion; some had not met since Lagos more than 40 years ago. Students, academics, artists and others slowly streamed in, walking around the room with keen interest but keeping a respectful distance. The alumni excitedly pointed out their younger selves on the photomural, a photograph by Calvin Reid, and in the massive book of FESTAC archives that Chimurenga launched at PASS.

As the room filled up, FESTAC participants settled in on the couches up front. An “On Air” light flickered on. The room fell into a hush. The alumni recalled stories of their time in Lagos like it was yesterday. As they talked, recorded sounds floated in the background—radio interviews from the FESTAC venue, performances by various groups that had been in attendance. I can only liken it to time travel. When the lights came back on for a brief break, I had forgotten where I was.

As Tadiwa Madenga, a PhD candidate of African and African American Studies put it, “when an older person looks you in the eye and says: ‘This was the best event in my life,’ it is different from hearing it in a podcast.” This was part of Chimurenga’s intention and design, to construct a space that allowed time for these questions to form and to inform conversations between FESTAC participants and audience members gathered to hear them speak. As I replaced thermoses full of hot coffee, I overheard a few of those questions. Did you meet Kenyan artists while you were at FESTAC? How did the event influence you personally? And your artistic practice?

All of a sudden, there was so much to talk about. These stories from this largely forgotten event gave us a shared history in the recent past. For me, it felt personal. Coming to the US from Ethiopia as an undergraduate, I had felt a strong kinship but was sometimes at a loss among the various communities of black people from the US and from around the world. We were of Africa but recent histories had diverged our paths. What was our common language?

I would later learn that, during their studies in the US, front-runners of the Ethiopian Student Movement had fought and organized alongside black Americans in the Civil Rights Movement. That Claude McKay, a literary giant of the Harlem Renaissance, had written Amiable with Big Teeth about the African-American campaign to support Ethiopia at the onset of the fascist Italian invasion in 1935.

Rediscovering this shared legacy gave me a stake in the conversation, and much more. But, learning about FESTAC was entirely different. The very scale of this gathering in Lagos was epic.

Neither was FESTAC simply a celebration of black culture. The festival became a lobbying ground against apartheid South Africa and the still-colonized Rhodesia. On a larger scale, the organizing committees became embassies of new imagined black states, “Black Britain,” “Black America,” “Black South Africa”—alongside recently independent African states. This facilitated a direct line of communication among black peoples that was not mediated by the official state apparatuses that invariably oppressed the people they claimed to represent.

During her conversation with the female alumni, Holiday read a reflection about the communities of black female artists that had emerged from FESTAC. Among many questions, she asked, “can a festival turn into eternal solidarity?” “Can we defeat our common enemies … [and] … capitalism’s ability to turn all creative output into a commodity?”

These questions highlight how relevant FESTAC remains to global discourses about blackness and diaspora, community and resistance. While we no longer have the same colonial apparatus to battle on the continent, these questions still remain. What does global black solidarity mean in this day and age? How do we institutionalize solidarity towards a concerted outcome? The possibilities are endless.

In the meantime, it was enough that the event just happened. “I was so moved to be in that space and to be transported to this time and place [that] I had imagined largely by myself,” said Kleaver Cruz, a writer in the audience who is independently researching FESTAC for a forthcoming book—“imagine” being the key word here. For curator Koyo Kouoh, the Jane Lombard Prize jury chair, Chimurenga “boldly and unapologetically reclaim[s] the African imaginary.”

Craig Harris’s concert brought PASS’s three-day journey full circle. A spirit of generosity and communion permeated the concert, as undoubtedly it had done at FESTAC. By the end, there was a murmur floating around from conversation to conversation. It sounded like, “imagine what FESTAC might look like in 2020 …”