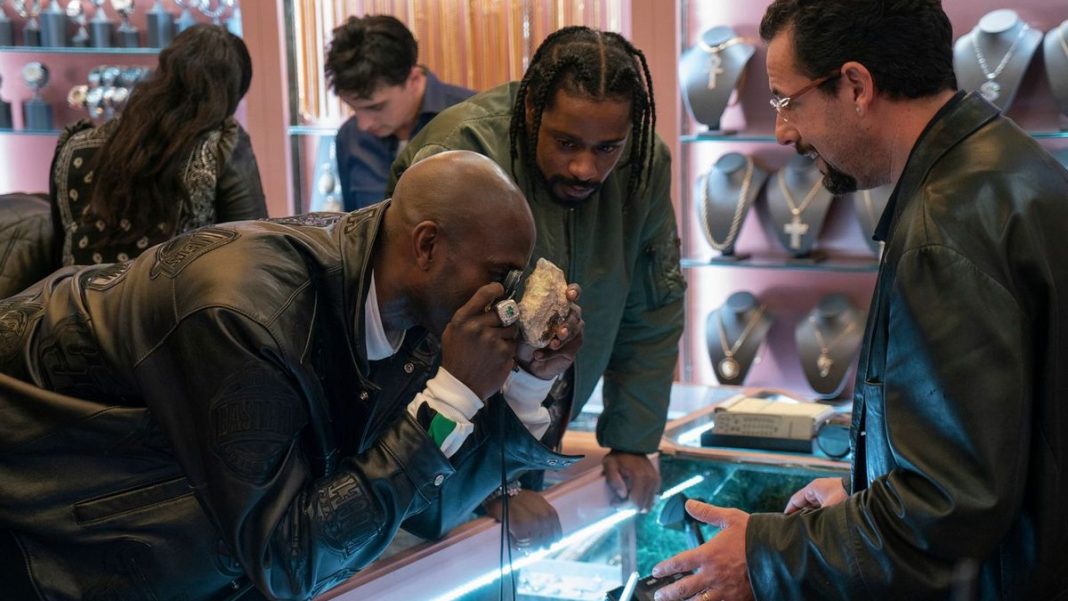 In A24’s latest crime thriller, Uncut Gems, everything begins in Ethiopia. Opening with injury, the film starts in 2010 at the scene of two familiar crimes—the exploitation of land and of man. First, an African miner emerges from the Welo mines of Ethiopia carried by his coworkers. His leg, mangled and bleeding, demands the attention of medics and mine managers alike. Shots of the man’s bone exiting his skin are soon replaced by those that show another protrusion. Though his bloodshed breeds commotion and conflict, the mine, always a worksite, continues to produce profit in the wake of his cries. Unearthed in the mines by another set of miners, the film’s namesake appears—an uncut black opal. The stone, still married to rock, shimmers even in the darkness, as if it were promised to a life beyond the mine. Propelling the rest of the story, the jewel swiftly leaves the African continent and all of 2010 behind. And though its geography changes, matters of extraction and indebtedness seem to follow the opal throughout its travels—haunting every transaction made in its name.

Reappearing in 2012 in the office of New York-based jeweler Howie (Adam Sandler), the opal has been smuggled into the city in a fish carcass, and it is subsequently advertised through folklore. Though the majority of the mining that takes place in Ethiopia is, in reality, dedicated to gold, tantalum, phosphorus, iron, salt, and gas reserves, the film zeroes in on the country’s gemstones. Howie asserts that the black opal exists in surplus amongst “black Jews” who’ve been “trapped in Ethiopia.” As he explains, these people who’ve allegedly grown numb to the stone’s beauty are both the “chosen people” and the “first peoples” of mankind, both Jewish and Ethiopian. “This is old-school, Middle-Earth shit,” Howie remarks. Cleaning the stone’s origin story of its impurities, Howie goes on to divorce the opal from its past as a product of violent systems of extraction. Still, though the explicit image of exploited black laborers and non-black overseers is erased from the opal’s American debut, the film’s black characters seemingly have the most intimate interactions with the gem. And it is through their encounters with the opal—in Ethiopia and the United States—that the violence and power of Howie’s narrative work is realized.

While introducing the gem to Boston Celtics player Kevin Garnett, Howie the jeweler transforms into Howie the orator. As if to suggest the stone’s unique significance to his black costumer, Howie gives an impassioned speech about the gemstone. Like any good salesman, Howie tailors his pitch to his buyer. Waxing poetic about the black opal, he introduces the stone to the NBA star as an unproblematic beauty with distinctly black African origins. Enraptured by the stone and its story, Garnett and his posse opt to take the gem immediately—in the hopes that the opal’s assertiveness might rub off on the court. And though Garnett gives Howie his championship ring to hold as collateral, somehow the transaction still feels wholly uneven. Uninformed of the true past of the opal, Garnett puts a piece of his personal legacy on the line in order to access an exploited diasporic one. As the movie goes on, the baller’s manic obsession with opal proves to be a vulnerability he cannot shake.

Embodying a dramatized sensitivity to African folklore, the black characters in the US demonstrate both spiritual and political attachments to opal. Even Howie’s assistant Demany (Lakeith Stanfield), who recruits high-profile clients for a living, is not immune to the powerful narrative Howie spins. “Black Jew power!” Demany shouts as he exists the jewelry shop, emboldened by the almost-sale. Entranced by the stone, an eager Garnett vows to purchase the opal, once and for all, when Howie puts it up for auction. As Garnett explains, his relationship to the opal is distinct. The gem speaks to him, makes him feel as if he can fly. It is almost ancestral, the bond he describes. In thinking of diasporic flight, one might even recall the legend of flying Africans—the folklore of enslaved peoples who dreamt of mobility through ancestral air-lifted escape. Yet, in the case of Garnett, the Black American athlete who seeks to own his little piece of Africa, ancestral flight ends by crash-landing.

Toward the end of the film, when Garnett discovers the truth of the opal’s violent past, he must contend with two kinds of betrayal at once. As he breaks down, accusing Howie of “playing with [his] emotions” and ripping off the workers at Welo, he must also grapple with his role in the scheme. As a buyer, he must consider his own complicity, that which implicates him and all those involved in the violence perpetrated by the Western jewelry industry. But still there is more. On a personal level, he must face his own vulnerability, that which made him a prime target for the specific kind of manipulation Howie employs—a naïve diasporic yearning for connection to the continent. Complex yet coherent, this development reveals a theory of blackness built into the world of Uncut Gems.

Whether the film is exploring labor relations in Ethiopia or race relations in New York City, what unifies its black characters is that they all occupy the position of exploitable subjects. Across geographies and cultures, they each come to occupy a relational identity, best conveyed by the making of capital out of casualty. In this way, the film’s hijinks embody the chaotic and unsettling truths that undergird our world. Uncut Gems reminds us that there is no such thing as unproblematic beauty, that both wealth and wins come at a cost—that under capitalism, objects, people, and histories can and will be appraised.