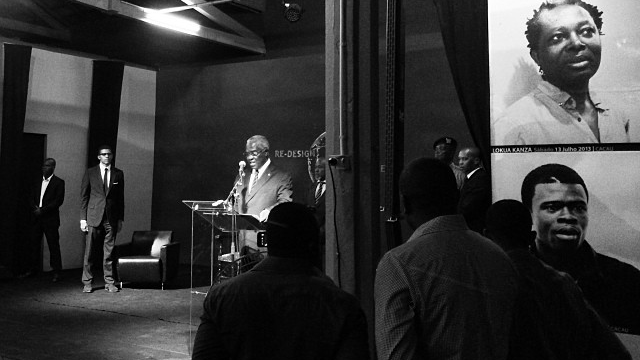 Coverage of the #LuandaLeaks revelations have steered clear of the art world dealings of Isabel dos Santos’s husband, and art luminaries have largely defended Dokolo’s reputation.

Coverage of the #LuandaLeaks revelations have steered clear of the art world dealings of Isabel dos Santos’s husband, and art luminaries have largely defended Dokolo’s reputation.

Sindika Dokolo is reputedly the biggest collector of African art and also its most generous patron. Dokolo is also seen as a leader in the movement to repatriate stolen African art and artifacts from Euro-American institutions to African ones. And he is the husband of Isabel dos Santos, celebrated as Africa’s richest woman and a longtime target of criticism by Angolans, like investigative journalist Rafael Marques de Morais and now #LuandaLeaks, for her corrupt business dealings and large scale theft from the Angolan state. (She got her start as daughter of Angola’s longtime former president.) What has been striking thus far has been that coverage of the #LuandaLeaks revelations, and previous investigations of dos Santos, have steered clear of Dokolo’s dealings in the art world and luminaries in that world have largely defended Dokolo.

If you missed it, #LuandaLeaks, which broke last Sunday, show how Dos Santos and Dokolo “were allowed to buy valuable state assets in a series of suspicious deals” that personally benefited them and cost the Angolan state and taxpayers millions of dollars.

That little connection has been made between #LuandaLeaks and Dokolo as art patron and activist, may because of his own PR. Dokolo articulates his efforts to investigate and repatriate stolen art objects to African nations in a decolonial discourse that distances him from global systems of economic injustice. To be sure, he is unique in the world of collecting, fashioning himself as both a member of the elite and a postcolonial activist who has made good on his talk about restitution, even as he propagandized it. He promotes this image in countless media interviews and on his own social media. Take a recent Instagram post by Dokolo. His foundation had bought space on the NASDAQ electronic billboard in Times Square in New York City, highlighting his work repatriating African art. The Instagram video of the billboard is accompanied by this comment by Dokolo:

#GiveBackOurArt. We repatriate African art to museums in Africa. African art is our history, our identity, our dignity. My history didn’t start in 1482, the 1st time a Portuguese explorer set eyes on a subject of the Kongo kingdom. I was there before, I was there all along.

Will the #LuandaLeaks story cast his narrative in a new light?

The launch of #LuandaLeaks has sent Isabel dos Santos, the Angolan government, international banks, accounting firms and bankers scrambling. The Sindika Dokolo Foundation website is suddenly “undergoing some maintenance.” On the eve of the World Economic Forum, organizers removed dos Santos’ name from the list of participants gathering this week in Davos, Switzerland. EuroBic – a Portuguese bank in which dos Santos is a key shareholder – announced it would sever all ties with her. The London-based global business services firm Pricewaterhouse Coopers did the same. The head of its Lisbon office’s fiscal and audit department, Jaime Esteves, went so far as to step down, citing the “seriousness of the Luanda Leaks allegations.” The Angolan Attorney General, Helder Pitta-Grós, said the Angolan judiciary is working to bring them back and to pursue action against dos Santos and Dokolo for using state money for personal profit. As global businesses and their leaders avert their eyes, cut links, and publicly declare their distance from dos Santos and Dokolo, the art world seems to be taking a wait-and-see-approach.

Luanda Leaks has not left Dokolo unscathed. Still, no one has raised the implications for Dokolo’s art collecting and art restitution campaign. The French newspaper, Le Monde, reports, that for the most part and for now, Dokolo’s associates in the art world are standing by him. Le Monde quotes Simon Njami, a leading curator of African art in Paris and who Le Monde identifies as a former art advisor to Dokolo: “I refuse to scream with wolves. As far as I know, Sindika was not a dealer in weapons or drugs. As far as I know, he did not manage national companies. Until further notice, what I retain from him is that he has advanced contemporary art in Africa and I keep all my respect for his action.”

Most of his art-world colleagues find Dokolo sincere in his love of art; they seem willing to separate his profile as a collector (and now curator) from any allegations of financial wrongdoing with his spouse. Anna Alix-Koffi, a French-Ivorian magazine publisher and curator, told Le Monde: “Do you know many people who would buy works for hundreds of thousands of euros to return them to their country? He is a defender of African art and, as such, I am by his side.” Further, they tend to believe Dokolo’s now-undermined claim that his money and interests are separate from Isabel’s.

Here’s the problem: of course, we fully support the restitution of African art, the expansion of art scenes on the Continent, and rethinking museums, but we question whether the economic system that makes Dokolo’s work possible comports with the social benefit of art repatriation. If African art becomes an empty symbol of decolonization, it risks becoming a fetish once more.

It is also the case that Dokolo’s aggressive publicizing of his efforts tends to obscure the years-long effort to repatriate Angolan art that preceded him. Dr. Nuno Porto has written about the risks and rewards of those efforts for many years. As art institutions become nearly totally dependent on philanthropy, the restitution of African art risks becoming a PR maneuver for political or business ventures, a practice that has garnered its own neologism: “artwashing.” Philanthropy underscores the power and glamor of giving, whether it is George Clooney, Oprah Winfrey, Bill and Melinda Gates, or Mo Ibrahim. However, the bright lights and bling of giving obscure the almost total non-transparency of philanthropy. The purported “good” of art to society is completely undermined by the lack of the very “public” scrutiny that is required of policy work. We should all worry when private money replaces public policy.

Dokolo has worked with the Angolan Ministry of Culture, advocating a mixture of public and private funding that carries the risk of the philanthropists losing their financial stability or shifting their focus. State entities are tasked with collecting and displaying cultural heritage and the terms are clear: it belongs to the public and should be a visible part of public life. The MPLA, Angola’s ruling party since independence in 1975, was clear about this public ownership of art in their many statements about culture and art after independence.

#LuandaLeaks gives us an opportunity to consider the privatization of public goods, whether Sodiam funds, loans from Sonangol, or artworks. This is a story that should make us all uneasy; it braids together kleptocracy, philanthropy, and a discourse of decolonization. Dokolo and dos Santos argue that Africans are often unfairly singled out as corrupt, despite their use of this fact to deflect scrutiny. And they aren’t wrong. There is talk about trouble at PwC, but reporting shows that attention clings to dos Santos and Dokolo more readily than to the accountants, especially Western ones. Accounting and business service firms facilitate and regulate the global economy, crafting tax shelters and offshore accounts, but they tend to not have exciting public images or much of a presence on social media platforms. Yet we might do well to think of them as Hannah Arendt imagined German bureaucrats under Hitler: accountants make theft banal. These European and American firms helped dos Santos and Dokolo launder the money, like much of the art world is now called to do. Dokolo’s repatriation efforts and his patronage of African artists, no matter how sincere his interest, clean up his image while making art dependent on dirty money. This is why his art world and academic collaborators are so quiet. But just as the pressure mounts for museums worldwide with campaigns like #decolonizethisplace, the time may be up for revolutionary rhetoric funded by illicit gain.