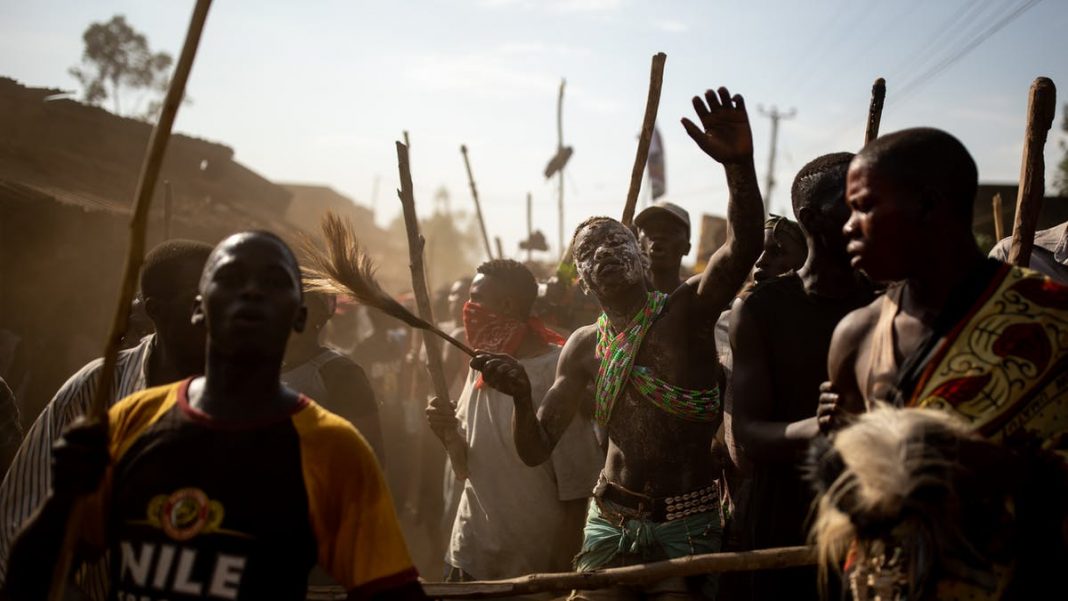 TheBagisupeople of eastern Uganda boast of special places where they gather to perform cultural rites, among themimbalu, a male circumcision ritual.

These sacred spaces can exist in the form of groves, rivers, thickets or even playgrounds. Namasho in Bududa District, for example, is at the confluence of the Manafwa and Uha rivers and has a sacred swamp where imbalu candidates are smeared with clay. Bumutoto in Mbale District, another important site, is a simple expanse of land designated for ritual purposes.

Although some of these places were made sacred through the consensus of elders, their existence is also attributed to supernatural beings. These sites participate in showcasing and transmitting these ceremonies and their music and dances to those who come to witness events. The sites thus act as archives for the community.

As an ethnomusicologist, I have carried out research in Bududa and Mbale over seven years focusing on how these sites are safeguarded by the community to become places where ritual performances are archived.

This demands that we even consider songs or paintings as mechanisms through which artists put their ideas for retrieval and use in future; an archive.

The idea that archiving can only be done by societies with technologies of repetition such as audio recorders or cameras is shallow. People who rely on oral tradition have ways of ensuring that what they have is safeguarded and kept for others in future.

Mystudiesfocused on a recreational space – a playground called Bumutoto – as a living archive among the Bagisu. In this context, to safeguard such a place is to archive the rituals, musics and dances staged there.

TheBumutoto Cultural Groundsare situated in Bumutoto village near the town of Mbale. Despite serving as a playground where people relax as they drink in the nearby trading centre, this site is known for activities geared towards the inauguration of imbalu circumcision rituals.

Imbalu initiates adolescent boys into manhood. Although many accounts exist, the history and act of imbalu remain largely a mystery.

The most commonaccountis that imbalu was brought to the region by Nabarwa, aKalenjinwoman from Kenya who married Masaaba from Bugisu. Despite the Bagisu abandoning this ritual eventually, one Fuuya, believed to have lived in the present day Bumutoto, revived imbalu as a healing remedy for his sick sons.

Other Bagisu followed suit because they saw that imbalu was associated with supernatural powers. Interview subjects told me that Fuuya planted a sycamore (kumutoto) tree in his compound to mark where other people should be circumcised in future. As Fuuya’s clan multiplied, they became known as Bamutoto and the place, Bumutoto.

In homage, no other Mugisu may be circumcised until the initiates from Bamutoto are. Every early August during even-numbered years, the Bagisu from all the districts congregate at Bumutoto to witness the imbalu ceremonies.

Initiates put on distinctive regalia – thigh bells, head gear, skins covered in cowrie shells – to perform imbalu music and dances. There are speeches by cultural enthusiasts and guests. People play music by local pop musicians on CDs or memory sticks, or there are live musicians. The three dances that guests, and particularly initiates, perform during the festivities are called isonja, tsinyimba and kadodi.

Isonja, also staged between January and March in initiates’ villages, provides a platform for boys to be tutored in dancing and composing imbalu songs. They bend their backs and stamp the ground, form a circle and dance in a clockwise direction imitating the movement of the sun.

During the tsinyimba dance the dancer ties a metal bracelet at the wrist and knocks it with a bell (liyimba) to provide a rhythm. This dance is common among the Bagisu living in Namisindwa District, close to the Bakusu of western Kenya where it is believed to have originated. A set of five drums provides the throbbing beats for the kadodi dance, which accompanies imbalu dancing parties as they visit cultural sites and relatives.

Bumutoto as a living archive

As these performances are staged, they turn Bumutoto into a living archive that opens its doors to people who want to access and learn from what is kept there. These are materials related to the origin of imbalu circumcision rituals as well as the music, dance and costume associated with this ritual. Through speeches and songs, the history of imbalu is further brought to the fore.

As candidates perform, they showcase the music and dances they learned during the earlier stages of imbalu, as well as the costumes they created or received from elders. Guests can easily tell what district a group of candidates comes from by looking at what costume they wear. Additionally, Bumutoto becomes an archive which showcases the power structures among the different clans of the Bagisu.

Like modern Western archives, there are special people in charge of the different performances at this site. Assisted by security personnel to control the mammoth crowds, they are the ritual experts who direct the public on where to pass and which rituals to witness. These ritual experts open and close the door of this archive to users.

In spite of debates calling for unlimited access to material in archives, it is a common custom for archivists to regulate the access to and use of material in the custody of archival institutions.

From these discussions, it becomes plausible to argue that a cultural site can act as an archive for a community.

Although one may see ‘nothing’ stored in such archives on ordinary days, these places are full of materials that articulate the socio-cultural, political and historical context of the community.

Preserving such areas is tantamount to archiving the rituals, musics and dances performed there. Governments and conservation experts should establish ways of working with local communities to safeguard these sites for future generations.

This article first appeared on The Conversation