Home Culture Music is the weapon 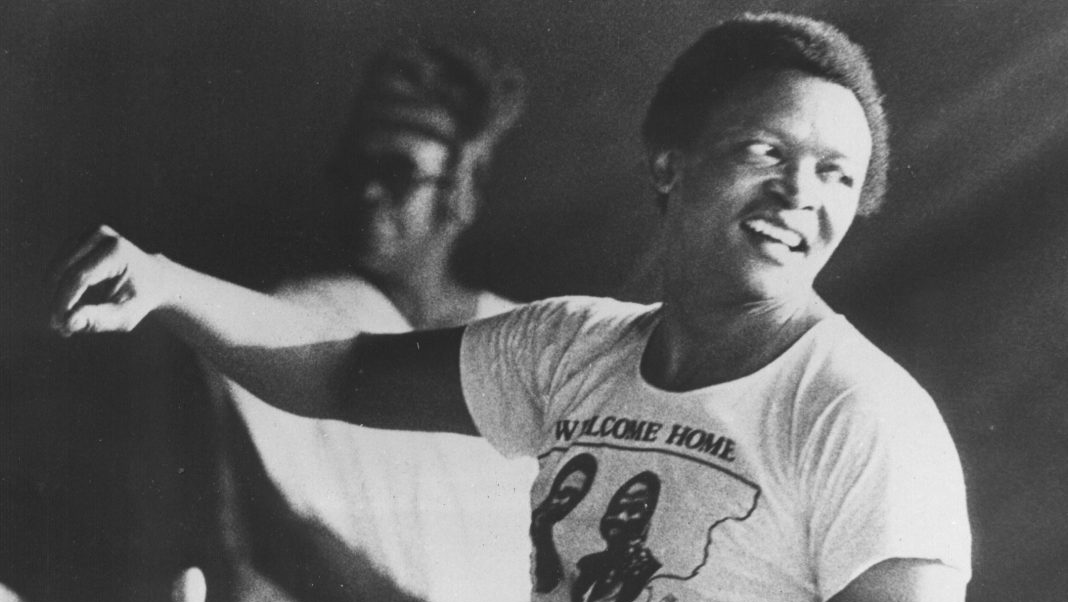 During Christmas 1980, Hugh Masekela and Miriam Makeba performed at a concert in Lesotho that deeply challenged and disturbed South Africa’s apartheid regime. The record of that concert is being reissued.

For an artist as prolific and famous as Hugh Masekela, it is remarkable that the music and story ofLive in Lesothohas remained buried for so long. On 28th December 1980, Masekela together with Miriam Makeba staged an unprecedented stadium-filled concert in Lesotho, an event that deeply challenged and disturbed apartheid South Africa’s oppressive fabric. It also uplifted a crowd of more than 75,000 South Africans and their fellow Southern African revelers.

This recording evidences an extraordinary confluence of experiences linking music, defiance, exile, and reconnection. At the time South Africa’s front line neighbors Lesotho, Swaziland, Botswana, and Mozambique gave safe haven to South African volunteers going into exile to join organizations of the liberation movement. A growing flood of young South African men and women were secretly crossing the borders to join up. The apartheid regime began to push back hard, first with raids, assassinations, and then bombings. So, what might they do when two globally prominent South African musical ambassadors for freedom propose touring Southern Africa?

Wealthy Zulu businessman, hustler and jazz super fan Victor “Blowie” Moloi dreamt of bringing Masekela to Southern Africa for a series of performances. Masekela had never returned to the region since he left twenty years earlier. His international activism led to him being banned from returning to his home country. During the late 1970s Moloi was in regular contact with David Marks of 3rd Ear Music, looking for a way to make this dream come true. Marks had been corresponding directly with Masekela. “We both knew the problems. It wasn’t going to happen.” says Marks.

In his biographyStill Grazing, Masekela describes receiving a call from Moloi who said:

Hugh, you and Miriam have now been gone from home for over twenty years, and even though most people have been buying your records, they would love to see you perform in person. I know you cannot come to South Africa, but we could organise three stadium concerts in Swaziland, Botswana and Lesotho. Why don’t you come down and do it for the home folks?

Masekela pitched the idea to Miriam Makeba, and she was enthusiastic. She would bring her band from Conakry in Guinea and Masekela would bring his from New York. They would hold big stadium concerts, in Botswana, Lesotho, and Swaziland. Moloi guaranteed all payments. The concerts would be billed as “Welcome Home” for the exiled Masekela and Makeba.

Upon arrival in Lesotho, the musicians were met with bad news. Moloi informed them that the governments in Swaziland and Botswana had forced cancellations as a result of pressure from the regime. There was also some disinformation about cholera outbreaks. Only Lesotho, a small landlocked country entirely surrounded by South Africa, stood firm, the show would go on. People who had planned to go to the other concerts went to Lesotho instead.

Here, so close to the heart of the beast, were two global anti-apartheid cultural icons defiantly bringing solidarity and calling for the world’s attention. Local artists Uhuru and Frank Leepa kicked off what became an amazing party for the crowd, and a deeply emotional experience for the returning exiles.

Moss Tau, a close friend of Masekela’s, recalls the vibrant scene. “It was like an invasion of Lesotho. It was chock-a-block! Lesotho ran out of food. They ran out of liquor. There was no hotel space. South Africa was all there. People were parked from the border going across all the way to the stadium. Lesotho was packed throughout for that groovy weekend.” Music-lovers partied throughout the night and some slept on the sidewalks, in doorways of storefronts, and in the parks. Everything ran out and emergency measures were taken to stock up from nearby South African towns.

Saxophonist Rene Mclean recalls of the concert, “Lesotho was overrun with people. It was really an unbelievable experience to see how many people came to see Bra Hugh and Miriam. It was a very celebratory occasion the whole time we were there. Life was one big party and celebration.”

A poignant story cuts through Masekela’s Lesotho adventure. Unable to go home, he was reunited with his father at the Maseru border-control bridge between Lesotho and South Africa. This meeting was the first time Masekela saw his father in twenty years. Their embrace was filmed but where that footage is today remains a mystery. The deep effect of this experience on Masekela was recounted by both Marks and Mclean.

Reunited with long-lost family members, Masekela invited his grandmother, then celebrating her ninetieth birthday, onto the stage and introduced her to the audience. He performed for over two hours, singing many hits inspired by a homeland to which he could not return.

The entire celebrations tore a gaping hole in the insulation the Apartheid overlords had tried to build for the protection of their racial superiority. Miriam’s and my performances reverberated right across the Drakensberg mountains and valleys and into the most venerated corners of South Africa’s white supremacy citadels.

In his biography, Masekela recalls:

It was especially frustrating to look into South Africa from Maseru’s high elevation and have to absorb the pain of not being able to cross the border to go home. Alf Khumalo took a striking photo of Miriam and me looking over the border. It appeared on the front page ofThe Starnewspaper, graphically depicting our painful presence so close to the country of our birth, which we dared not enter.

Lesotho was home to a large contingent of political and cultural exiles, including a substantial community of active ANC members. Masekela stayed in Lesotho for three months, after which he took up an invite to visit childhood friend George Phahle who was exiled in Botswana.
Moloi and Marks planned to record the stadium performance but technical difficulties interfered and a clear feed could not be established. It was then decided that for the purposes of recording, a follow-up concert would be organized at the Maseru Holiday Inn, where the band was staying. Shortly after the stadium concert a more intimate gathering took place at the hotel theater, along with invited guests.

The pressing and distribution of the record itself was funded and managed by Marks, who came on board as executive producer. For the album, Moloi, Marks, and Masekela joined forces to form Down South Records. The initial print-run is said to have only been 150 copies. A second print run was “less than 500.” Marks recalls that when he tookLive in Lesothoto shops in South Africa, none of them seemed interested in stocking the album. At a time when other Masekela albums were selling in their thousands, it was puzzling whyLive in Lesothowas somehow not so easily available in South Africa. It was never released internationally.

While living in New York in the 1970’s, Masekela was surrounded by a vibrant community of South African exiles including musicians Jonas Gwangwa and poet Keorapetse Kgotsisile. He would often play at Mikell’s, an influential club frequented by many jazz greats and a significant community of black artists, poets, and writers.

When Hugh said we’re going to do a tour of Southern Africa, naturally we were very excited. None of the band had ever set foot on the continent in our lives. It was a very emotional and spiritual event in my life, because Africa was at the centre of our politics. That trip changed my life in many ways.

After the concert, the rest of the band returned to the US, but McClean stayed on with Masekela. He recalls that the trip was made more special as he met his future wife in Lesotho.

For the big stadium concert, t-shirts were printed with Masekela and Makeba’s faces with the words “Welcome Home.” Still, this return two decades in the making didn’t quite bring him all the way home. The powerful emotions of homecoming and the pure elation of that time can be felt throughout the entire recording, including many of Masekela’s biggest hits. Looking back Mclean says, “We were so blessed that Blowie Moloi had the courage and the insight to do what he did. Despite the obstacles that were there.” He adds, “Hugh was always celebratory but at the same time he was serious about his commitment to the liberation and the role his music played.”

Considering the musical background of all the musicians contributing, the result is a highly energetic, funk and groove-infused recapturing of some of Masekela’s favorite tunes to perform live. For this reissue the track listing has been restored to what is understood to be the original playlist, opening with a longer version of “Ashiko,” the hit penned by Nigerian saxophonist Orlando Julius Ekemode. This is followed by Caiphus Semenya’s “Ha Lese Le Di Khanna.” The haunting feeling of displacement is palpable in “Stimela,” echoing the plight of the region’s migrant workers. Another Semenya track, “Part Of A Whole” gets an upbeat reworking, with Hotep Galeta’s Sister Fania keeping the groove for near on twelve minutes. The album and concert closes with Makeba’s “The Healing Song (Bajabule Bonke).”

The decade leading up toLive in Lesothosaw Masekela returning to a pan-Africanist take on his music, looking further back into his African roots. In 1972, he collaborated with Dudu Pukwana on “Home Is Where the Music Is,” an experience which influenced him greatly. He moved through Nigeria, Guinea, Liberia, Zaire, and Ghana, meeting and recording with musicians such as Fela Kuti along the way. He also curated a pan-African line-up for the massive Zaire ’74 concert.

One of the intentions Masekela had was to open a recording studio and a music school in the region. The government in Lesotho expressed interest in creating this studio and even started looking at architectural plans. However, the idea fell through. Some years later, Masekela moved to Botswana and formed the Botswana International School of Music with Dr. Khabi Mngoma. His record label Jive Records helped him to set up a mobile studio in Gaborone. In 1985 a brutal attack occurred in Botswana where apartheid regime hit squads assassinated 16 people suspected of being “terrorists,” among them Masekela’s friend George Phahle. Hugely disturbed by this, Masekela reluctantly moved to England and recorded one of his most successful albumsTomorrow, which featured his hit single “Bring Him Back Home” (The him, of course, was Nelson Mandela). Five years later, in 1990 following the release of Mandela, Masekela was finally able return to South Africa.

This re-issue ofLive in Lesothois resurrected and licensed from the archive of David Marks. He donated hisHidden Years Music Archive Projectcomprising ten tons of musical history from 1957–2005, to the University of Stellenbosch.

The album is available December 2, 2019,on Matsuli Music.