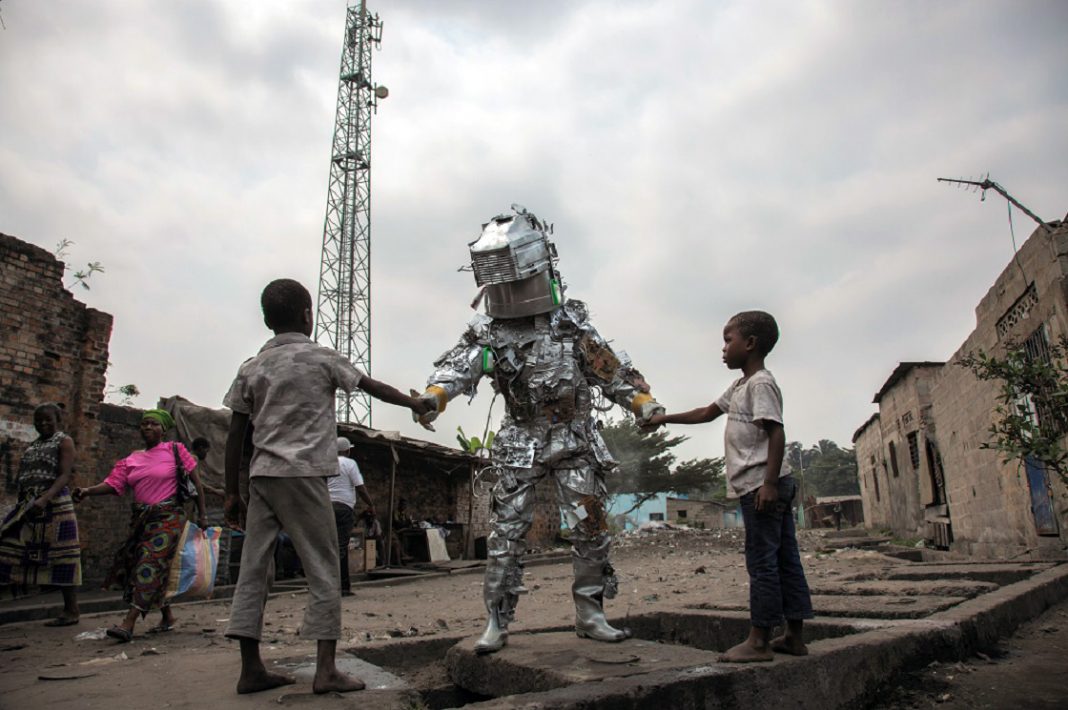 “Art is dead, if the expats leave the country tomorrow,” says Junior Moka, a professional photographer, before sitting down resignedly. His comment may seem to be a bit of an exaggeration, especially in Kinshasa, the vibrant capital of the Democratic Republic of the Congo, where art is everywhere. To paint here, there is no need for expensive paint brushes to give free rein to your inspiration, no need for an official scene, the streets are there and the chaos that reigns in them produces both inspiration and the objects needed for creation.

The body can even become a canvas sometimes, or media, depending on the performance. Like the Tin Can Man who wanders the dusty streets of Kinshasa from time to time, leaving intrigued people trailing in his wake. Made from tin cans picked up in the street, the costume and performance are the work of Eddy Ekete. “Tin Can Man is both a superhero and a way of making people aware of the environment and the lack of cleanliness. He is made of trash, he is loud, he attracts everyone’s attention,” the artist tells Equal Times.

Today, the 42-year-old artist lives in Paris, but he left his costumes in Kinshasa at the artists’ cooperative that he created, Ndaku Ya la vie est belle, where other artists bring it to life. Junior Moka is part of this collective. He is responsible for promoting artists.

Yet it wasn’t that long ago that being an artist in the Congo was a guarantee of respectability. In the 1970s, the autocratic leader Mobutu Sese Seko introduced his programme of ‘Zairianisation’. The aim was to restore African authenticity to the country and to erase the traces of western colonial domination. The process also involved the promotion of the arts. Mobutu created the Cultural Promotion Fund (FPC) which subsidised cultural projects by taxing advertising, and the Mobutu Sese Fund which granted an allowance to elderly and ailing Zairian artists. Art thrived and artists like Chéri Cherin, Moke, Chéri Samba became real stars in the DRC and internationally.

But today Mobutu is gone and the country has been bled dry. In December 2019, the United Nations Development Program (UNDP) ranked the DRC among the bottom 10 countries in the human development index (HDI), making this country one of the poorest in the world.

The FPC is no longer active and art no longer earns its creators as much money nor does it enjoy the same level of esteem. Also, priorities have changed. Young Congolese prefer to turn to more lucrative sectors such as law or commerce. “Here, for parents, having a child who makes art for a living is like sowing in the desert: it doesn’t bring in anything,” adds Malafi, artist and initiator of the Festival International des Sonorités de Kinshasa (the Kinshasa Interrnational Sound Festival).

In this land 80 times the size of Belgium, there are only two national museums. A stroll through the National Museum of Kinshasa reveals that it is not contemporary artists who are exhibited, but artefacts from another time. It is difficult therefore to make the population aware of contemporary visual arts. “We are not valued here, yet internationally we are recognised,” says Ekete. “The people of Kinshasa don’t know who we are.”

To bring art back to the streets, many have turned to performance. “A performance aims to make the audience react, but also to provoke, to make people think.” Performances for which artists are paid by passing round a hat, while sometimes they get nothing at all. To make a living from their art, artists turn to another audience. “We create for everyone, but those who can afford to buy our work tend to be expatriates rather than nationals,” says Moka.

“In Kinshasa, even for those who have studied fine arts, we do not know how to seek funding. We are artists, we know how to express ourselves through our art, but we do not know the administrative side that would allow us to earn a living thanks to subsidies,” says Ekete.

These international institutions offer funds, calls for projects, and also international residencies. For an artist, going into residency is an opportunity to sell their art and to make themselves known internationally, but not only that. “When I went to France, I realised that in fact a lot of our work is there, we meet other artists, it opens us up to a whole new window of inspiration.”

Not to mention that Congolese works of art are being taken around the world, and being shown in major museums in Paris, Brussels and New York. For the country, it is also an opportunity to show another image of itself, other than that of a war zone.

Living off your art

Once exhibited, they can sell their work and start making a living from their art. But in the meantime, many live in poverty. “Most of the time, artists work in the informal economy, they don’t pay tax and social security, so they don’t have a safety net, like when they get sick,” explains Shaka Kongo, the main coordinator of the Artist in Danger association.

Because in Kinshasa, care is expensive. “In my health centre alone, [Editor’s note: which is not in an upscale part of the capital], just to have access to the consultation, you have to pay for the health card which is US$5. If then you have something like an X-ray or a scan, the bill quickly mounts up. Recently, I had an operation for venous insufficiency. It cost me US$1,500 for each leg, not including hospital costs. Not everyone has that money,” Kongo tells Equal Times.

According to the World Bank, in 2018, the average Congolese person lived on less than $2 a day. A situation that has not improved since, even less with the health crisis caused by the coronavirus. Furthermore, many Congolese have given up seeking healthcare.

It’s a situation that can have dramatic consequences. “Last month I was told that one of the artists I work with was in bad shape. By the time I got there to take him to the hospital, he was already dead, on the ground, in the street. We had to transport him ourselves to the morgue in a cart,” says Kongo. “I knew he was sick, when I saw him four days earlier he had a fever, he was shaking.”

Today, he doesn’t know what illness took the life of his protégé, but for him, the fever is not solely responsible. “The Congolese state is complicit in making Congolese artists live like tramps. Today they are dying on the streets and that is not normal.”

Government budget cut in half

His frustration is shared by Jean-Marie Lukundji, the Congolese Minister of Culture and Arts. “For as long as the Congolese government does not invest in culture, it is difficult to encourage our home grown artists,” he admits. “Take an artist like Freddy Tsimba. If you go elsewhere you will find his work, but in our own museum none of his works are to be found. That’s the paradox. That is not normal, and we have to put it right.”

In a speech setting out his government’s programme, however, addressed to the population in September 2019, Prime Minister Ilunga Ilunkamba made the promotion of culture his 15th policy goal: “I will instruct the ministers concerned to take all measures to consolidate this culture at all levels… [we, the government] aim to make culture and the arts truly one of the levers of economic diversification, ” he said at the time.

Unfortunately, this goal is not backed up by the financial means to achieve it, says Lukundji: “Only 0.16 per cent of the general budget is devoted to culture. What can we do with that?” And that is without counting the budgetary problems the country is experiencing. Despite being rich in diamonds and precious minerals, this February the government’s budget was cut by half, following the collapse in cobalt prices on the world market (of which DRC is the world’s largest producer).

It was a blow that was quickly followed by the Covid-19 pandemic, which is currently plunging the world economy its “deepest recession since the Second World War”. At the Ministry of Culture, Lukundji has felt the effects. “The implementation rate of this budget does not even exceed 30 per cent, so we do not even really have access to this 0.16 per cent”.

It is also a way for companies to attach their brand to recognised artists. At Bracongo, the local brewery, the idea has caught on. Since 2015, it has offered a grant and a residency to visual artists through a competition. And that’s just the beginning.

But since then, the Covid-19 pandemic has arrived in Kinshasa, canceling competitions and international residences, accentuating the country’s structural and economic problems. For the art scene, this can stimulate creativity, but the question of how long it can survive in crisis mode still arises.

This story has been translated from French.

Nicola Hiexe is a freelance journalist based in Kinshasa in the Democratic Republic of Congo. She specializes in social, economic, and environmental issues.