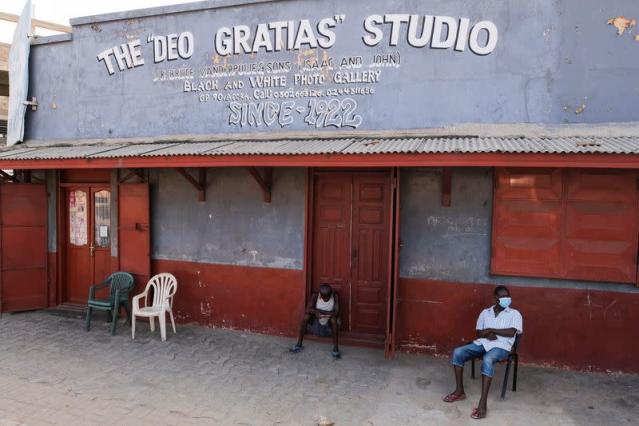 Local photographer J.K. Bruce-Vanderpuije opened a small studio in the then-colonial capital Accra a generation before the Gold Coast became Ghana, where his family would become the de facto visual historians of a nation that had not yet been born.

Three generations of Bruce-Vanderpuijes have painstakingly amassed the world’s largest collection of 20th century Ghanaian photographs under one roof for the past 100 years. They believe their Deo Gratias photo studio is West Africa’s oldest.

The family’s 50,000-image archive offers a unique glimpse into Accra’s transition from a colonial port to a bustling modern metropolis, from glass plates to digital files of nation-shaping events to intimate personal portraits.

“The story they tell is the story of [Ghana’s] history,” said Kate Tamakloe, Bruce-granddaughter Vanderpuije’s and the modern archive’s keeper. “There is no future without a history.”

Deo Gratias has remained virtually unchanged since it first opened in 1922 on a busy street in the heart of Jamestown, the capital’s oldest district. Grainy old photos show that the area was much quieter before traffic and billboards clogged the streets.

The faces of local families, as well as famous musicians, politicians, and patrons, now adorn the walls of the studio. A black-and-white photograph of Ghana’s first leader, Kwame Nkrumah, hangs alongside others of Britain’s Queen Elizabeth and disgraced American President Richard Nixon.

“Pictures speak volumes, louder than words,” said Daniel Tetteh, a Ghanaian historian who works as an archivist for Deo Gratias. “If we do not preserve them, the nation’s memory will be lost.”

Tamakloe took over Deo Gratias when her father, photographer Isaac Bruce-Vanderpuije, who inherited the studio from his father J.K., began to lose his sight. What began as a mission to digitize the archive has evolved into a full-time job, which she hopes to pass down to the next generation when the time comes.

Kate and Isaac sat in a lush garden outside the capital, flipping through an album of their favorite prints. One image showed J.K. perched elegantly atop a race horse. Another image showed a young and happy Isaac pointing his camera at an unknown subject.

“One must be proud that something has been preserved for 100 years, and the next generation will see what has happened,” he said, gripping his cane as Kate smiled. “And I don’t think that’s the end.”

Frida Kahlo: A Ribbon Around A Bomb