Home Culture Frida Kahlo: A Ribbon Around A Bomb 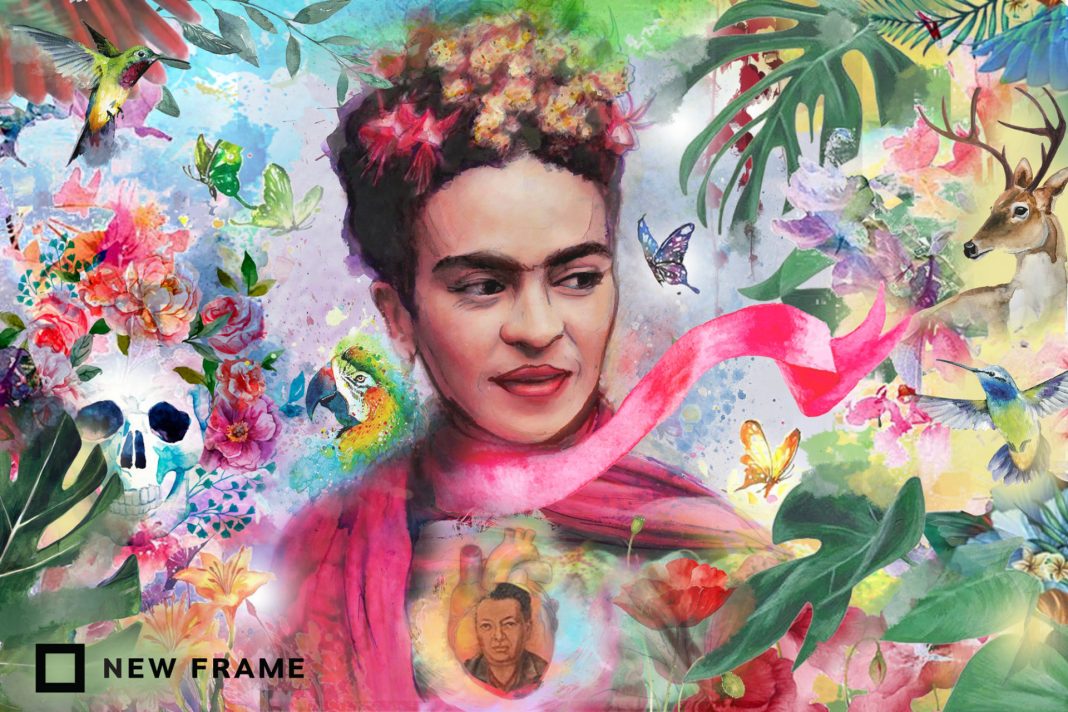 In this extract from her recent lecture at the Joburg Contemporary Art Foundation, Helena Chávez Mac Gregor reckons with the memory and place of Frida Kahlo in our contemporary imagination.

Writing about Frida Kahlo is difficult. So much has been said, her work has been examined in the light of her letters, her house, her clothes, her personal belongings, her relationships, her suffering. What else can be said?

I am part of a generation that watched her become a celebrity, a condition in which she stopped being Frida Kahlo and simply became Frida. The movement, which emerged in the 1980s and gained unprecedented force in the 1990s, not only aimed to make visible the work of a female artist who was already dead – as was the case of María Izquierdo or Leonora Carrington – but also to transform her into a kind of symbol. A symbol of what, I am still not sure. A symbol of fashion, a country, an identity, an economy.

We saw how, while the country’s dreams of social justice collapsed, she was exoticised. Her work, both material and the rights, is safeguarded by Mexico’s central bank, Banco de México, by a trust created by Diego Rivera before his death. Her image, the image of her own self, her persona or whatever resembling it, is safeguarded by the Frida Kahlo Corporation managed and monetised by what is left of her family.

My mother lives on the street where the Casa Azul Museum is located, in the traditional neighbourhood of Coyoacán, south of Mexico City. Every day I see hundreds of people lining up to get in. Many, in fact, are satisfied with taking selfies at the door of the house where the painter lived from her birth in 1907 until her death in 1954. My daughter, who is now five and has grown up in museums while I set on exhibitions and her father exhibits his pieces, the only artist she recognises is “Frida”. She recognises her on T-shirts, dolls, television commercials. She identifies her face; the artwork slips from her. She can’t tell whether she likes it or not.

There is so much in sight that, I realise, it slips from me too. I wonder why is it that in order to value Frida Kahlo’s work, her life has been scrutinised? Why has it been interpreted from her biography? From an interpretative psychology yearning to find, in each shape, stroke and colour, the key not only for her work but for herself; as if there were a hidden secret that we have to decipher in order to grant dignity to a work and a life. Has any male artist been subjected to this treatment?

Undoubtedly, the fact that her body of work is mostly self-portrait has “authorised” the idea that her work is a way of introducing herself, and therefore we can and must reveal her, find what she represents, as the other part of the symbol that she sustains and signifies. Under the dynamics of celebrity, commodity and complete transparency, some of her work’s political powers and readings have disappeared.

I confess, in the face of saturation, I could see nothing. There was the obvious and I wasn’t interested in looking at it or to see if I could find something else. It was this invitation, coming to speak here in Johannesburg, that forced me to look, and I found a world.

As Roland Barthes decreed long ago, my generation was also formed by the death of the author. This does not mean that the contexts of production and life do not matter; on the contrary, as Foucault would later show, there is no way of understanding either words or things without the historical conditions that open them up. This principle does mean that seeking the meaning of an action or production from the intention of a founding consciousness is a false problem. What Frida Kahlo was – what she wanted, thought, desired – is, fortunately, beyond my reach. What I have at hand is the work, the texts, the critical possibilities existing in her work. The work is not an absolute category either, but rather a device open to different interpretations and readings, hence the importance of not fixing it in the author.

What I am interested in doing here with you is to be able to understand the body, or a certain body, of her work; to analyse what it opens up, from where, towards what it is directed. What I can do is try to interpret the work in the light of my own interests, which in recent years have revolved around feminism and motherhood, and from there, try to see beyond Frida, the art of Frida Kahlo.

Politics, The Invention Of A Revolution

Frida Kahlo’s production, both of her work and of herself as a public figure, is part of a period of upheaval and national transformation. Born in 1907 – although she liked to say that she had been born with the beginning of the Mexican Revolution in 1910 – she was part of a project, never unified and rather ambivalent, contradictory and in dispute, of shaping the modern nation emerging from the turbulent revolutionary process. A process that some historians mark from 1910 to 1938, when the presidential programme was consolidated with the government of Lázaro Cárdenas.

In this long period, art, and especially muralism, played a leading role. It gave shape and support to the dreams of several revolutionary processes, as well as its sedimentation as a national project in different governments. It was a way of being seen, of making visible. It was a way of entering modernity and pointing out where progress should lead.

From a wealthy family, Frida, unlike many other women of the time, studied at the National Preparatory School, with the intention of later starting a career in medicine. There she not only had an education in the progressive “spirit” of the time, but also had very close relationships with people like Alejandro Gómez Arias, a writer who, after their relationship, played an important role as a leader of the student movement of 1929. There she also met Aurora Reyes, a communist muralist with whom she had a deep friendship for the rest of her life

Her letters of the time show her knowledge of political events, although they do not establish any radical position regarding them. Her encounter with Diego Rivera in 1928 marked her entry into a political programme, one that shared the movements and ideologies of the time but also had elements of its own, which they not only shared but, I think it is fair to say, they invented and nurtured together.

I think it can be said that Rivera was one of the most important aesthetic and political organisers of the modern process in Mexico. Part of the project was to generate a platform for propagandistic indoctrination that, through art, would generate a common representation. A figuration to follow. To give a perspective on the importance that this movement, or this series of movements, had in the country, I find this comment by Lacan interesting.

Self-portraits are a strange device; they are undoubtedly a way of representing oneself, but that presentation does very different things throughout history. In the book Seeing Ourselves, Women’s Self-Portraits, Frances Borzello writes that self-portrait could be considered, owing to its importance in the history of art, as a genre itself. And that women’s self-portrait specifically, because of the historical conditions of women’s representation, presents a vital space for the artistic work and agency of female artists.

The self-portrait of women is not exempt from prejudices that attempt to relate this affinity with the personification of the vice of vanity without considering the different operations it has served. From the development of techniques and skills, to the need to make oneself appear either as a personal gift or as a public act. The self-portrait has been a substantial space in art not only to be seen but to present how we see, feel and find ourselves. A double not only implying an externalised interiority but that can also be the presentation of historical conditioning, ruptures and desires.

Although the self-portrait of women has a long history, dating back to the 13th century, it was in the 20th century when it became a substantial tool for social exploration and political critique, where ambiguities, tensions and possible futures of the representation of women emerged from new subjectivations outside the capitalist and patriarchal mandate. This is where Kahlo’s operation and research steps in, she exteriorises while also projects. It is a complaint as well as a demand.

In her analysis of the history of the female self-portrait, Borzello states about Kahlo: “No artist, male or female, has produced a body of autobiographical work to match its originality.”

The statement must be true; however, it seems to me that radicality here lies not only in the originality of Kahlo’s work but in what the conceptual operation of portraying herself throughout her life sustains. Not only from the moment she began painting, that is, when she was 17 years old, but when recreating her life in these presentations.

What I think these paintings do, beyond establishing an autobiography, is to open up the personal and the self-representation to the complex social and historical construction of being a woman. Of being a woman in Mexico at the beginning of the 20th century, of wanting to participate as an emerging political subject, of being subject to the gender and romantic mandates of the time – which have changed a little, but not much. And, at the same time, being free or wanting to be free in order to become what one is and also what one is not. To be what one is not yet, but that by presenting it, is someway already being.

Helena Chávez Mac Gregor is currently the Academic Curator of the MUAC, University Museum of Contemporary Art in Mexico City