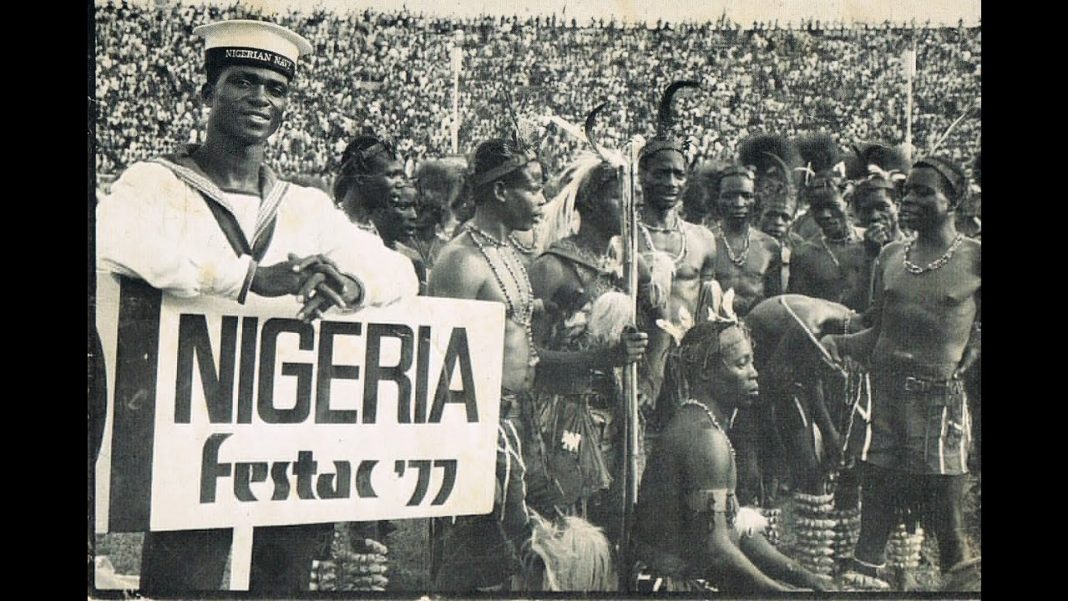 Staged in Lagos, Nigeria, Festac 77 (The Second World Festival of Black and African Arts and Culture, to give it its full name) was the cultural climax of the Pan-African movement, gathering musicians, dancers, fashion designers, artists, and writers representing 70 countries from Africa and the African diaspora. It was a show of worldwide black unity and self-determination, and the catalyst for Nigerian superstar Fela Kuti’s anti-government protests. It was also the platform for Stevie Wonder to consolidate his affinity with the continent.

Festac 77 was big on a more prosaic level, too. Indeed, to even call it a “festival” in the contemporary sense would be doing it a disservice – this was Olympic Games scale. Four weeks of events across 10 venues including the specially built 5,000 capacity National Theatre; 15,000 participants housed in 5,000 high-end apartments and two luxury hotels, again all built for the event; a network of highways created to avoid Lagos’s legendary traffic congestion. It was 12 years in the planning, during which time it survived a civil war, a presidential assassination and two coups (one successful, one not) and the bill came in at $400m, or $1.75bn in today’s money.

The cost itself was a subplot: oil-rich Nigeria had staked a claim as the “Giant of Africa” and such largesse in the cause of African unity ticked several boxes. Festac’s international co-ordinator, professor Chiki Onwauchi, said at the time: “Billions are being spent keeping black people apart – it is impossible to spend too much money to bring black people together.”

The event brought in performers from all over the globe. Among the musicians were Americans Sun Ra, Donald Byrd and Archie Shepp; Gilberto Gil from Brazil; from the Caribbean, the Trinidad All-Stars Steel Band and calypsonian the Mighty Sparrow, whose performance left behind a Nigerian craze known as discolypso; Miriam Makeba from South Africa; and Osibisa, the African/Caribbean funk band from London, part of a UK delegation that, in the opening ceremony, paraded around the National Stadium’s track behind a banner announcing themselves as “Black People of Great Britain”.

Such a sense of liberation was conspicuous from headliner Stevie Wonder, at the time coming off the back of five-year run of five ground-breaking albums, and among the biggest stars on the planet. He’d been exploring his African roots for a few years – he’d even made plans to move to Ghana in 1975 – which the Festac crowds appreciated. Mirian Makeba, his appointed guide, spoke of how he was “looking like an African, his hair all braided with beads”. In fact the Talking Book album had struck a particular chord with the Festac crowd and when he closed the event at the final show, coming on after Makeba, the audience made him perform Superstition six times.

Stevie Wonder stayed on in Lagos after the festival closed, when, with Makeba, he organised a satellite link to receive his four Grammy awards for Fullfillingness’ First Finale live from Lagos. Their plan was to bring Festac to international attention, after the world’s media had largely ignored it. Unfortunately, the singer’s appearances were largely remembered for crooner Andy Williams (who was presenting the awards show) asking Stevie Wonder: “Can you see us?”

Not everybody offered such endorsement of the event, however. Fela Kuti had, understandably, been on the organising committee, but resigned after objecting to an army general rather than a creative at its head, and in protest at the enormous sums of money being spent, not all of it for the benefit of the festival itself. He distributed an angry newsletter condemning how it was being organised. In tandem with the popularity of Fela’s modernisation of highlife – he dubbed his new sound Afrobeat – this served to galvanise young Nigerians against their rulers’ perceived corruption and cultural manipulation.

By way of protest, during the event he hosted a more or less continuous live music extravaganza at his nightclub-cum-residential-compound the Shrine, and it became the place to be, an alternative Festac as musicians ignored official events and receptions to hang out and jam with Fela. Stevie Wonder was a regular, as was Sun Ra and Osibisa. Combined with the star’s nightly blistering onstage attacks on the government, this became something of an embarrassment. After Festac had closed and foreign visitors departed, the army stormed the Shrine, beating people, raping women and trashing property – the singer’s 77-year-old mother was thrown from a first-floor window, never recovering from her injuries. Fela found his calling as a revolutionary leader. Meanwhile, the planned Third Festac (Ethiopia, 1981) never happened; Stevie Wonder’s quest for his roots cooled and cultural pan-Africanism suffered a huge setback.

Thankfully, it wasn’t a fatal blow. In 2019, Skepta’s manager Grace Ladoja, London-born of Nigerian heritage, organized Homecoming in Lagos, a cultural festival with the accent on music, celebrating African and African-diaspora arts, intellectualism, and ideas on a far more manageable scale. The spirit of Festac, where Wonder so deftly knitted together the two sides of the black Atlantic, was alive once more.