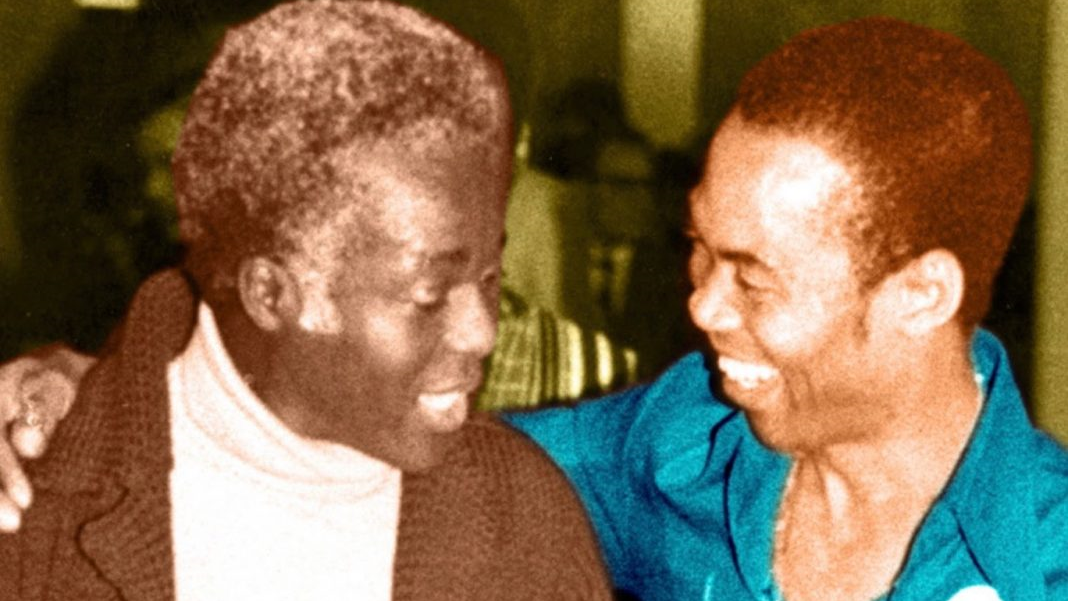 Fela Kuti’s friend, Carlos Moore, the black Cuban emigre writer, is the subject of a film about their at times difficult relationship. The result is complex.

Twenty-two years after his death of complications from AIDS, Fela Kuti stands as one of the most documented, analyzed, and celebrated African artists in any medium. There have been at least seven books in English and three feature-length film documentaries, Music is the Weapon, Finding Fela and now, My Friend Fela. In 2003, the New Museum staged an exhibition of contemporary artworks inspired by the artist (The Art and Legacy of Fela Anikulapo-Kuti), and 2008 brought Bill T. Jones and Jim Lewis’s Broadway musical, Fela! (whose production is documented in Finding Fela). To be sure, Fela deserves this volume of attention, both as stylistic innovator, whose Afrobeat funk changed global pop music, and as fiery activist—the “Black President” who continues to inspire insurgent movements by the likes of Uganda’s Bobi Wine. Yet, as the Fela retrospectives pile up, one wonders what new perspective on the man and his times each new contribution can possibly bring.

As its title suggests, My Friend Fela (directed by Joel Zito Araújo) is a highly personal account, meditating not only on the artist, but also on the intersection of Moore’s own eventful life and Kuti’s. Born in 1942 in Cuba to Jamaican parents, Moore moved to New York and immersed himself, under Maya Angelou’s tutelage, in the Black liberation struggle. He eventually became one of Malcolm X’s closest assistants in charge of security and logistics—his “everything man,” in Moore’s words. In 1961, following the assassination of Patrice Lumumba, Moore organized a groundbreaking black sit-in protest at a UN Security Council session. Footage of this event appears in the film, along with rare footage of Malcolm X in Paris.

After Malcolm’s death, Moore met Fela and the two bonded over their shared commitment to Black radical politics, with the more politically seasoned Moore filling Kuti in on what he was eager to learn. In 1982, Moore published, in French, Fela: This Bitch of a Life, the first biography of the artist, which, in various translations, did a great deal to raise global awareness of Kuti. In 2010, Moore made news when he filed a lawsuit against “Fela!” the musical, claiming that substance from his book had been used without his consent or knowledge. In 2012, a settlement was reached: all future promotional materials for the production would include the phrase “inspired by Fela: This Bitch of a Life by Carlos Moore.”

In his new film, Moore vows to “set the record straight” on Fela: the Nigerian was no mere “cultural icon” or “ghetto hero,” but a man who “challenged the whole moral basis of the society in which he was involved.” It is not clear whom exactly Moore is defending Kuti’s reputation against—most of what is said today about the artist/activist seems positive, even adulatory. Indeed, given Fela’s increasingly legendary status, I for one welcome depictions of the artist that take his complex, flawed personality into account along with his genius.

One valuable recent contribution in this vein is the 2013 autobiography by Tony Allen, Fela’s drummer and the most important co-inventor of the Afrobeat style (co-written with Michael E. Veal). In his book, Allen expresses deep admiration for Fela the artist and visionary, yet he does not neglect to recall his frustration with Fela’s “politics business,” which “sometimes … took the whole night” to the displeasure of audiences and his fellow performers. For Allen, Fela’s political propensities were a mixed blessing: on the one hand the Black President was bravely saying things that needed to be said; on the other, it was sometimes impossible to disentangle Fela’s anti-government tirades from what Allen calls the “ego-tripping” side of his personality. Whether or not one agrees with Allen, his measured, multifaceted assessment of Fela the man is honest and historically valuable.

Moore allows a complex image of Fela the man to appear on screen, but there are times when his mission to elevate Fela and defend him against unnamed critics keeps such a nuanced portrait from emerging. This is most pronounced in Moore’s interview with Sandra Iszadore (formerly Sandra Smith). Iszadore, whom Fela met in California when he first traveled to the United States in 1969, powerfully kindled the young Nigerian’s political awakening, in much same way that Angelou kindled Moore’s. Her appearance in My Friend Fela is one of this documentary’s unique assets, yet it is marred by Moore’s leading and unnecessarily combative interview approach. He presses Iszadore hard on her decision not to join Fela’s polygamous household in Lagos. Choosing her words carefully and with some reluctance, Iszadora explains “I chose not to be a part of the harem.” Moore then sternly corrects her: “No. Polygamy is not a harem! And that’s why I say poly-conjugality.” Whatever his views on Fela’s polygamy, Moore might have shown more deference to Iszidora’s depiction of what was, after all, her own experience. Rather than trying to defend Fela’s actions and attitudes with words like “poly-conjugality,” Moore could have listened receptively to what this key person in Fela’s life had to say. The interview remains informative, and some viewers may be less bothered by Moore’s domination of the frame; “My Friend Fela” is, after all, a film which purposefully and unapologetically puts Moore front and center.

This is as much a film about Moore as it is a film about Fela, and viewers will likely appreciate the film to the degree that they are interested in Moore (as many likely will be, given his rich history as an activist and writer). There is not much new, unseen footage of Fela here, and the film draws heavily on Jean-Jacques Flori and Stephen Tchal-Gadjieff’s indispensable 1982 documentary Fela: Music is the Weapon for material. Viewers who already know that film may find themselves waiting impatiently for unfamiliar shots to appear. Given the title, one might expect a narrative focus on an evolving and complex friendship between Moore and Kuti, with their two oversized, uncompromising artistic personalities. Werner Herzog did this with great success in his similarly titled My Best Fiend, about himself and Klaus Kinski. Moore and Kuti’s actual personal relationship, however, seems not to have been eventful enough to serve as the central narrative axis for this film.

My Friend Fela is more about Moore’s re-imagination and theorization of two parallel and intersecting black lives in a time of political and artistic ferment, one beginning in Cuba, the other in Nigeria—both finding new meaning in the struggles of the United States. Taken as such, it makes for rewarding viewing.