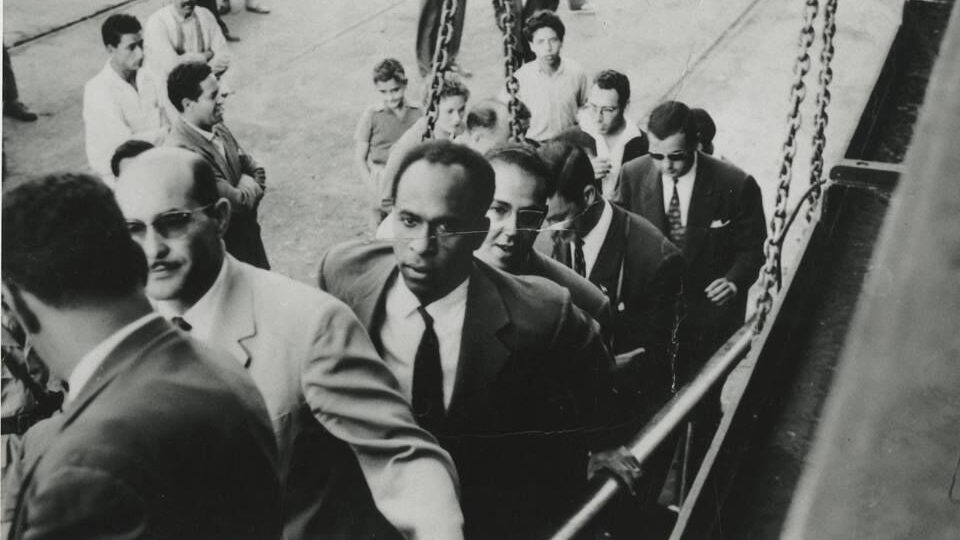 The works of Frantz Fanon can be read as architectural renderings of rights, futures, and generations toward a “very different Afro-futurism.”

We must work and fight with the same rhythm as the people to construct the future and to prepare the ground where vigorous shoots are already springing up … The problem is to get to know the place that these men mean to give their people, the kind of social relations that they decide to set up, and the conception that they have of the future of humanity.

In a fine story from Toni Cade Bambara’s The Seabirds Are Still Alive, a character named Jason says to another: “We need a lesson on architectural design.” He starts to clarify by saying, “the politics of …” but his co-teacher and comrade, Lacey, completes his thought in automatic, absolute agreement. Together they operate a community school for black children whom they are trying to walk home, one at a time, across a landscape made more bleak and white by a strangely brutal climate change—Arctic snow in the ’hood (highly symbolic, needless to say).

This brilliant narrative set-up allows Bambara to supply wicked commentary on contemporary black-white spatial dynamics in architectural white America. They return from an African art exhibit at some museum to survey an enemy cathedral lording over their tenement confines; a man-made lake fabricated to elevate rents as well as some rich white ego; and some new cement school built like a prison intimidating their neighborhood, which—after recent counter-insurgent reconstructions—today lacks all “territorial control,” any semblance of “a sovereign place.”

The revolutionary schoolchildren in this story represent a future one must fight for, the assumption of their right to any future at all, and a future of their own making and design. The narrator states over and again, till the very end of the tale, “I’d like to meet the characters who designed these places … in any alley … with my chisel.” Both teacher and wannabe “assassin” now, Bambara dreams of the revolutionary violence (or counter-violence) long associated with Frantz Fanon—whom she also recalled in her classic “On the Issue of Roles” from The Black Woman: An Anthology.

The Fanon of Toward the African Revolution wrote regularly about the “rights of peoples” over and against the “rights of Man” within his extended, extensive quest for a new humanism “made to the measure of the world.” Often cast as a prophet in hindsight, he wrote routinely of history and the future, not to mention generations, as he launched his prescient critique of neocolonialism with its “puppet independence” masquerading as bona fide liberation and decolonization.

After all, besides those who can only read a certain set of pages from Black Skin, White Masks in a most specific fashion, what consumers of “critical theory” cannot recall this one line from The Wretched of the Earth: “Each generation must out of relative obscurity discover its mission, fulfill it, or betray it.” Many never reach the end of the same paragraph, it appears: “As for we who have decided to break the back of colonialism, our historic mission is to sanction all revolts, all desperate actions, all those abortive attempts drowned in rivers of blood.”

On closer scrutiny, however, Fanon is seen to deploy this forward-thinking generational idiom all across this classic book, which straddles the limit between the mortal and the posthumous-immortal, textually, toward a very different “Afro-futurism” to be sure.

The idea that a generation or more not yet born could, let alone should, have rights of any sort would sound counterintuitive insofar as it is meant to give voice to an alternate intuition or mode of thought. Yet, this is exactly what is found in Fanon. It is easy to retrace his meditations on human as well as non-human architecture, whether spatially or metaphysically speaking, perhaps especially between the “Pitfalls of National Consciousness” and “On National Culture” chapters of The Wretched of the Earth, which is hardly to exclude the statuesque chapter simply entitled “De la violence” or previous books and writings.

Plainly, The Wretched of the Earth was on a mission of the future for present and future generations from the start. Early on, Fanon succinctly defines the “historic mission” of the “national middle class,” which was “that of intermediary”—mere “middle-men.” This idea plays out like a militant musical refrain in Fanon who writes that the leaders of this elite “imprison national consciousness in sterile formalism” (as if the subject were art or architecture, interestingly). The people are left in need of a plan of thought and action that can give satisfactory “form or body” to this consciousness and its foundations. Rather architecturally still, he notes:

Then the flag and the palace where sits the government cease to be the symbols of the nation. The nation deserts these brightly lit, empty shells and takes shelter in the country, where it is given life and dynamic power. The living expression of the nation is the moving consciousness of the whole of the people; it is the coherent, enlightened action of men and women.

Deposing abject leaderism, Fanon climaxes this key dimension of his thought with a new arrangement—whereby the “duty” of those at the head of any movement is “to have the masses behind them.” To enter history is to have a future, a future with rights to human being, no less, as heretical as this notion turns out to be. It is not to emulate European men who like their neocolonial “intermediaries” have also “not carried out the mission which fell to them.” Undeniably, this was and is a work threaded by futuristic concerns for the generations to come.

What’s more, another central element of a “rights of future generations” motif was launched in Fanon’s El Moudjahid articles in the late 1950s and so throughout the polemical texts collected as Toward the African Revolution, arguably the least-read Fanon among academic critics in the West. Here we encounter the “rights of peoples.” Constantly, he shifts the point of analysis from individuals to peoples—populations, in the plural. The “humanism” of France’s Declaration of the Rights of Man and of the Citizen is denounced, exposed, discarded. It is to be replaced, in Fanon’s epic, epochal mission, by a new humanism vested with the “rights of peoples,” which he elaborates as the “right to self-determination.” This would be the “right of peoples” to selfhood or peoplehood itself. The cyphering of “peoples” appears many times and many ways in Fanon to redraft basic philosophical conceptions for every phase of this liberation struggle …

As it stands, Fanon may not be known for “designing or constructing buildings” in this or that metropolis, but he began his first book with reference to the architecture of his “sociogenic” work. He went on to transform the architecture of psychiatric treatment in the most literal, logistical terms in Blida, Algeria—a spatial practice of “ergotherapeutic” innovation which persists there, in a new century, on the hospital grounds now named after him. It compliments his prosaic treatment of engineers, statues, ports, airdromes, bridges, palaces, urbanity, and the symbolic Casbah, for starters. Some etymologies of “architect” or “architecture” denote “weaving” or “fabricating,” as in the crafting of written or spoken texts. They can also invoke “one who plans or contrives” anything, as in one who plots like Fanon in a conspiracy of worldwide revolution, anti-colonial and anti-neocolonial alike. This is not the “architect” as “construction supervisor” or “director of works”—some “master builder.” This would be “architectonics” of poiesis and revolution and so arguably maroonage: Fanon rethinking our whole atmosphere as the architect of rights, futures, generations.

“I’d like to study the brains of these planners up close …” says Toni Cade Bambara’s cityscape narrator for the “Broken Field Running” story from her The Seabirds Are Still Alive collection: “… Forceps in hand.” One of her schoolchildren asks what they will do with “that ugly school” with the cyclone fence built to intimidate and incarcerate their neighborhood-community, that is, after their new day has come. The reply is that it should take place as a wing of the “Museum of the Revolution … We can put the ‘Crimes against the People’ section in it.”

To no small extent, these youth signify the element that would grow up to be hip hop and come to represent pan-African Fanonism of and for future generations: La Rumeur in France, for instance; Moonaya and Nix of Senegal with Fatou Kande Senghor’s Wala Bok projections; Lauryn Hill voicing Concerning Violence so spectacularly in cinema with a related concert tour to follow; MC Majnoon and El Herraz Nomade in Algeria—besides Donquishoot and Diaz of MBS, who spit “La Bataille d’ Alger 2016” and then loop clips of Gillo Pontecorvo’s iconic film for a truly stunning music video. The rights of present and future generations get writ large. The circumstances are dire, yes. The stakes of the “historic mission” are no less unclear.

As Huey P. Newton of the Black Panther Party once wrote, “The greater and more immediate problem is the survival of the entire world. If the world does not change, all its people will be threatened by the greed, exploitation, and violence of the power structure.” The revolutionary Black Radical Tradition, young or old, is no slouch on the matter of human-architectural preoccupations. And then there’s that self-styled “Marxist-Leninist-Maoist-Fanonist,” George L. Jackson:

We have a momentous historical role to act out if we will. The whole world for all time in the future will love us and remember us as the righteous people who made it possible for the world to live on … I don’t want to die and leave a few sad songs and a hump in the ground as my only monument. I want to leave a world that is liberated from trash, pollution, racism, nation-states, nation-state wars and armies, from pomp, bigotry, parochialism, a thousand different brands of untruth, and licentious usurious economics.