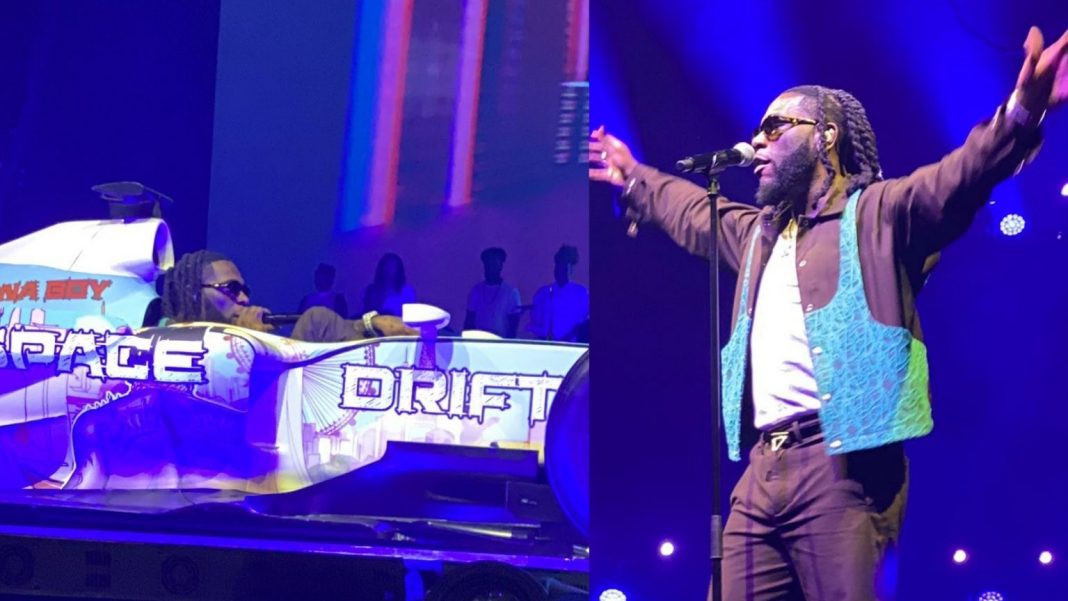 Nigerian Afrobeats star Burna Boy burst onto the global stage in 2018 with a slew of irresistible hits on his third album, Outside, accompanied by mandatory fiendish good looks and charm. Grammy and BET awards helped firm up his status within a highly competitive global music industry.

Before his international success, which has been cemented by his latest offering Love, Damini (2022), Burna spent years experimenting with different sounds in London and South Africa and his ragga-inspired vocal style became distinctive.

His 2014 contribution to South African hip hop mainstay AKA’s infectious song All Eyes on Me first put him on the African radar. His smouldering hook on the multiple award-winning track made all the difference and demonstrated he was an artist to watch, channelling both West African and Jamaican musical flavours.

Although he was deemed talented by his South African hip hop peers, his shine remained somewhat muted. He had to return to his native Nigeria to attain the level of success he obviously yearned: awards, global tours and A-class industry connections.

Although he rose in a whirlwind, with an enigmatic combination of singing styles and influences, Burna Boy has, at least for the moment, become mainstream; a slightly compliant agent of the commercial music industry. (The same is true of most of today’s Afrobeats stars, even if this is a Faustian truth everyone might choose to ignore.)

On Love, Damini (he was born Damini Ebunoluwa Ogulu) Burna still exudes just the right amount of foreboding and palpable intrigue to remain credible as an artist. But how much of his much-touted originality does he have left? Perhaps a way to begin to answer this question is to revisit his musical influences.

It is difficult not to love club bangers such as Soke, Ye, Gbona and On the Low, all produced before Burna Boy’s groundbreaking 2021 Grammy win with his fifth album, Twice as Tall (2020).

In most of these songs, Fela Kuti’s influence is crystal clear in samples and the unequivocal lifting of various hooks. For many, it seemed like Burna was Kuti’s heir apparent.

From the late 1960s Nigerian musician and singer Kuti, along with his amazing bands, almost single-handedly pioneered a genre called Afrobeat. This sound incorporated strong Pan Africanist politics, intricate call and response singing, and heavy West African drumming laced with enticing jazz and funk riffs. Afrobeats is an umbrella term for a more radio-friendly and commercial version of Kuti’s Afrobeat.

Burna Boy’s Kuti credentials appear impeccable. His maternal grandfather, the broadcaster and jazz enthusiast Benson Idonije, had managed Kuti in the 1960s. In one interview, his mother and manager, businesswoman Bose Ogulu, reportedly refers to Kuti as the closest thing she had to a godfather.

Burna has also been influenced by ragga, dub and grime ever since his days as a student in the UK. The foundations of these genres were laid mainly in Jamaica but found fresh creative wings in urban UK music scenes. This culminated in a hit like Burna’s 2017 song Rock your Body.

Even before the arrival of Love, Damini, Burna Boy had succeeded in melding his diverse cultural and sonic experiences into one powerful aural stew.

Burna has not only cribbed the Jamaican sound. He’s also adopted the rude boy persona with tales of private security gunshots, rape allegations and a trail of broken hearts that have clouded his already threatening aura.

Obviously, Burna was aiming to act as some kind of generational spokesperson for a restless and burgeoning Afropolitan brigade. It couldn’t have been otherwise after being fed on a diet of Kuti-inspired Pan Africanism and neocolonial resistance. By most standards, this is heavy stuff for a market and generation captured by instant gratification.

And then he struck musical gold with his eclectic brew of West African rhythms, West Indian jungle grooves and the ubiquity of hip hop. Burna once described part of this gumbo as “pepperoni pizza” with Kuti’s Afrobeat as the dough. There is nothing particularly unique about this recipe. Instead, the X factor can be found in his own winning combination of ingredients – bound with an arresting personality. Of course, there’s also his amazing dexterity in sampling to ponder.

He has proclaimed that his brand of music is a new genre called Afrofusion. Probably this is just a way of leveraging newfound success for greater effect. A way to distinguish himself from the teeming throng of Afrobeats aspirers.

To the undiscerning, Burna Boy’s sound is pure genius. But for those conversant with Kuti, with Jamaican godfather of dub, Lee “Scratch” Perry, and similar genres of Caribbean toasting (lyrical chanting over dancehall music), it all seems a bit déjà vu.

There are different ways to weigh Burna. If we put him against Kuti, Perry and the greats of dub, he is arguably minor. But in an incessantly Instagrammed era, endlessly photographed and reproduced, he is a giant bristling with substance, creative menace and yet to be decoded signification.

Burna was birthed from robust foundations of Afrobeat, hip hop, ragga, grime, drum ‘n’ bass and dub-related sounds. There are hardly any other foundations as deep as these. His work, up till now, has mainly consisted of translating and reconfiguring those jungle-laden sounds for a mass audience.

In this regard, he is a faithful conduit, a vehicle for simmering, unadulterated and quasi-spiritual grooves. Sometimes, it isn’t even certain that Burna recognises the depth of what he is channelling. If he did, he wouldn’t be so eager to pair up with every hot music star that pops up on the scene.

Burna’s lyrics in hits such as Last Last (2022) are replete with profanity, inanity and nonsense rhymes that sound good to the ears especially if you happen not to understand West African pidgin. This is yet another aspect of his work that can be quite bewildering; the sudden swings between sense and nonsense, pseudo-philosophical gravity and outright puerility.

Lately, Burna has launched a campaign to gain even greater success. Just look at his high profile collaborations with the likes of US musicians Pop Smoke and Beyoncé as well as UK pop stars like Sam Smith, Ed Sheeran, and Stormzy or Nigerian singer Wizkid.

Already, some of his hits are beginning to sound a little laboured, over-thought or under-thought. But perhaps this hardly matters as long as the dollars, brand endorsements and festival invitations keep rolling in. In today’s music industry, that’s all that counts.

Burna Boy has won the world and retained his brooding sense of menace, but it remains to be seen how much of his true creative soul he has left.

Sanya Osha is a Senior Research Fellow at the Institute for Humanities in Africa, University of Cape Town.