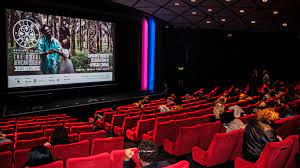 With COVID-19 further impeding the stability and growth of cinema across Africa, it is imperative to promote self-expression and look to the work of filmmakers such as Bassek ba Kobhio and Alain Gomis as models that already exist and would benefit from funding to build and maintain editing and production studios.

If global streaming giants want to stand out as promoters of diversity, equity, and inclusion, they must invest more resources in African cinema to compensate for the shortcomings of a purely commercial approach to streaming.

The economic and social impacts of the pandemic will undoubtedly be felt for years to come. Like elsewhere, African countries have seen cinema closures, shoots shut down, unpaid actors and technicians, and additional job losses.

As African Film Festivals streamed online across North America and Europe and streaming platforms expanded, questions around the future of African cinema have taken new forms. Let’s look more closely at what streaming could offer African cinema in the future; but also, why Euro-American global business models may have serious shortcomings.

African cinema refers specifically to the seventh art—that of cinema—which has historically been crafted on celluloid film by its directors, or auteurs, whose aims have been for Africans to project images of Africans and to inspire thoughtful reactions from viewers, as opposed to Hollywood filmmaking, which is meant to entertain.

Nollywood, which emerged as a popular industry in the 1990s, has stood in stark contrast to auteur filmmaking for its video format and aim to entertain.

In many ways, streaming would appear to be the most viable solution for disseminating and screening movies as well as series and other TV programming at once across and beyond the African continent.

It is not surprising that global media giants, such as Netflix, have capitalized on confinement and expanded their subscriptions by millions. Meanwhile, other streaming platforms, including Showmax, Iroko TV and TV providers Canal+ Afrique have tried to remain competitive during the pandemic despite layoffs. However, the Netflix approach may have negative impacts for African cinema’s future for several reasons.

Currently, many people who have Internet access on the continent (only about 22% of the total population) may have insufficient bandwidth to stream and/or the money to subscribe to streaming services. As Franco-Senegalese filmmaker Alain Gomis has wisely stated: “International success often masks realities on the ground.”

For instance, in one of the continent’s largest economies, Nigeria, streaming services cost the equivalent of USD8 per month, which is enough to buy more than 14 pounds of rice. In the DRC, in addition to being prohibitively expensive, there is almost no capability for streaming throughout most of the country—an example of broadening, rather than narrowing, economic inequality.

Programming is predominantly Hollywood or European content, similar to what France exports through its Canal+. In Senegal, for instance, Netflix shows Kobra Kai, The Karate Kid, American History X, The Fast and the Furious, or French crime films like Balle perdue. One of the few African films streaming on Netflix in Senegal is French filmmaker Jean-Stéphane Sauvaire’s misrepresentative adaptation of Emmanuel Dongala’s novel Johnny Mad Dog. Even Netflix’s Africa Originals are dominated by Western media formats, such as police thrillers, dramas, or romantic comedies.

Further, the vast majority of the Africa Originals are not getting to Netflix subscribers on the continent, in spite of Netflix Head of Africa Originals, Dorothy Ghettuba’s statement that Netflix Africa’s aim is, first, content for African subscribers and, second, for the rest of the world.

In fact, it’s the opposite. Of the more than 30 countries where films like The Mercenary, The African Doctor, The Boy Who Harnessed the Wind, Tsotsi, and Mati Diop’s Atlantics are streaming, none of them is available on Netflix in any African country with the exception of South Africa.

Pandemic or not, African cinema continues to face the two-pronged issue of production and distribution today, 60 years since its beginnings. This has to do with the larger problems of lack of (cinema) industry and financial support for the development of cultural institutions and regional collaborations, such as the short-lived Inter-African Consortium of Cinematic Distribution (CIDC), which shut down in the early 1980s.

Specifically, training facilities are lacking not only for camera operators, actors, writers, and directors but also for editing and editing and production equipment (studios). Movie theatres were already few and far between before COVID-19.

There is much churning and abuzz with regard to cultural production on the continent, which would flourish if given more funding. There is barely support from governments in Africa and the situation is now even worse because of COVID-19.

Further, Abderrahmane Sissako notes that with Europe’s closed borders, it is quite hard for Africans to go there and develop filmmaking techniques, skills, and education. Models that are primed for such developments already exist and would benefit from funding to build and maintain editing and production studios.

The closest today are described, like Gomis does, as a collaboration of “government officials and professionals from the film and audiovisual field” and are the fruits of intense work and networking over decades in some cases.

For instance, Bassek ba Kobhio’s Écrans Noirs festival, which over the past 23 years has grown and had success not only as a festival, has also been instrumental in training actors and directors, promoting local cinema in the Central Africa region, as well as from across the continent.

Taking a similar approach in building the Yennenga Center in Dakar, Gomis makes the point that only local Senegalese who have international connections are likely to make it in the industry, whereas one of his goals is to achieve options even for those who are not able to study or train internationally.

Gomis underscores that teaching and training must be experiential, particularly in the context of the differences between learning cinema in France and in Senegal, where in the former one learns in the classroom and eventually has plenty of movie theaters to show their films yet in the latter the situation is but theoretical and must be translated to the needs of Senegal.

Some government programs, such as USAID’s Young African Leaders Initiative (YALI), have contributed positively to the development of the cinema industry on the continent. In Niger, for instance, Aïcha Macky, an award-winning documentary filmmaker and founding CEO of production company, Production Tabous (Taboo Productions) has benefited from such funding support. In turn, her organization has donated several films to Nigerien television during the pandemic.

On policy and promotion of culture, as Alain Gomis points out, “if film and cultural property are considered to be mere opportunities for financial gain or success, they lose their impact.” Furthermore, as he indicates, diversity on the screen “makes cultural diversity possible.” It is also a good way to recognize African contributions to culture through art, and to elaborate on how African Americans have inspired Africans and vice versa.

As we consider possible futures, including streaming, for African cinema, it is essential to acknowledge that developing such industry in African countries is a complex endeavor, which requires institutions to be built, education and communications technology to be enhanced, with the ultimate goal of supporting filmmakers and valuing human life through telling human stories.

Sara Hanaburgh is a scholar of African cinema and literature and a literary translator. She teaches at Fordham University.