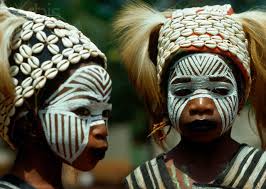 Before the story, let’s attempt to clear some sorry misconceptions.

Colonialism– the occupation, domination, and exploitation of an indigenous land and people by foreign elements–is a fact of world history.

It took place all over the world in the past. It is ongoing in the present.
It will continue into the future.

The foregoing is, of course, no revolutionary or sagely submission.

It is like saying that the weak will always be dominated by the strong, that the big fish would always swallow up the small fish.

It is a harsh, brutal but frank fact of life.

In Africa today, Fulani, an ethnicity with Caucasoid traits, are on the march to colonize weaker, lesser organized ethnicities.

In Nigeria, particularly, the Fulani march has historically been largely successful with their emirates dotting the landscape in Northern Nigeria since the arrival of the legendary conquistador Othman dan Fodio.

Most recently, indigenous populations in Benue and several places in the Middle Belt of Nigeria have been brutally eviscerated and a massive Fulani presence implanted.

This is a step beyond colonization, perhaps, in terminological purity approximating ethnic cleansing if not genocide.

This, again, is a brutal and harsh demonstration of the fact that life is simply the survival of the fittest.

For those Africans who instantly fixate on Britain or Europe, once they hear “colonialism”, the virus is closer home!

In Igbo, the word for slave is oru/ ohu.

In precolonial Igbo, weaker clans were invaded and subdued, and the hapless amongst them enslaved by the stronger.

The legend of the Long Juju of Arochukwu is nothing but the beatification of slave merchandise.

Onicha in Anambra State of Nigeria is probably one of the best-known Igbo cities. What is not so well known is that the original dwellers of Onicha were overrun, subdued, and eviscerated by the people who are today’s indigenes.

Subdued the same way the present dwellers of England are the descendants of the Celts and Anglos and Saxons and Normans who at one time or the other invaded, subdued, conquered, and colonized England.

That supremely hated England was once colonized!

And gulp it down with the reminder that the great USA was once a British colony!

Meaning: Colonization and Enslavement are not peculiarly African heritages or experiences. They are not exclusively African tragedies of history.

So those Africans in this day and age, seizing the leaping upon the occasion of the transition of a FULLY LIVED and ACCOMPLISHED monarch to gloat and lament and bemoan the horrors of colonialism are nothing but poor students of history at best and at worst hypocrites, pretenders as well as intellectual charlatans!

The question they should be asking themselves is why, of all humanity, it is only African nations that remain stuck in the same groove post-colonialism. Why African nations are the only ones afflicted with arrested development? Why are India, Japan, the Koreas, and China –all in Asia are respected world nations whilst their African counterparts are still caught up making the kindergarten case of how colonialism dragged them back?

And I don’t know whether these ultra-radical Africanists are yet alert to the clear and present danger that in their own day and time, African nations like Zambia, Angola, Kenya, Nigeria, etc–who are indebted to China and whose national assets serve as collateral for those loans—are on the journey to being colonies of the Peoples Republic of China!

And so that in addition to the English or French or Portuguese they now have as lingua franca, they may have to start learning some Mandarin, the language of the future.

Read the last part of the sentence again.

For emphasis: Mandarin may become the language of African future.

Mòòmi is the vernacularization of Mummy the name my siblings and I and other familiars used for my departed mother.

One day, Mòòmi told me a bizarre story.

She said that there was this old woman that once lived in my paternal Isoko land with no husband, no children, and no known near relatives.

She lived all alone in a hut near the bush.

One day, the story goes, the village was thrown into bewilderment by the arrival of three white men. Upon being taken to the palace of the Ovie and questioned as to the object of their visit, the white men were able to explain that they were looking for an old woman. Upon further interrogation, the villagers understood that the object of the white visitor’s search was the old woman who lived all alone. And so, wondering what this would lead to, the Ovie despatched his messengers to take the white men to the old woman’s abode.

Getting there, they– the visitors and messengers– found the hut empty and settled themselves on a long bench in front of the hut awaiting the homeowner’s arrival.

They didn’t have to wait long before, from the bushes, they saw emerging a figure, ancient, gaunt, and female, doubly bent under the burden of twined faggots.

Coming closer it became clear it was the old woman whereupon the white aliens leapt to their feet!

“What is happening here?”, they screamed. Madam…., is this where you live? In such backwardness and poverty? This is unbelievable! No wonder Africa is the way it is. No wonder Africa remains a dark continent!”

That these white men however had a boss, a master to whom they always referred aeronautical problems that eluded their understanding.

That time and again, this boss, none other than the old woman from Africa, had solved knotty problems that defeated every other attempt.

And so when the latest problem arose and they could not locate the old African scientist in the spirit realm where she held sway, they traced her to the physical to do as she was wont to.

Only to discover the staggering disconnect between her spiritual status and her physical life!

Mòòmi told me this fantastic story when I was barely in my teens.

And, considering it then as one of those fantastic lores villagers are sometimes known to spin, it totally departed my memory. That was until decades later when it was forcibly restored.

This happened when on a visit with my then partner to the departed famed musician Sonny Okosuns, during which visit three straight nights were spent on intense discussions around spiritual matters, he told this story as a fact he was aware of.

Okosuns, in addition, mentioned the existence of certain places in the Midwest from where one could port into any desired geographical location in any part of the world within the blink of an eye.

The question I asked Okosuns that day was: why with these tremendous and magnificent spiritual assets–Egypt stands unchallenged as the birthplace of scientific knowledge– Africa remains poverty-stricken, debt-ridden, disease burdened, hopeless, helpless, and hapless?

Okosuns– God bless his great soul– could not provide an answer those wee hours of the unforgettable morning of that discussion.

Perhaps this generation of Africans may provide the answer.

And the answer may save us the abasement of demotion to human vultures, lying in wait for the demise of a global potentate to feast on lachrymal dinners of what would have been if what had not taken place!

Martin Ezimano is a poet, dramatist, and scholar who served as the Association of Nigerian Authors’ (ANA) Legal Advisor

Frida Kahlo: A Ribbon Around A Bomb