Home Africa Zimbabwean President Fears US, West Will Use Covid-19 Vaccines To Topple Him 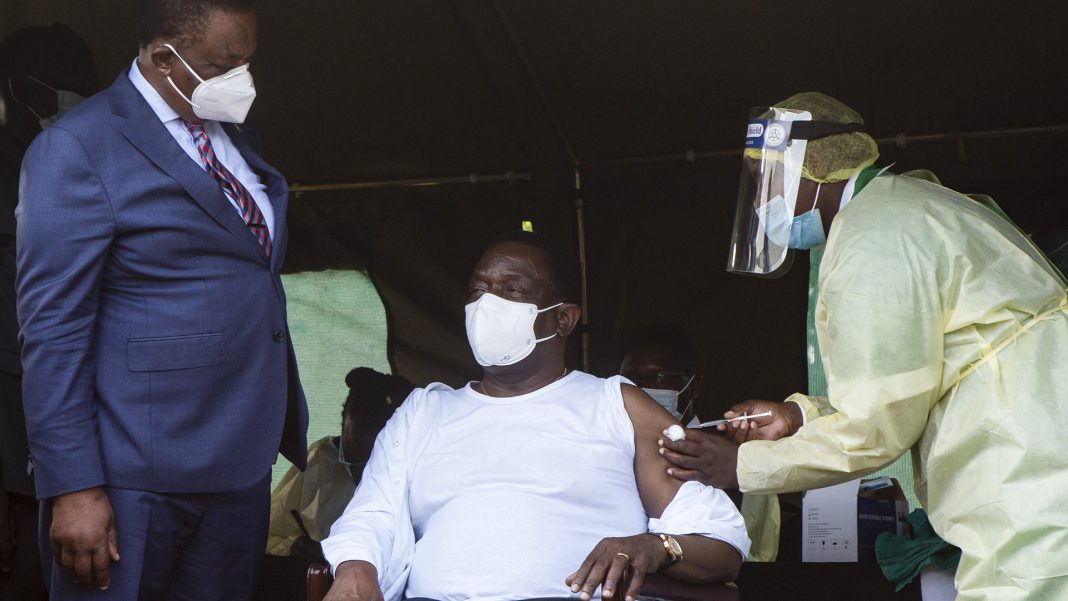 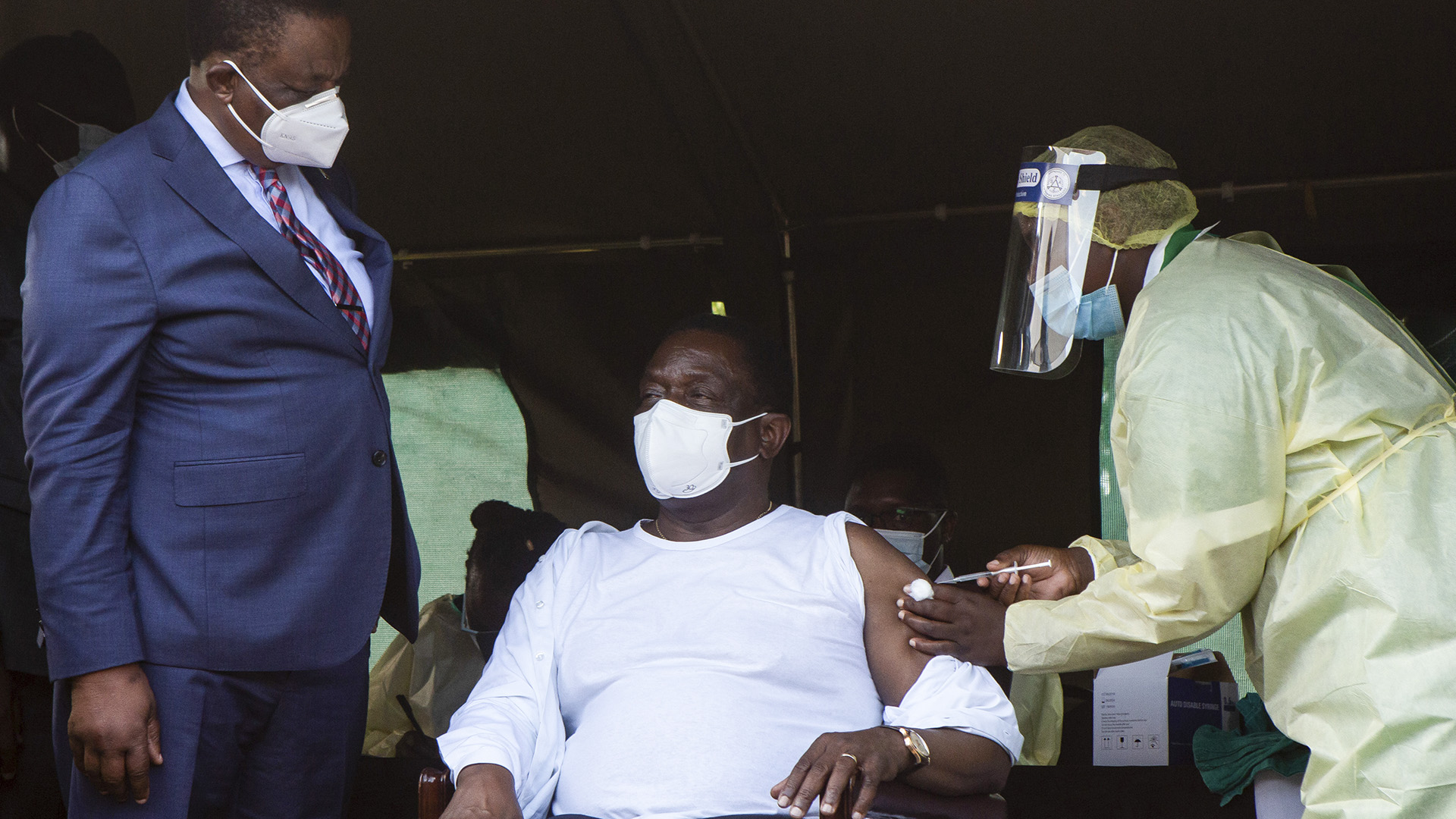 HARARE, Zimbabwe — Zimbabwe President Emmerson Mnangagwa’s administration is increasingly suspicious that the United States and Western countries could use Covid-19 vaccines to influence a regime change in the southern African country.

The United States, Britain, and European Union have since 2000 called for political reforms in the nation following a chaotic land reform program and human rights violations.

Furthermore, the western powers have slapped the country, including its ruling elites within the Zimbabwe African National Union-Patriotic Front party, with economic sanctions that have brought its once vibrant economy to its knees.

Since the advent of the Covid-19 pandemic that has killed more than 3,170 people in the country, the Mnangagwa administration has snubbed western-manufactured vaccines in favor of those “foul weather friends”—China, Russia, and India.

Until recently, Harare had approved only China’s Sinopharm and Sinovac, Russia’s Sputnik V, and India’s Covaxin vaccines for use.

The British-Swedish Oxford-AstraZeneca, Pfizer, and Moderna from the United States—all from perceived hostile countries with a regime change agenda—have not been cleared for use in the country.

On July 28, 2021, the government approved vaccines from American manufacturer Johnson & Johnson but did not indicate when they will arrive in the country.

Mnangagwa’s spokesperson, George Charamba, accused the United States of undermining public goodwill towards the government by allegedly donating half a million doses of Johnson & Johnson vaccines to the main opposition party, the Movement for Democratic Change-Alliance, to run a parallel vaccination program.

“MDC-Alliance is in a bit of a bind which it now seeks to resolve, abortively aided by the undiplomatic US man here,” tweeted Charamba on July 19, 2021.

“They have been given two tranches of American vaccines, in total amounting to half a million doses, for a political vaccination program through which they hope to checkmate the goodwill that has accrued to ZANU-PF through a sprite public vaccination program. The two vaccines they have been given are not registered in Zimbabwe. Therein lies their dilemma!!! The laws of the country do not allow the importation of unregistered vaccines!!!”

He further stated: “The US Embassy strategy has been to desperately stampede the Ministry of Health to allow the government to accept importation and administration of those unregistered vaccines, using Covax facility. This would then provide cover for this political donation.”

“Unfortunately for them, Chinese, Russian and Indian vaccines, which are now registered for use in the country, are now registered with the WHO (World Health Organization), making them part of the Covax menu. Zimbabwe insists that any assistance under Covax limits itself to those registered vaccines. The US and their MDC-Alliance lackeys are in a real bind.”

Both the United States embassy in Zimbabwe and the opposition party refuted the claims.

“I repeat: the MDC Alliance has not received vaccines from any person or organization,” said the Movement for Democratic Change-Alliance spokesperson, Fadzai Mahere, in a tweet.

“It’s a matter of regret that Charamba continues to act in this disgraceful manner. He is telling lies and playing politics with people’s lives instead of focusing on curbing vaccine hesitancy.”

Health officials in the country steered off the controversy.

“The process of approving vaccines locally is done after we conduct our clinical trials with the Medicines Control Authority of Zimbabwe,” Agnes Mahomva, the national Covid-19 taskforce chief coordinator, told Zenger News.

“Our decision was purely based on our satisfaction from the trials—nothing political.”

Zimbabwe’s vaccination program has been relatively slower during the third wave, with some vaccination centers running out of stock.

In June 2021, Zimbabwe turned down an African Union donation of three million doses of the Johnson & Johnson Covid-19 vaccine citing a lack of storage facilities, and expressed the government’s reservations about the vaccine’s possible side effects.

However, the same facilities are storing vaccines from the regime “friendly” countries.

“There is this deep-rooted notion within the ruling party that the United States and its western allies always have sinister motives each time they engage with Zimbabwe,” Claris Madhuku, a political analyst and the director of Platform for Youth Development, told Zenger news.

“This stems from the strained relationship between Washington and Harare over the past two decades over alleged human rights violations by the ruling party.”

Elites within the ruling party view American sanctions as part of Washington’s plot to cripple the economy and provoke political instability to topple the government.

The business mogul’s company, Sakunda Holdings, which the United States also designated, is a crucial supplier of petroleum in Zimbabwe.

In July 2020, the acting spokesperson for the Zimbabwe African National Union-Patriotic Front, Patrick Chinamasa, called the United States ambassador to the country, Brian Nichols, a “thug” during a press conference,

“He (Nichols) continues to engage in acts of undermining this republic, and if he does so if he continues engaging in acts of mobilizing and funding disturbances, coordinating violence, and training fighters, our leadership will not hesitate to give him marching orders,” Chinamasa said.

However, other political observers think the Zimbabwean administration may not be apprehensive of the United States’ intentions but would wish to take the opportunity to engage and mend relations.

“I wouldn’t see it as a way of worsening relations between Zimbabwe and the United States,” political commentator Earnest Mudzengi told Zenger News.

“Perhaps Mnangagwa’s administration is looking at this as an opportunity to use vaccine diplomacy to mend relations with Washington and the Western countries. Remember, he has been pushing for re-engagement since he came to power in 2017.”

The post Zimbabwean President Fears US, West Will Use Covid-19 Vaccines To Topple Him appeared first on Zenger News.