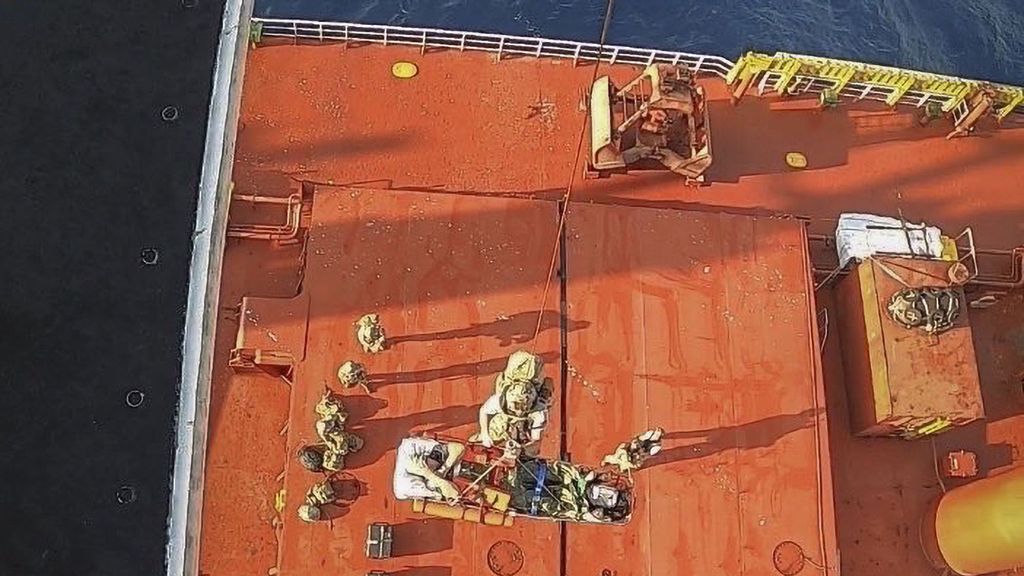 Video shows a U.S. Air Force team rappelling onto a cargo ship in the Indian Ocean to assist a civilian mariner who was experiencing symptoms of a heart attack.

The team spent a couple of days on board to stabilize the British patient, as the ship was far offshore.

U.S. Africa Command (AFRICOM), which is responsible for military activities in the region, said that the British mariner, who was not named, was saved by medics who were called out to the U.S.-flagged Liberty Grace cargo ship in the Indian Ocean, about 500 nautical miles east of Kenya.

“Members of the Warfighter Recovery Network received an urgent request for a mariner experiencing symptoms of a heart attack,” the group’s post said.

A team of five U. S. Air Force pararescuemen aboard an MV-22B Osprey tilt-rotor aircraft were deployed to rappel aboard the ship and stabilize the patient. “Due to the vessel’s distance from shore, a U.S. Marine Corps KC-130 tanker deployed to provide aerial refueling of the Osprey’s,” the Warfighter Recovery Network said.

“We then transferred the patient to a DHC-8 airplane, which enabled our final turnover to a medical facility in Nairobi that provided the appropriate level of care,” said U.S. Air Force Master Sgt. Trevor Clark, 82nd Expeditionary Rescue Squadron pararescueman.

“The patient is doing well, and I am so proud of my team for their part,” he said. “While this mission presented unique circumstances, we adapted to what was given.”

“The tyranny of distance in Africa cannot be overstated, especially during life-threatening medevac situations. While the primary mission of Warfighter Recover Network is to rescue our military personnel during operations in Africa, its robustness allows for unique missions like this. We are all grateful for the pilots, crews, medics, and rescue professionals and the courage they demonstrate to help anyone under duress.”

The mission of rescuing injured personnel in the U.S. Africa Command area of operations is exceptionally complex due to the geographically wide distribution of forces and dynamic security environment found throughout much of Africa, the Warfighting Network said.