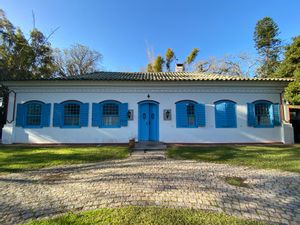 PELOTAS, Brazil — The Charqueadas Route, in the city of Pelotas, in southern Brazil, is a tourist path where people can visit colonial buildings and listen to controversial stories. Rice and cattle are the core of the city’s economy, but at the end of the 18th century, it stood out for the production of charqui, a type of jerky. Charqui was sent to almost all of Brazil in exchange for a precious product, sugar.

Charqueadas were large commercial farms located on the Pelotas stream’s banks, which were lined with colonial mansions. Food production required arduous and repetitive work, which was carried out by African slaves from Angola and Mozambique.

The charqui cycle in Rio Grande do Sul lasted from 1780, when José Pinto Martins built the first charqueada, until 1930. Between the 18th and 19th centuries, there were more than 40 charqueadas on the Pelotas’ banks.

About 1,200 slaves lived in Pelotas. The Portuguese sent them to serve the noble class, and they used to work uninterrupted for 16 hours a day. Slave owners sent disobedient slaves from northern Brazil to work in Pelotas’ charqueadas as punishment. Their life expectancy was no more than 30 years.

Everything, “from the production of rubber, sugar and coffee to mining — Brazil’s entire economy during that period — depended on slave labor. Brazilians considered the charqui [as important as] oil, as it was the fuel that moved Brazil’s economy,” said Marcelo Mazza, 56, the owner of Charqueada São João, built in 1810.

To make charqui, cattlemen began by weakening the ox, throwing spears at its head and legs. Then, they would lift it turning it upside down, and slaves would slaughter it. The skin would be kept for leather and the meat would be sliced and marinated in brine for 24 hours. Then they would cover it with salt and hang it on clotheslines to sun-dry for a week.

“The purpose of this process was to dehydrate the meat, preserving it for much longer, since at that time there was no refrigeration. The charqui could last up to a year and, when it was ready, people would transport it by boat to the port of Rio Grande, and from there to other coastal regions of Brazil,” said Mazza.

Charqueada São João preserves its original construction components and has operated as a museum for two decades. It displays slaves’ tools, including a salt shovel, the killing knives, and the hooks that suspended the meat steaks. The place also keeps handcuffs, iron collars, shackles and a 20-pound iron ball that was connected to the slave’s ankle.

The charqueada keeps the original facade of a senzala, a room with a small, barred window. Slaves used to sleep crowded together on senzalas’ hard floors. There is also a replica of the “pelourinho,” the “whipping post,” used to punish slaves. Slave owners would mark with a hot iron the faces of those who tried to flee with the letter “F” — which stood for “fugitive.”

Charqueadas had a small bell next to the entrance door to signal the beginning and end of the slaves’ working day and alert them to the arrival of rain so that they could protect the charqui with leather.

Brazilians use the expression “made in nas coxas” to describe something badly done, in a precarious way or without much effort. The term comes from the times of slavery in Brazil, says Fábio Ludtke, 32, the official of Charqueada Santa Rita. Built in 1826, Charqueada Santa Rita is the only building of this type that operates as an inn.

Usually, “slaves worked in charqueadas from November to April, when there is more sun in the region. The rest of the time, they made bricks and clay tiles using their thighs at the brickworks. The size and format varied from person to person, which is why people say they were poorly made,” he said.

“I am interested in [studying] slavery during that period, how our state of Rio Grande do Sul was built. … Although [the buildings] have this charm and there is a certain romanticism around charqueadas, there was also much suffering and sadness in them. Today, we have to give them a new meaning. It is important that we learn from that suffering to avoid being a people who exclude [parts of] the history of our state and country,” she said.

Charqueada Santa Rita’s historical collection includes an old boat made of cork — the cork tree is native to the region — covered with a sacrificed ox’s hide. “The small boat was named ‘pelota.’ Pulling it by a rope they grasped between their teeth, the slaves crossed the stream carrying the charqui. The masters used pelotas as well. Hence, the origin of the city of Pelotas’s name, which comes from the Spanish language,” said Ludtke.

Choreographer and artistic director Daniel Amaro, said that Pelotas’s charqueadas left a great legacy for the Brazilian people, with cultural expressions such as samba, carnival, African dance and African-based religions, including the batuque.

“Africans who came here worked in salt [mines], they had a hard job and had to endure the cold. … There was a time when blacks took refuge to observe their culture, either under a fig tree, in front of the senzala, dancing, playing drums and practicing capoeira games. The Afro-Brazilian culture was born from these customs, as a new cultural construct,” he said.

Slaves also created in the senzalas dishes that today are popular throughout Brazil, including “feijoada” and “mocotó.”

Politicians “do not want to know what happened in the past”

On the Charqueada Costa do Bolengo, visitors can practice horseback riding and fishing. The large house with white walls and green windows is abandoned. The owner, Diego Noble Marshall, said he is working to transform it into an inn in a few months.

The nearby Charqueada Boa Vista dates back to 1811. Today, the place is used for weddings, graduations, christenings and other events that comply with health agencies’ requirements to prevent the spread of the coronavirus. Here, visitors can enjoy a colonial coffee — a traditional meal including bread, cold meats, cheese and honey, accompanied by milk, coffee, hot chocolate or wine — have a picnic or have lunch with the family.

The property currently belongs to the 60-year-old Argentine Alejandro Donaldo Eduardo Marshall, who moved there in 1989 and began restoring the premises. He has preserved the original characteristics of the house, which is on a 24-acre property.

“I feel a bit of denial from local politicians regarding road maintenance on the Charqueadas Route,” Marshall said.

“Pelotas celebrates Fenadoce, the Sweet Fair, since the city is the national capital of sweets, but we still lack a fair related to charqui … [which happens] because there is a denial of the Pelotense society, especially of the political authorities. They do not want to know what happened in the past.”

With 24 acres, Charqueada do Cascalho has a colonial-style mansion built in 1876. It belonged to Col. Pedro Osório, who died at the age of 77 in 1931. The military man was a drover, charqui producer and politician. According to his great-great-granddaughter, Marina Rheingantz Gomes, Osório was considered the King of Rice for closing the charqui cycle in the region and opening the rice period in southern Brazil. He started his first rice plantation in 1907.

She opened the house exclusively for Zenger. “Like in all charqueadas, the house is in front of the Pelotas stream, which used to be the only access to transport the charqui,” she said. She is considering opening the house to receive tourists and rescue charqui’s history in southern Brazil.

Translated and edited by Gabriela Olmos; edited by Kristen Butler

The post The Charqueadas Route Is A Reminder Of Brazil’s Slavery Period  appeared first on Zenger News.