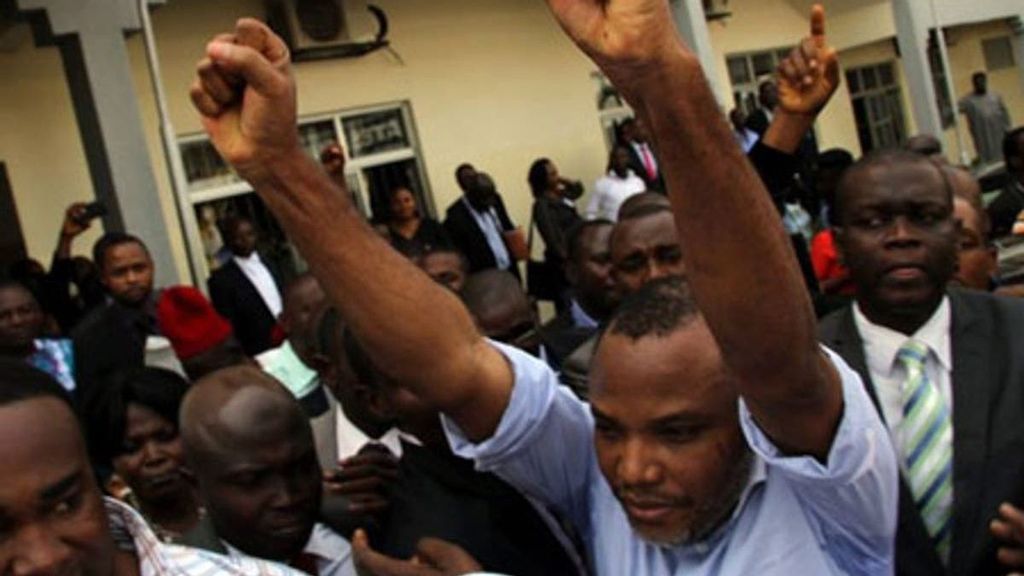 LAGOS, Nigeria — The leader of a Nigerian indigenous separatist group who was deported from Kenya earlier this year, is seeking to win passage back to the United Kingdom by suing the governments of Nigeria and Kenya for illegal arrest.

Nnamdi Kanu, a British citizen and the leader of the secessionist Indigenous People of Biafra, has sued the Nigerian government for $12 million in damages, naming the Kenyan government as co-accused for what he says was illegal extradition. He has asked to be sent back to Kenya — where he says he was “abducted” — so he can return to the U.K.

The case is scheduled for Oct. 21 at the Abia State High Court in Nigeria’s southeast.

His brother, Kingsley Kanu, sued on his behalf, according to documents seen by Zenger.

In the petition, Kanu requests that the court to declare his extradition “a violation of the fundamental rights and freedoms to equal protection of the law, human dignity, freedom and security, freedom of movement, fair administrative action, access to justice, the right to be represented in court and a fair hearing as guaranteed in the Constitution of Kenya.”

“Kanu’s legal team in Kenya, Luchiri Associates, filed the suit on Sept. 14,” Ejimakor told Zenger. “Because Kanu is a British citizen who entered Kenya on a British passport, he should not have been extradited to Nigeria for any reason without valid court orders.”

Kenya’s Interior Cabinet Secretary, the director of immigration, the director of criminal investigations, the officer commanding Jomo Kenyatta International Airport Police Division, and the attorney general are respondents in the petition.

Following his June 28 arrest in Nairobi, Nigeria’s Justice Minister, Abubakar Malami, said Kanu was “intercepted through the collaborative efforts of the Nigerian intelligence and security services. He has been brought back to Nigeria to face trial having jumped bail.”

However, the Nigerian government has not disclosed where they arrested him.

But his attorney said Nigerian investigators seized Kanu in Kenya, held him incommunicado, and chained him to the floor for eight days in a Nairobi private facility.

“The people that abducted him said that their sponsors told them that Kanu was a Nigerian terrorist linked to the Islamic terrorists in Kenya, presumably Al-Shabaab,” Ejimakor told Zenger. “Days later, they discovered his true identity and tended to treat him less badly. Despite that, they told him they felt committed to hand him over to those that hired them.”

George Wajackoyah, a counsel representing the detained separatist leader in Kenya, told the media Kanu had provided them copies of his passport proving he had been in Kenya.

“We also have evidence he was in his residence on that particular day. We also have material proof that he was at the airport on a particular day to meet a friend, and that is where they arrested him,” Wahackoyah said.

Kenyan diplomats in Nigeria have denied any participation in the matter and called the accusation “deliberately fabricated to fuel antagonistic attitudes in the minds of certain elements of the Nigerian people against Kenyans.”

Kanu was first arrested in Oct. 2015 and charged with 11 counts of terrorism, with the courts granting him bail on health grounds in April 2017. The military then moved into the southeast region in Sept. 2017 to neutralize the secessionist movement in Operation Python Dance, and Kanu fled the country. After his extradition from Kenya this year, authorities prosecuted him in a Federal High Court in Abuja without a lawyer present.

Kanu admitted to the Abuja Federal High Court that he had violated the terms of his bail, but said he had fled to Kenya in fear of his life if he had stayed.

Kanu was born on Sept. 25, 1967, during the Nigerian War, where the Eastern Region, comprising the five federal indigenous Igbo-majority states, had unilaterally declared independence. The separatists created a new country called the Republic of Biafra on May 30, 1967, with army Colonel Chukwuemeka Odumegwu Ojukwu, as its leader.

The move triggered a two-and-half-year conflict that ended in Jan. 1970 with Biafra’s surrender.

Kanu formed the Indigenous People of Biafra in 2014 to revive old Biafra’s secession dreams due to what he termed marginalization of the Igbo people by the government of President Muhamadu Buhari.

His politics have polarized opinions in the country.

In 2020, the insurgency group formed the Eastern Security Network, an armed wing blamed for a series of violent attacks on police stations, electoral offices, and other government assets in southeast Nigeria.

Kabiru Adamu, a security analyst, said that the Nigerian government’s transparency would be critical in dealing with the public’s reaction to Kanu’s trial.

“The government would have to present clear and persuasive proof of Kanu’s guilt in all the charges leveled against him,” he told Zenger.

“He must be tried in a way that will persuade everyone that the trial is free of political intervention.”

Nigeria’s Minister of Information, Lai Mohammed, assured that Kanu would receive a fair trial and treatment in his 11-count treasonable felony, terrorism, and illegal possession of firearms charge, pending before a Federal High Court in Abuja.

“So far, the forensic investigation has unearthed a gold mine of material on the outlawed … commander and his associates,” he told local media during a press briefing in Nigeria’s presidential villa just after Kanu’s arrest. “I can tell you that Kanu will not be denied the fair deal that he deprived many of the victims of the violence that he intentionally encouraged through his Eastern Security Network, broadcasts, and tweets.”

Mohammed alleges that Twitter allowed Kanu to use its platform to call for the killing of police officers, and the company allegedly failed to take down the tweets despite repeated requests by the Nigerian government. This has caused friction between the Nigerian government and Twitter, which suspended Buhari in May 2021 over a tweet threatening violence in the southeast region.

In retaliation, the government halted Twitter’s operations in Nigeria.