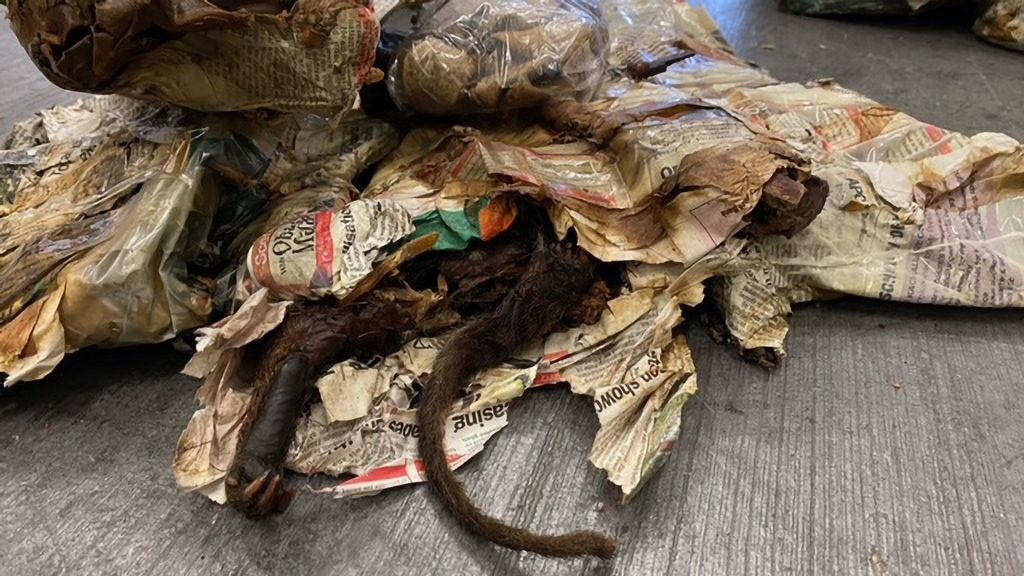 Decaying porcupines and antelopes, among a vast quantity of other bushmeat being smuggled into Germany, were seized by customs officials at Cologne/Bonn airport.

“In the past few weeks, Cologne customs … prevented the smuggling of ‘bushmeat’ in parcels from Nigeria,” Jens Ahland, a spokesperson for the customs office, said in a Dec. 1 statement. “Bushmeat is a specific African term for game meat from animals that are hunted in the jungle or in the savanna.

“In addition to four galagos, also known as bush babies, a porcupine and an antelope, we also found large quantities of rotten fish, crustaceans, cowhides and snails. In total, we found almost half a ton of the mostly roasted or smoked animals,” Ahland said.

The 15 parcel shipments, which weighed between 220 pounds and 600 pounds  were on their way to private individuals from Germany, but also France and Belgium, Ahland said.

“The animal carcasses, which were only packed in newspaper and plastic bags, lay between large amounts of clothing, pharmaceuticals and cosmetic products,” Ahland said.

In addition to the animal components, Ahland said, the complete package contents often had to be attended to by veterinarians from the Environment and Consumer Protection Office “due to strong maggot and mold infestation.”

The infestation was so bad that “the airport border control point of the city of Cologne will be destroyed,” Ahland said.

Bushmeat is described as meat from wild animals hunted predominantly in Africa. It has long been used in local dishes and street foods, and it is also regularly smuggled to other countries to meet expat demand. It can pose grave health risks and is said to contribute to the spread of zoonotic diseases, such as Ebola, via fruit bats.

In an article titled “The Illegal Commercial Bushmeat Trade in Central and West Africa,” published by the United Nations, anthropologist and environmentalist Jane Goodall, wrote: “For many wealthy African city dwellers, bushmeat is a status symbol proving that they can stay true to their culture. Some of the meat even finds its way to African communities overseas.

“It is not only wild animals whose lives are threatened by the bushmeat trade — people do not appreciate the risks to their own health. There is increasing evidence of the danger to humans caused by handling, cutting the flesh and cooking certain kinds of wild animals.

“The Ebola virus, devastating more and more areas of West Africa, is thought to be transmitted by fruit bats, initially to chimpanzees, gorillas and bonobos. These apes may become infected from handling fruits contaminated by bat feces, and can then pass the disease on to humans.”

Goodall said education is imperative: “It is clearly of utmost importance that conservation organizations … invest heavily in education, since many local people do not understand what is going on.”