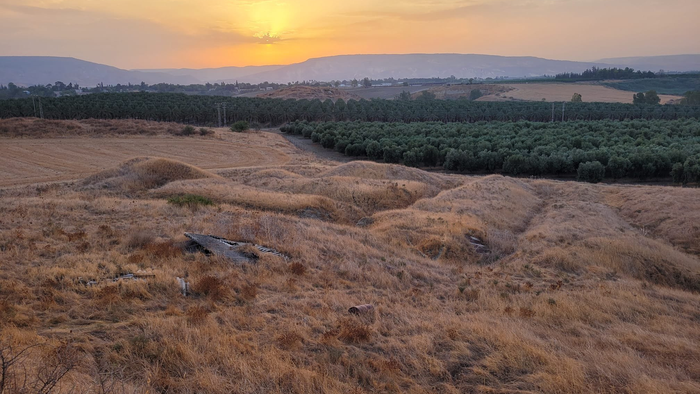 An ancient human vertebra at the ‘Ubeidiya archeological site in the Jordan Valley, just south of the Sea of Galilee, provides evidence that human migration out of Africa came in waves and was not a one-off event as previously believed.

The first wave of human migration from Africa to Eurasia reached the Dmanisi site in the Republic of Georgia in the Caucasus Mountains about 1.8 million years ago. The hominin fossils at Dmanisi have been identified as Homo erectus. In the journal Scientific Reports, researchers report that another wave has now been documented at the ‘Ubeidiya site, registered as occurring about 1.5 million years ago.

The study, led by Alon Barash of Bar-Ilan University in Israel, noted that the ‘Ubeidiya site is one of very few places that has offered relics of human movement from the cradle of human life in Africa to the wider world.

It is the second-oldest archeological site outside Africa, where years of work have uncovered human artifacts and the fossilized remains of animals no longer found in modern Israel, such as mammoths and giant buffalo. Archeologists have also found evidence of modern species that are no longer seen in Israel, including baboons, warthogs, hippopotamuses and giraffes.

Although the fossilized human lumbar vertebra was first unearthed in 1966, the latest study used new absolute dating methods to refine the site’s dating. At approximately 1.5 million years old, the vertebra is the earliest fossil evidence of ancient humans ever discovered in Israel.

Barash said it answers the debate on whether human migration initially occurred as a single event or in multiple waves.

“Due to the difference in size and shape of the vertebra from ‘Ubeidiya and those found in the Republic of Georgia,” Barash said, “we now have unambiguous evidence of the presence of two distinct dispersal waves.”

Co-author Ella Been said the vertebra belongs to an exceptionally tall youngster age 6 to 12 years old, who as an adult might have reached a height of 5 feet 10 inches. “This ancient human is similar in size to other large hominins found in East Africa and is different from the short-statured hominins that lived in Georgia,” said Been.

“It seems, then, that in the period known as the Early Pleistocene [2.6 million to 700,000 years ago], we can identify at least two species of early humans outside of Africa. Each wave of migration was that of [a] different kind of humans –– in appearance and form, technique and tradition of manufacturing stone tools, and ecological niche in which they lived,” said Barash.

The stone implements found at ‘Ubeidiya resemble those used by ancient humans in East Africa.

“The stone and flint artifacts from ‘Ubeidiya — hand axes made from basalt, chopping tools and flakes made from flint — are associated with the Early Acheulean culture,” said Omry Barzilai of the Israel Antiquities Authority.

“Previously, it was accepted that the stone tools from ‘Ubeidiya and Dmanisi were associated with different cultures — Early Acheulean in ‘Ubeidiya and Oldowan in Dmanisi. After this new study, we conclude that different human species produced the two industries.”

“Our new finding of different human species in Dmanisi and ‘Ubeidiya is consistent with our finding that climates also differed between the two sites,” said study co-author Miriam Belmaker with the University of Tulsa. The current study also used the new dating methods to examine the region’s paleoecology and paleoclimate.

“’Ubeidiya is more humid and compatible with a Mediterranean climate, while Dmanisi is drier with [a] savannah habitat. This study showing two species, each producing a different stone tool culture, is supported by the fact that each population preferred a different environment.”