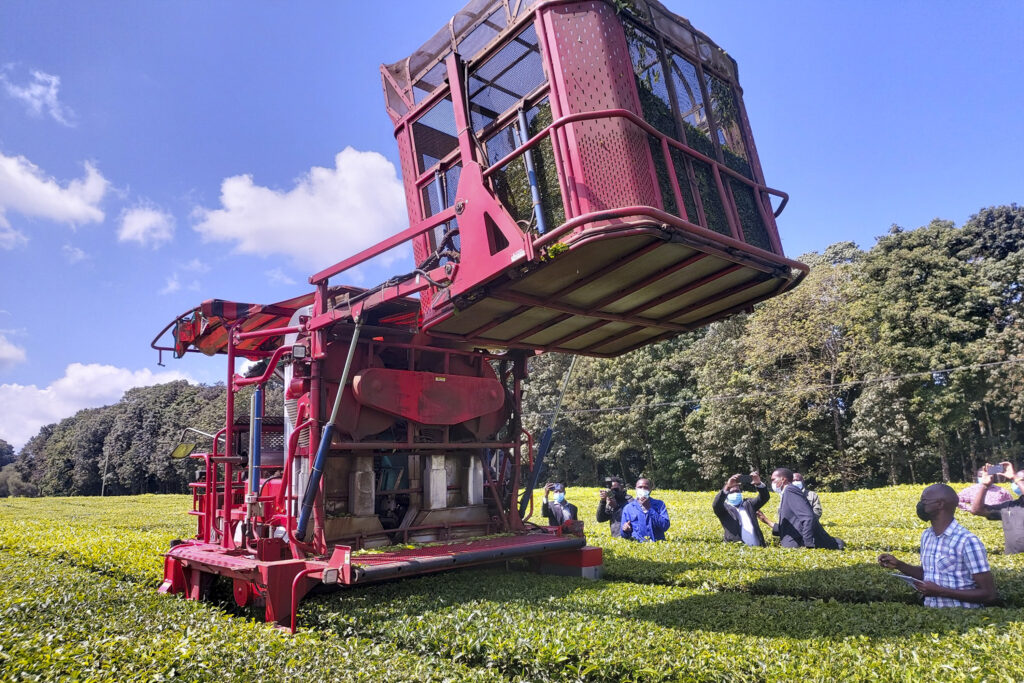 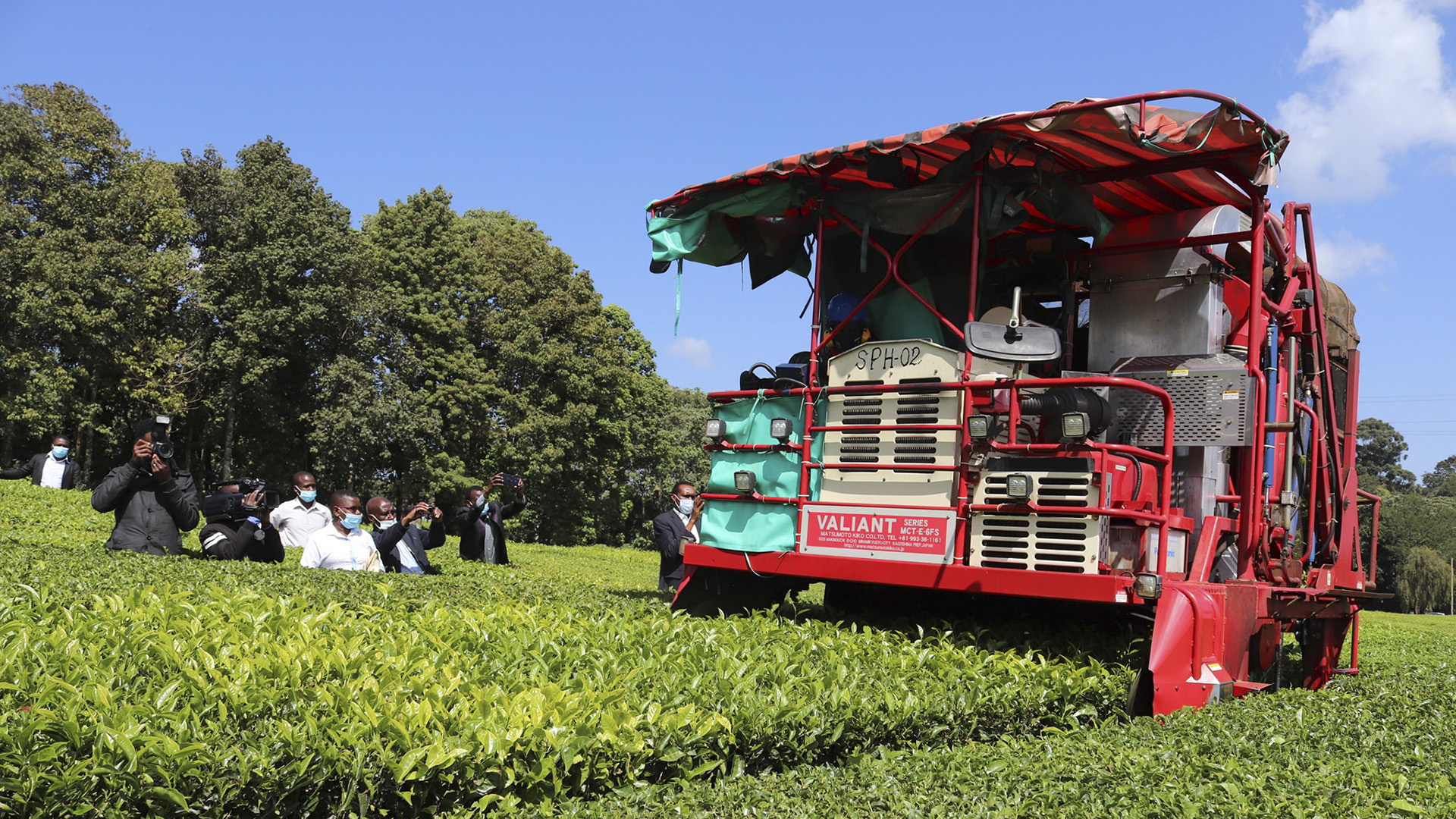 NAIROBI, Kenya —Mercy Nandutu, 42, a single mother of two, left her native home in Chwele, western Kenya, more than a decade ago to work in the tea plantations in Kericho County—the leading tea producer in the country.

“I started picking tea by hand in 2010, which has been my only source of livelihood since then,” she told Zenger News.

“I could comfortably pay my children’s school fees from the tea picking earnings. However, the future looks bleak.”

Nandutu is among the thousands of hand tea pickers from Kenya’s tea belt in the Rift Valley who might lose their jobs as plantation owners mechanize tea plucking operations.

“We rarely get jobs, and as time goes by, we might lose our jobs like some of our colleagues. Before these machines arrived, I’d make up to Sh15,000 [$136] in a month, depending on the payment terms of the tea farm owner. After the introduction of the machines, our wages plunged to below Sh10,000 [$90].”

The tea farms of Kericho draw most of their workforce from the women-folk, like Nandutu mainly undertaking tea picking in the farms, states a report commissioned in 2018 but released in 2019 by the International Federation of Women Lawyers.

Since women are the majority in the tea farms, they have been disproportionately affected by the mechanization of tea operations, said the report. However, job losses are happening across genders.

Julius Kirui, 30, from neighboring Bomet County, lost his job as a tea picker two months after the owner of a plantation he worked at introduced the machines.

“I lost my job in March when my farm boss introduced the tea picking machines,” he told Zenger News.

“Hundreds of us are now jobless and are surviving on menial jobs. It’s tough.”

His parents worked as tea pickers, earning low pay and could not pay for Kiru’s education after he finished high school in 2008. He decided to join his parents in the tea farms, picking tea from dawn to dusk.

“My entire family has depended on this job. However, because of their age, my parents can no longer work on the tea farms. My younger siblings and I had to take over and let them rest. Unfortunately, the introduction of tea picking machines has rendered us jobless.”

“A single machine can do what 20 people used to do,” he told Zenger News.

For years, the major tea farms in the region campaigned to substitute manual with mechanized labor in their tea plucking operations, which they said is cheaper and more efficient.

However, these attempts always met stiff resistance from unions, especially theCentral Organization of Trade Unions-Kenya,which the Kenya Tea Workers Union is a member of.

Despite the unions’ resistance, the tea estates gradually introduced the machines at a low scale as far back as 2006, which saw significant job losses in the sector.

“The numbers have been increasing yearly. We call on the national government to intervene and save tea workers,” Sang told Zenger News.

Despite their numerous protests against the mechanization of tea farms by the Central Organization of Trade Unions, tea workers are yet to see any positive feedback because the Kenyan court allowed the tea farms to use tea picking machines.

He promised tea workers that the battle is not lost and that the union will do all it can to restore order in the tea farms by talking with the government.

“I am aware that thousands of tea workers have been laid off this year, but let me assure them that we will sort out this issue as soon as possible,”Francis Atwoli, the secretary-general of the Central Organization of Trade Unions-Kenya, told Zenger News.

“We are in talks with the government over this issue.”

However, according to Apollo Kiarii, the chief executive officer of theKenya Tea Growers Association, the machines are here to stay.

“Unfortunately, thousands of Kenyans employed in tea farms are losing their jobs,” he told Zenger News.

“We had to embrace the machines to save on the tea harvesting and production costs. It will help our tea sector to stay afloat. This is a global revolution you cannot fight.”

Kiarii said that with the introduction of these tea plucking machines, most tea farms had reduced their production cost by around 50 percent.

With Kenya competing globally in the tea market, Kiarii says it is high time to embrace modern farming technology.

“We compete for the same tea market with developed countries such as China, India, and Argentina. These countries are using machines to harvest tea, and for us to catch up with them, we must join the bandwagon and embrace mechanization.”

Cabinet Secretary for Labor and Social Services,Simon Kiprono Chelugui, visited James Finlay’s Tea Company in August 2021 to assess the operations of the machines.

“The Kenyan tea sector plays a crucial role in our national Gross Domestic Product and is estimated to employ over 200,000 workers directly, and indirectly over 2 million workers,” he said in a statement during the visit.

“Over the years, agricultural mechanization has been rising steadily within the country, leading to the replacement of manual labor. My ministry supports mechanization because we cannot fight with technological advancement.”

He promised affected tea workers that he would look into their woes.

Kenya is third in the production of black tea globally, according to a 2017World Bank reportthat also found that tea farming supports ten percent of Kenyan livelihoods.